I'm not going to lie, you guys. It was hard for me to put this one in the mail and send it off to its intended recipient.

I know, I know, I can just make one for myself again later. But it's not always that easy! First of all, it's not every day you find a major score at the thrift store: 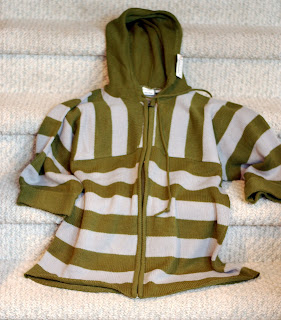 Not only was this sweater snuggly, cute colors, and in good shape, it was also Goodwill's 1/2 price color of the week, making it a mere $3.50. AND it was a size 2XL, giving me TONS of knit to work with. Although I do feel a little guilty taking one of the few cute plus-size items available at a good price at Goodwill just to cut it up--but I'll learn to live with it.

I decided to make an infinity cowl scarf, like I'd done before, but because of the shapes of the pieces I had once I cut up the sweater (shown below):

I made one large rectangle (18" by 100"), folded it in half lengthwise, and sewed one seam all the way down to make my tube instead of making two long strips. Then I turned the tube right-side-out, and closed it up with the machine for as far as I could go, leaving about two inches that I had to hand-sew with an invisible seam at the end.  This tutorial explains this really well--that's where I learned it.

This finished scarf is wrapped around my neck twice and is the perfect snugness for me--nice and wide to cover your whole neck, close enough so you can tuck in your chin against the wind, loose enough to slip over your head the second time around without messing up your hair.

And then this is what I had left over from the body of the sweater: 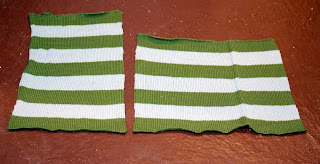 A friend of mine had just shown me a pair of armwarmers she had bought that were so cute, and I had been looking for just the right sweater to upcycle into a pair.  This one was perfect for it.  Well, what would have been REALLY ideal is a sweater with snug sleeves that I could just cut off and hem, but this was a close second.

To figure out how big I wanted to cut my armwarmers, I used a knee sock that fit my arm pretty well as a template.

So my cut pieces ended up being about 10 or 11 inches wide (I trimmed it after sewing it right where I wanted it):

By about 12" long (I ended up cutting a little more off the end because I was adding green cuffs).

I pinned the cuffs to the tops of the armwarmers and sewed them using a long stitch length, and I stretched the fabric as I sewed it to give it stretch for your hands to go through. 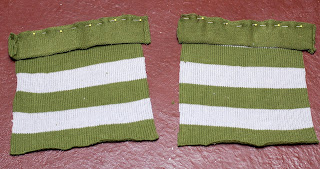 Then I folded them in half lengthwise (inside out, of course), pinned up the outside, and sewed at about the 4 inch mark at the top, and the 4.5 inch mark at the bottom.  I curved my seam in a little towards the wrist for a little snugger fit.  Actually, I slipped my arm inside before sewing to make sure the fit was okay.  It was. 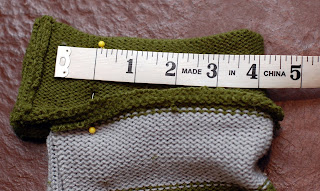 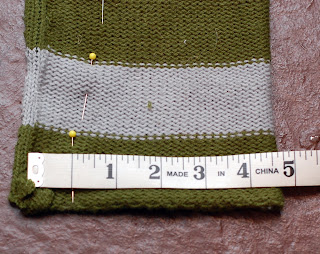 Then I added a second zig-zag seam for some extra stability, then trimmed it down. 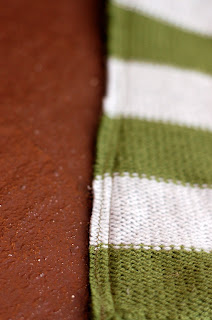 After turning inside out, you could be done... 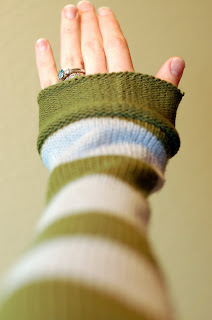 But to make sure your fingerless glove/armwarmer doesn't go slipping off (and for extra warmth), you can stitch a simple line about an inch in from one edge to give your thumb a home.  Again, place your pin, check the fit, then sew.

And tada, you're done! 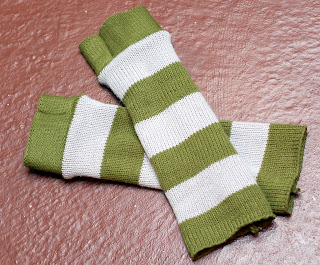 These are so great--I swear, I have wished I was wearing them several times since making them.  They were very tempting before I put them in the mail.

For example, we were at the chilly chilly beach this weekend, all bundled up for the windy and cold sunbreak walk on the beach.  If I'd had a pair of these, I wouldn't have had to whip off my gloves every time I wanted to take a picture on my touchscreen phone.  Gotta find me another sweater to chop up!

[Edited to add--I have since made tons more armwarmers, and I like this method (with a hole in the side seam for your thumb) much better!]

And I still have the hood left over, so I can make an upcycled version of this adorable girl's poncho someday (even though I famously announced in college that friends don't let friends wear ponchos--I had never had to wrangle my friend's arms into their sweaters, so I may be willing to change my mind about that now that we're talking about a freakishly strong toddler.)

Posted by bethanycavanaugh@gmail.com at 12:03 PM