I am so thrilled that my kids are at an age where they can start to play together. Those awesome moments of laughter and snippets of peace that comes from them entertaining each other are so priceless (not least of all because they will shortly break down into screaming and owies, but still...focusing on the positive here!)

Whatever big brother is doing, little sister wants to do too.  If what Brother is doing is crash-landing as he runs around a corner too fast and ending up with an owie, then Sister will immediately splat herself to the ground and call out "Owie!"  too. 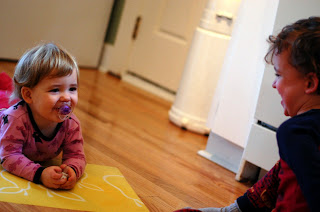 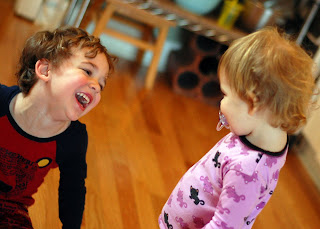 They are just so darn cute.  How is it possible that they just keep getting cuter?  Does it just continue this way until they hit their awkward stages?

I'm just so happy that they seem to enjoy each other's company.  Crossing my fingers that it continues into adulthood!

Speaking of enjoying each other's company, the kids and I (and even the hubby for a quick trip) were able to spend a long weekend at Cannon Beach with my parents and my brother and his gf.  It was my dad's birthday, but I won't tell you how old he is...

Of course, he couldn't resist impressing The Boy by pinching out the candles.


It's also pretty rare to have my brother at the beach with us, since his chef's schedule is not usually conducive to weekend trips.  So score!


And we were treated to some rare coastal inclement weather.


My parents' dog Maddie knew exactly the best way to handle the snow: 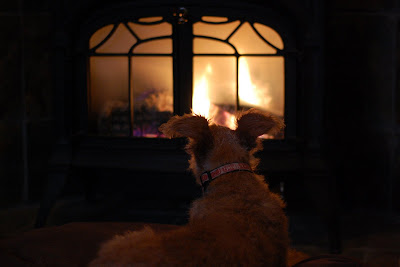 I don't have any pictures of the kids playing in the snow, because most of it was melted by breakfast time, but here's a look at the dusting we had before I went to bed: 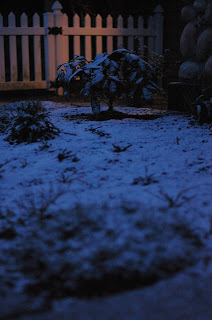 Despite how this looks, the weather actually was pretty intense over the pass, so we stayed an extra day to give it a chance to clear up.  The kids got to miss school (well, The Boy missed his 3 hours of preschool, and Little Sister missed her 30-minute Baby Boogie class at the community center) and have an extra day of chilling with the grandparents.


Since I had to make the trip into Seaside to buy some chains for my car (the pass got worse instead of better after our extra night, oops!), we took the kids for a carousel ride.

The Boy actually allowed Grandma to let go of him this time!


And this was Little Sister's first trip on the carousel.  I had a hard time getting a photo of us in motion: 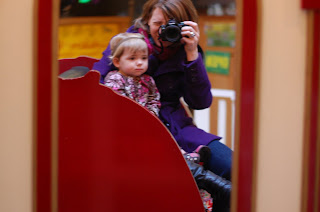 But once the ride stopped, you can see how clearly impressed she was.

When it was actually time to brave the roads, I was so glad to be with my mommy and daddy--Mom rode in the car with me to entertain the kids:

While Dad caravanned with us so that when the time came, he chained up my car for me. And then even though he had studded tires and he had to get back to town for a meeting, he stuck with me and my 25-mph driving over the entire pass to make sure we were okay, then he took them off again on the other side of the mountain.  And I sat in the warm car while Mom helped him.  How spoiled am I?

I was a little afraid that we would have missed the whole 2012 PDX snowfall event, but this happened after the kids went to bed: 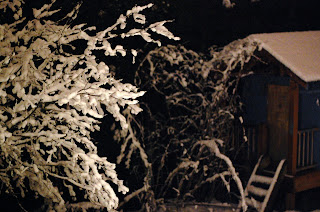 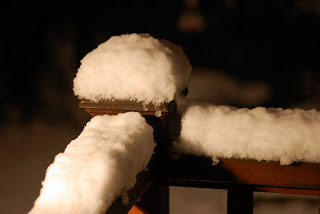 So now we've had snow this year.

Posted by bethanycavanaugh@gmail.com at 3:53 PM

Email ThisBlogThis!Share to TwitterShare to FacebookShare to Pinterest
Labels: family