Filler! But with Crafts!

I have a post that I am so excited to show you, but it's a gift that I am getting ready to stick in the mail, so I can't tell the internets all about it until it's been shipped off (and then received), so in the meantime I thought I'd check through my files and see if I missed anything. Turns out, I did. So here's a smattering of little projects I forgot to tell you about!

I'm usually pretty snobby about having licensed characters or logos printed on my kids' clothes. I just don't like to PAY someone for clothes that advertise a product, you know what I mean? But, my boy loves him some Disney Cars (what little guy doesn't?) Up until recently, he was only allowed to have Cars printed on his pj's and undies (I figure it's not advertising if nobody sees it but us, right?) But then I relented, and made him a shirt with this applique:


He loves it, I don't feel like I'm part of the Disney commercial machine, I still pay for character-printed undies, everybody wins.

In other applique news, the boy didn't have any Christmas PJs (I guess I was slacking on my after-Christmas pj shopping last year), so I did this simple applique on a pair of stripey ones.  We were both pleased with the results.


Next I found this:


Oh man, this was a good one.  We made paper dolls using the kids' faces, then I couldn't find any photos of Mom and Dad so rather than wait for me to have some printed at the grocery store, the boy decided to draw us some heads.  LOVE. IT.  Especially how the kid dolls are high-fiving each other.  And in case it isn't obvious, Dad is wearing a HAT.  He doesn't have rainbow hair.  Duh.

It was also a big month for birthday crowns.  I had three custom orders for them this month (not including the one that I will be making for my own birthday boy soon ahem), including this one:

Finally, I sent this pair of slippers made from a felted thrift store sweater off for little Emmy's first birthday over a month ago. 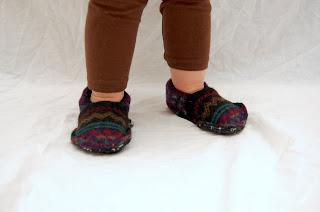 I followed this tutorial from Prudent Baby, but I had to do a lot of fanagling (spellcheck doesn't seem to think that is a word, but I'm going with it) to get this super-thick fabric to work.  I actually lined them with a thin microfleece rather than using two layers of the thick sweater fabric, so that helped, but it was still tough to do the elastic back (when the thick fabric gathers up, it makes the opening either weirdly tight or weirdly loose).  This is probably why I didn't post on this in the first place.  I think the tutorial would be great for a lighter weight fabric (like the recycled denim she uses in the tutorial).

So, that ought to tide you over until my giftie gets unwrapped so I can tell you all about it!  In other news, I am working on another MAJOR birthday present this week and am getting nervous that it won't be done in time for this weekend's birthday party.  Would a three-year-old accept a rain check?

Posted by bethanycavanaugh@gmail.com at 8:00 AM