This dress is another one from a pattern I got in my giant Goodwill haul of early '13. 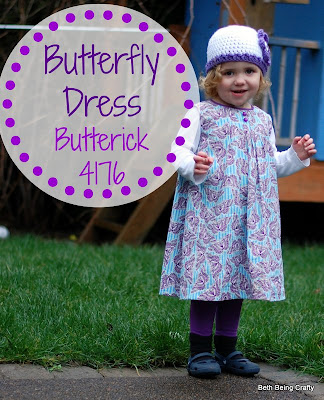 The pattern is this one:


I let Little Sister choose from the stack of patterns again, and this is the one she went for this time.

I learned from my experience last time, and made a size 2 bodice (a little roomy for my almost-three-year-old but fine), but since Little Sister has been obsessed with dresses that are "long long" lately, I cut out the size 5 length.  She would be happier if it was dusting the floor, but this is about as long as I'm willing to go so that she can actually wear it around without tripping on it and dragging it through the mud.

The fabric is one I got in the clearance section at JoAnn's--not a remnant, which is actually a good thing because I needed every inch of the yard I had, but that means I paid $4/yard for it, well over my typical price.  I just had to have this purple butterfly fabric though.


I love the simple pleats in the front of this dress, and the sweet little buttons.  The button closure in the back means she can't get it on and off by herself, which is kind of a bummer but not that big of a deal. It was really an easy dress to make.

I did fold my single-fold bias tape up a little as I sewed it around the neckline so that the purple edge would show like a trim.  It's the same technique I used when I made this shirt.  I think it almost looks like a piped edge.


I still haven't been able to get any pictures of The Boy in his lined pants that I made from one of the patterns, despite the fact that he's worn them about 3 times in the week since I gave them to him.  The first time, we were on our way somewhere and couldn't stop for photos, the second time I was planning to take pics as soon as I got him home from school, but then whoops!  He slipped in the mud on the way to the car and had to change as soon as we got home!  The third time he just wasn't in the mood.  Someday.
Posted by bethanycavanaugh@gmail.com at 3:09 PM