I just made a major discovery.  Goodwill has sewing patterns!  I don't know why this seems like such news to me--but I was surprised by my MAJOR HAUL the other day nonetheless.

I spent $5 (the women's pattern was $1, and the kids patterns came in a bundle of 5 patterns for $2 each).  When I added up the total pattern cost from the packaging, it came to almost $130!  This is why I don't buy patterns--there are so many great free things on the internet that I usually just can't justify spending $10-$15 for a cute pattern, when I would rarely spend that much on an actual dress.


Knowing that I would MAYBE make the same pattern 2-3 times, plus the cost of fabric, makes it less than worth my dollar to make something myself.   But WOW, I don't know why I hadn't discovered the Goodwill treasure trove before.  I guess that's not entirely true; I have looked through piles of patterns at thrift stores before, but haven't found things I wanted to buy.  Maybe I was just very lucky today.

I was a little worried when I was ready to open up the packages though--I didn't think about it when I was buying them, but...what if the patterns had been cut out in the wrong size?  Or were missing pieces or directions?  Or were torn/damaged/etc?  But (so far anyway--three patterns in) I needn't have worried--as a matter of fact, one of the packages I've opened was still brand-new, appearing to never even have been unfolded, and the others were even BETTER than new because one was already perfectly cut out (to the largest size, so I could just fold/trace the smaller sizes), saving me the work, and the other had the complete patterns cut out in the largest size and ALSO a fully traced smaller size pattern cut out of tracing paper.  Score!

This McCalls pattern was the first one I made.  I let Little Sister look at all of the patterns I bought and choose which dress I would make for her first, and this was her choice. 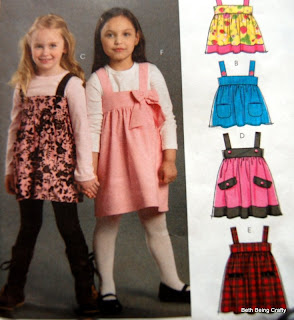 Little Sister wanted her dress to be solid pink, like on the package, but without the bow.  And she requested NO POCKETS!  What is wrong with that child?   Sometimes I wonder if she's even mine.  Anyway, I didn't have enough solid pink in my stash to make the whole dress, so I talked her into pink at the top and a pink band at the bottom with this railroad stripe that I love for the skirt.  It helped that I have a skirt that I made for myself out of that fabric, and she loves that we can be twins now. 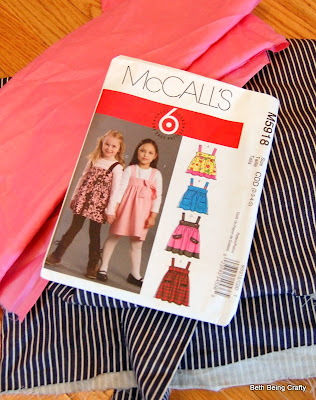 I like the end result, but I'm not totally sure about the fit--because there are no closures, the band at the top has to be pretty wide in order to get onto her body.


I cut out a size 2 yoke, since I know I've read somewhere that published patterns tend to run big, but Little Sister has been really into long skirts lately so I cut a size 3 for skirt length.

I feel like I could have gone even longer--this jumper came out shorter and wider than I expected based on the photos on the front.  It's definitely intended to be a jumper (worn over a shirt) and not a dress, although I may have a hard time convincing my tank-top loving girl of that come summer time.  I may need to shorten the straps if she won't wear a top underneath. 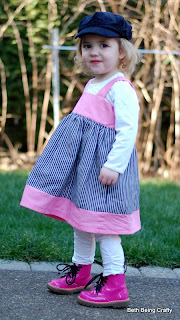 I have very limited experience sewing from published patterns.  As I mentioned before, I tend to go with what's available on the internet for free, or else just making things up.  After sewing up a couple of things out of my pattern haul, I will say that there is some benefit to using the packaged patterns (mostly the pattern pieces being right there instead of having to make your own or hope your printer is set up properly to print patterns, etc) but I expected so much more from the directions!  I figured, you know, these have been selected to be published by a major pattern-maker like Butterick or Simplicity, so they must be crystal-clear and easy to follow!  But MAN, I have a whole new respect for all of the bloggers who are creating content--patterns and tutorials--for average joe sewers like me.  I swear, I sat there for 15 minutes trying to discern one of the steps for the jumper I made for Little Sister, and I eventually had to just toss the page aside and use basic logic and my limited knowledge of garment construction to figure out how to attach the gathered skirt to the lined yoke.  The line-drawing illustration was no help whatsoever, and may have actually confused me more.  In the end, my skirt was attached, as you can see, but I'm pretty sure it was not done in the way the pattern intended.  I have scratched my head occasionally when following patterns and tutorials I have found online, but every time I figure out what was intended eventually (sometimes by reading the comments and the poster's subsequent clearing up of questions--another beauty part of the online community).

I'm hoping that, like with crossword puzzles and knitting patterns, there is just a sewing pattern language that I haven't gotten familiar with yet.  As I work my way through some of these patterns maybe it will come easier to me.

Coming soon from the set--boys' pants (finished, just waiting for my model to be ready for a photo session), and a sleeveless dress (I still need to bind the armholes and find some cute decorative buttons).  I am totally motivated!