The Boy had been complaining for a while that Little Sister has many more dress-up options than he does.  It's true, dress-up does seem to be a girls' world in a lot of ways, but her dress-up trunk does mostly consist of many different colors of tutus handed down from friends who were happy to pare down their own tutu collection.  It does make for a full trunk, but it's not like she has lots of different imaginary characters she can be.  That's why I supplemented with the mermaid costume for Christmas, which to be honest is what really set The Boy off.

I knew I wanted to make him some kind of costume for his birthday, which is in January.  He has really gotten into a kids' book series called The A to Z Mysteries by Ron Roy, and he is often collecting clues around the neigborhood or looking at a problem as a mystery that needs solving.  So I thought he would enjoy a Sleuth costume, and boy has he loved it! 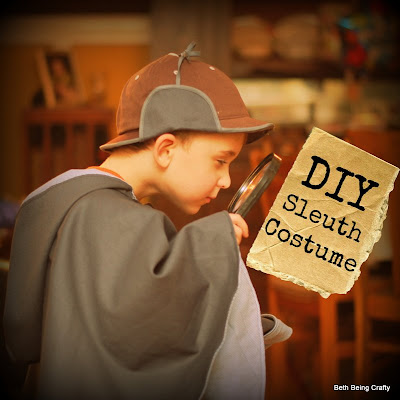 I found the cape pattern from Me Sew Crazy, and instead of making it from fleece, I made mine more like a sleeveless version of her rain poncho that she links to in the tutorial (outer fabric and a lining).  With interior pockets added to the lining, for the sleuth to stash his magnifying glass, clue notebook, and secret decoder pen.  I also gave the cape a velcro closure instead of a ribbon, so that I don't have to help him get dressed for detective work.

I then made the hat from this Martha Stewart tutorial.  I was so excited to find plain baseball caps at the dollar store.  Between that and the $1.50/yard grey twill I found for the cape (and the hand-me-down fabric I used for the lining from the hubby's grandma's stash of fabrics), this was a pretty darn affordable project! Actually, even the bias tape I used came from Grandma Dorothy, so my total cost (before accessories) was $5.00--$2 in hats, and $3 for the 2 yards of fabric I used.  Maybe one and a half--I didn't actually measure.  For the record, I opted not to make the Martha Stewart cape that went with the hat because I didn't feel like printing out the 27 pieces of computer paper and hoping against hope that I would get them all taped together correctly.  Me Sew Crazy's tutorial was much simpler, but I think that maybe it would have been good do to a collar instead of the hood. 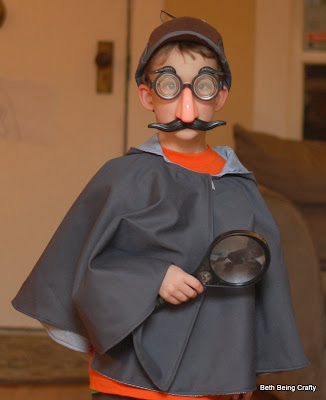 This "disguise" mask from the Dollar Tree has been a hit. 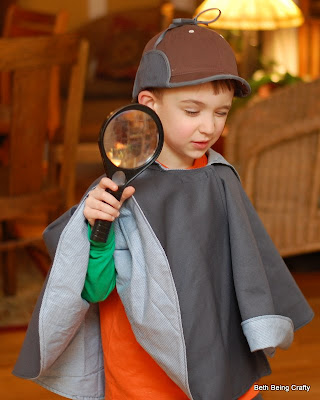 I got this magnifying glass on Amazon for $5.  Mixed reviews, but I figured it would serve our purpose. 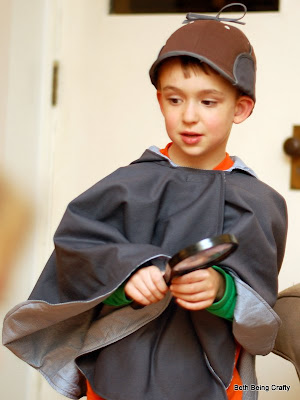 And I found a decoder pen and pad set at the Dollar Tree, and also a fingerprinting kit that we have yet to break out.  Lucked out with the Dollar Tree finds, I must say.  Total gift cost:  $13.

Oh, and I almost forgot--I found this Clue Jr game at Goodwill, and it was the half-price color of the week, so I nabbed it for $1.50 (are you kidding me with this $178 on Amazon?  What the heck!)  It's definitely not in mint condition, but we don't mind!  This was Little Sister's gift to The Boy as part of the theme.

--I have to make a note--we did not do any sort of photo session for this post; all of these photos just came from The Boy putting on his costume and playing Sherlock Holmes immediately after opening the gift.  Yay!
Posted by bethanycavanaugh@gmail.com at 3:34 PM