I grew up with a mom who LOVES a blind taste test.  Over the course of my childhood, we compared Coke and Pepsi, sweet potatoes and yams--even at our last Thanksgiving, we were treated to three different limoncellos my parents had brought home from Italy.  I hosted my own blind mac'n'cheese comparison in college, the results of which would probably serve me well now as a mom to two small kids if only I could remember them.  So when my parents started holding blind wine tastings, it was no big surprise.  They are really fun--I even did one for my birthday party this year.  My dad, from whom I get a lot of my bargain hunter instinct, has a motto when it comes to choosing wines--he wants a twenty dollar bottle that tastes like it cost thirty but you can get on sale for ten.  The blind wine tasting is a great way to put his skills to the test.

When a friend lent me her blind wine tasting bags (fabric wine bags that hide the contents but are short enough to avoid pouring difficulty, with embroidered numbers to tell the bags apart) for my birthday party, I knew I was looking at something that I could make as a Christmas gift for my dad. 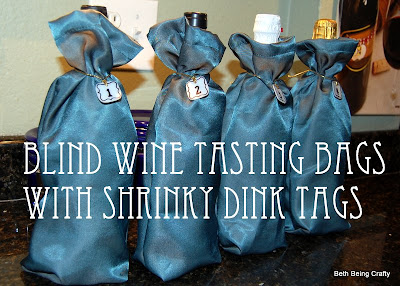 I wanted the numbers on the bags to be more permanent than a paper tag, but my embroidery skills are kind of sad, and I wanted these to be more elegant than "rustic" (the look I pretend I'm going for with my embroidery so it looks like precision was never the goal to begin with).  And then it came to me!  What's classier than Shrinky Dinks?  Nothing, that's what!  I would make the number tags from Shrinky Dinks.

I used this stuff last year to make these coffee decanter tags for my mom, so when I pulled out the packaging this time around and the instructions said to preheat your oven to 300 -350 degrees, I opened up my old blog post to see what temp worked for me last time.  I mean, isn't that one of the main purposes of my writing this blog?  To keep myself informed of tricks and tips I learned and forgot?  Or to avoid the same mistakes I made before when I do something again?  Because memory is not a strong suit of mine.  In any case, I failed to mention the oven temperature in that other blog post.  Details, details.

This time, I started out by printing out the shapes from this free printable I found, and printed the numbers using the Eccentric font in size 85, but as I traced the numbers, I found myself wanting to freehand it.  Well, really just extending and emboldening the printed numbers.  After all, one of my favorite parts of my post-college job at Starbucks was writing the coffees of the day on the specials chalkboard--I have some font skills! 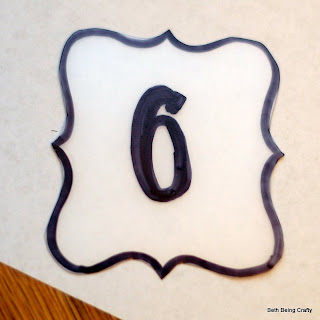 A tip--once you bake the transparent plastic, it turns white and opaque.  So after I cut out my shapes along the black line, I went over the edges again with the black sharpie, because some of the lines that I cut were just outside of my black sharpie line, and that would have turned white after baking even though it wasn't too obvious beforehand.  Be careful though--this is an easy way to turn your perfectly-executed pen lines into an uneven clump if you're not steady.

When punching my holes, I thought to myself, "Hmmm.  Maybe I should have placed the numbers lower in my little shape, to leave more room for the hole."  Just something to consider.  I used a hole punch that is slightly larger than your standard 3-hole-punch-sized-hole, and once the tags shrunk, that hole was very tiny--I was so lucky that my cord fit!  So err on the side of punching a larger hole than you think you'll need--remember that it shrinks to about 20% of its original size.


This happened.  I checked them after about 2 minutes 30 seconds, and they were still curled up so I let them go for another 30 seconds before taking them out.   The instructions said between 2 and 3 minutes, and take them out after they've curled up then flattened themselves back out, but because you're supposed to put parchment on top of them to keep them from sticking to themselves as they curl up, you can not see a damn thing while they're cooking.

But they were too curled up to be pressed flat with a spatula as the directions suggested, and I can only believe that my airbake pan was to blame.

I couldn't find the little pan I used the last time I did this, so I moved on to the regulation-size cookie sheet.  I also upped the oven temp to 350, in case that had been the issue.  But the good news was that I was better off with hole placement this time.  And I also got lazy about the cutting and just rounded the edges around the design.  I think it looks just as good.


SO!  350, and mine took the full 3 minutes, and then I did press them flat with a metal spatula just to be safe.

I say to you, AVOID the airbake pans with this project. Save them for your delightfully light-bottomed cookie endeavors (they really are fantastic for that).  It's true, the pan wasn't the only variable, (I messed with the temperature too, what kind of scientist am I?  No kind at all, that's what kind.) but my impression is that the pan was the problem.

In any case, they finally came out well in the end.  Man, that was supposed to be the easy part!  But actually, sewing the bags was a snap.  I followed this tutorial for the measurements, and instead of ribbon I used a thin metallic elastic cord--that way, I could attach the tag and tie the elastic into a loop that slipped over the top of the bottle and bag, avoiding the need to tie the ribbon on each time.  I bought 2 yards of cord for the six wine bags I made, meaning I used 12 inches for each bag, which was perfect.  My only advice with the tutorial is to be careful not to sew your ribbon or cord into any of your seams when sewing the wine bag.  Amazingly, I avoided doing that, but I did constantly have to remind myself to hold them out of the way.

Attaching the tags is probably pretty self-explanatory, but since I took the time to photograph the process I'll share it with you briefly.


Step Two:  Oh man I didn't photograph this step after all.  This is the one where you tuck the loose ends of the cord back through the loop that you made so it stays on.

And the set was a hit!  I included this fun "Rate That Wine" notepad from knockknock papers, and I didn't include wine glass tags but that would make a great accompaniment for this gift!  Especially because by the time you're trying that sixth bottle of wine, it's harder to remember where you set your glass. 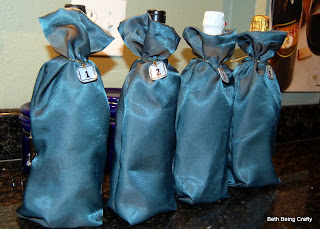 I just have to share--you'll notice that there are only four wine bags pictured here but I did in fact make six.  On the day I took these photos, there were only four sad little bottles in our house that I could use for posing the wine bags.  And, full disclosure, one of those bottles isn't even wine, it's sparkling cider.  How sad is that?  Only three bottles of wine in the house!  Don't worry, we were totally restocked before Christmas.


Posted by bethanycavanaugh@gmail.com at 5:16 PM