Project Run and Play May Challenge: The Summer Chevrons Shirt

I got a lot of input from Little Sister for this month's Project Run and Play challenge.  When I saw this month's inspiration pattern, the Summer Chevrons Shirt from Crafty Cupboard, I had a definite idea of what she would want.  So I showed her the pattern and asked her opinion, and she surprised me on almost every turn. 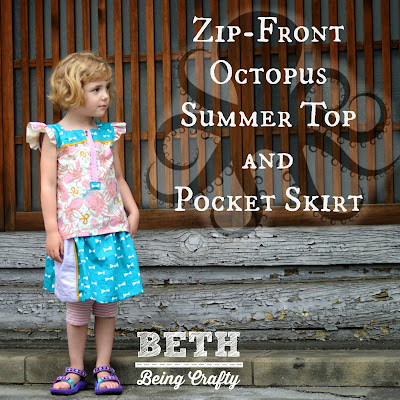 Except fabric choice--we were in total agreement on this awesome be-ribboned octopus print from Cosmo Textile Company Japan.


First of all, I wrongly assumed she would want me to turn the pattern into a dress.  Nope, just a shirt please!  Secondly, I thought she would want me to leave the sleeves off so it was a tank top.  Wrong again--she requested sleeves, please!  I did change them a little--I attached them backwards (gathering the curved edge instead of the straight edge), making them more of a flutter sleeve instead of a cap.  I mostly did it because I'm lazy--the print went right up to the selvedge on the fabric, so I could avoid hemming the sleeve by using the straight selvedge for the edge!

Finally, I thought she would like the elastic waistband in the original pattern, but she wanted me to leave it out.  I was worried that the top would look too boxy without the waistband, but I think she was right--it looks just as cute without it!

We were in agreement on the closure though. I had been saving this lace-edge zipper for a while, and she kept asking me to put it into different garments.  And finally I had one that worked!  She could easily wear this top with the zipper in the back too, but when it's in the front she can easily put the top on (and take it off) by herself, so that's a huge bonus for both of us.

I used this method from See Kate Sew to attach the embellished zipper to the top of the garment.  I left a gap front and center when I attached the yoke lining so that I could slip the top of the zipper in-between the two layers after attaching it, which worked out well--I closed it up when I topstitched all the way around the neckline.  I'm not sure how the raw edges on the back of the zipper are going to hold up though--I might tweak a little if I use this method for the zipper again.  I treated them with fray-check, and Little Sister says the zipper is a little itchy, so I might try adding a flap on the inside or something?  Or maybe the fray-check will soften up after washing.

**Update!**
After reading some commenter's suggestions, I covered the itchy raw edges behind the zipper with strips of the soft knit fabric I used for her shorts!  The top is saved! 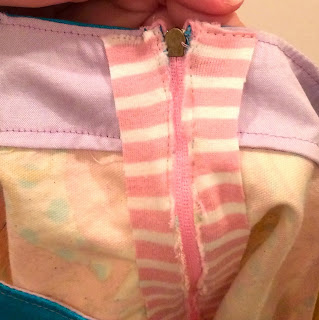 I made the skirt with the yoke fabric and mustard bias tape like the top, but added some lavender chambray for the pocket panels.  I was worried that it would be tooooo matchy, and that without the waistband in the top the gathered skirt would be too bulky with the top.  But actually, I think it works just fine together! 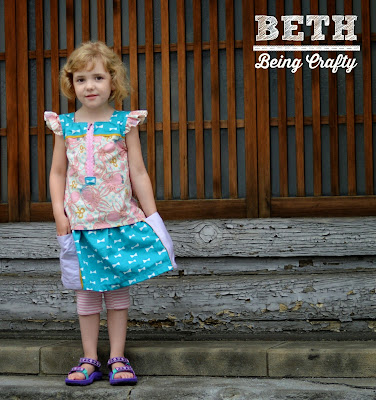 But it also is a great piece to mix with other tops, and she loves the big pockets. 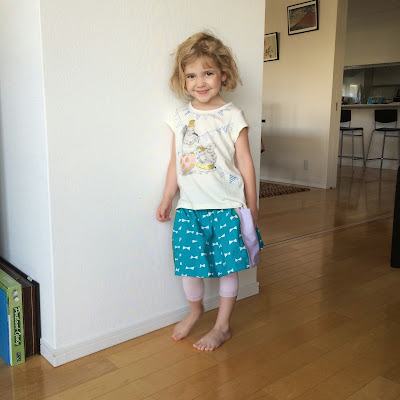 Just in case the top and skirt didn't work together though, I made a quick pair of knit shorts from some soft pink stripe I got for 100 yen a meter (about 82 cents!).  I shortened the Lazy Days Lounge Pants pattern and made the cuffs a little bigger since they'd go around her knees instead of ankles, but simplified it as well--no pockets and just a simple elastic waist. 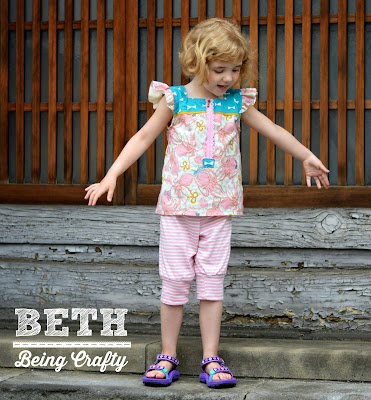 They're kind of funny, but I based them on a pair of shorts she loves that I made by shortening a pair of hand-me-down leggings that were too big but with a hole in the knee.  And they are a hit! 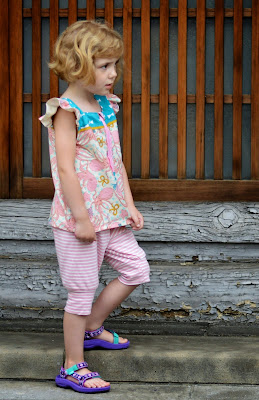 So there you go!  My (well, our) submission for May's Project Run and Play!  I'll let you know if I make the top ten this time (fingers crossed!)

Posted by bethanycavanaugh@gmail.com at 11:35 PM