So, you've probably noticed that I don't make as much stuff for The Boy as I do for Little Sister, and one of the reasons for that is that he has drawers full of clothes that fit him, and he just grabs whatever is on top.  It just doesn't make that much of a difference to him, it would seem.  One t-shirt does the job as well as any other.  And he's been living in too-big freebie or gifted tees for so long that most of them still fit just fine, even if he's had them for a year or two.  Little Sister won't wear t-shirts and pants or jeans, and it's so expensive to buy the kind of dresses that I like, and she's really opinionated about what she wears, so it's cost-effective for me to make stuff for her.  And I won't lie, it's definitely more fun (and easier, most of the time) to make dresses than to make standard-issue boy clothes.

BUT.  When The Boy gets a new shirt from me and chooses it from the drawer repeatedly because "it has a mother's love"...well, maybe it's time to send some of those library summer reading program shirts to the Goodwill (or the upcycling pile) and start making room for some more handmade goodies. 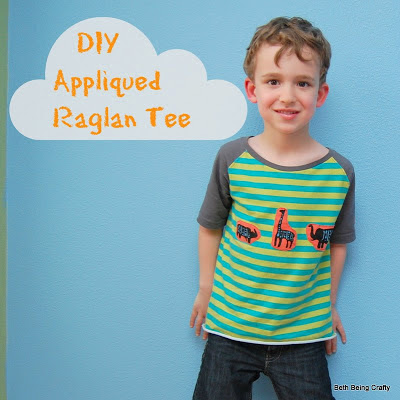 I made my pattern from a shirt The Boy already owns, and followed Craftiness is not Optional's Raglan Tee Tutorial.  I had made a few of these before and loved the tutorial and results. 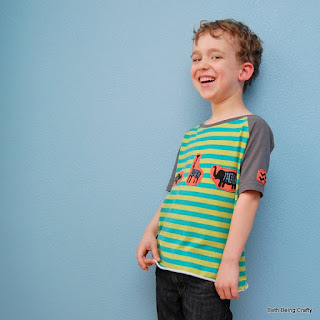 The Boy decided I should spice up the shirt by adding some animals from the scraps of fabric I had leftover from his pj's.  The kid's got a good eye!  The patch on the sleeve was my idea though.  I just cut the images I wanted out of the scrap knit fabric and sewed them on using a ball-point needle--pretty simple version of applique. 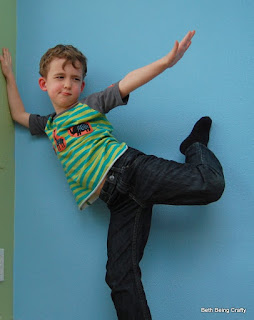 He has also started having fun with his "modeling" sessions.  He's getting used to the idea that if he wants me to make him clothes, he's going to have to let me take pictures of him wearing them!  The green and blue striped fabric came from Girl Charlee, and the gray sleeves and ribbed neckline were cut from an old t-shirt of the hubby's.  I only had a half-yard cut of the stripes, which was plenty for this size 5/6 tee since I was doing contrasting sleeves.  I also opted to do a rolled hem, since this fabric rolled really easily.


We were photobombed by "Princess Jasmine"--Little Sister in the "jingly dress" brought back from a trip to Puerto Rico by Grandma and Papa. 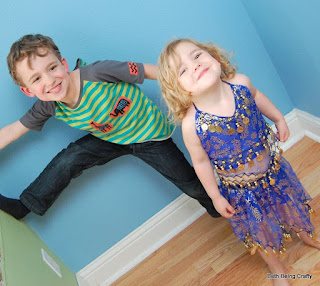 She doesn't love sharing the spotlight.

Posted by bethanycavanaugh@gmail.com at 3:17 PM