Another Scoop Top, Another Anthro Inspiration...

When I made my first Scoop Top from the great Skirt as Top free pattern, I already had a plan that if that one worked out, I had another version I would try. 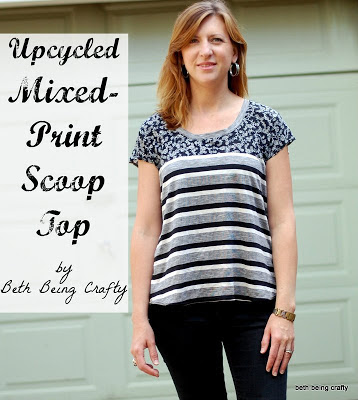 This shirt was based on this mixed-fabric top I saw on the Anthropologie website.


Mine, of course, has mixed prints, since I can't help myself.  But I went with neutrals, since the shirt was a birthday present for a friend of mine and I didn't want to go TOO crazy. 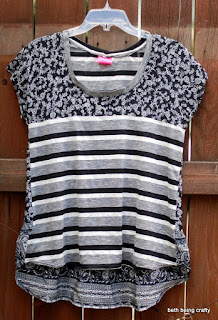 And just for fun (no, actually, it's because I was combining an upcycled sundress with a mere 1/2 yard of knit from Girl Charlee so I had to get creative with my cuts), the back switches the prints so the stripes are up top and the floral is at the bottom.  I really like the curved line joining the two fabrics in the back. 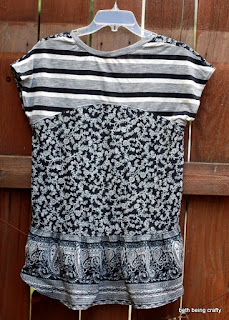 The floral part of the shirt came from an old dress of mine that had a wide ruffled hem (the paisley-ish part of the back of the shirt). I left the ruffle on for added interest--I thought it looked cool to bring in the variation on the print, but also I liked the dropped hem.  Also, um, I wouldn't have had enough fabric otherwise.  But I wouldn't have done it that way if I didn't think it looked good!  My husband thought it was kind of weird, but what does he know?

It didn't come out perfect on the first try--I had some issues with getting the ruffle to lay right.

I know that just what every girl wants is a ruffle extending out from her natural butt to make it look wider, but I thought I'd better take it in just to be safe.

It is so dang hard to get a photo session done period, there was no way I was doing another one once I fixed the tail issue--so my mom cropped out the tail for me in that initial photo.  That really is what it looks like now.  But these back and side photos were also taken pre-tail-removal, so the shirt lays better now than how it looks in these photos.  It's a little tricky working with a ruffled portion in the back--I had to do some angled tucks to get it to lay right, but I think it's worth it for the added detail.  And I curved the edges up to meet the front portion of the shirt (the same basic shape as the Scoop Top pattern), so I did have to hem the bottom edge of the shirt even though it was an upcycle.

I really really love the end result on this one. So, Jess, if it turns out you just don't like this shirt enough to wear it, let me know--I'll take it back and make you something else!
Posted by bethanycavanaugh@gmail.com at 3:57 PM