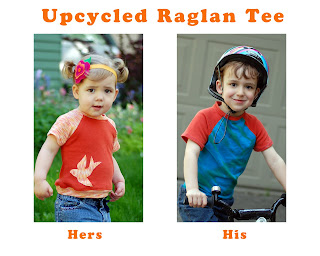 Craftiness Is Not Optional has such a great tutorial for making raglan tees.  They come out so cute, that I made three of them!  And I will probably make more!  But I changed it up a bit by using old adult tees and tanks instead of buying knit fabric, so I've got a few tips for you on how to do that successfully.  I also have tips on how to do that unsuccessfully, or as I prefer to say it, pitfalls to avoid.
I started with a women's long sleeved tee and a coordinating ribbed tank top. 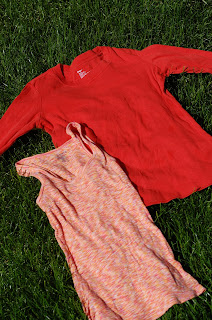 I decided it would be neat to use the bound edging at the top of the tank to form the hem for the sleeves, so that's where I cut them out.  There was just enough fabric there.  I folded the tank in half as shown below, so that I could cut the sleeves on the folds--one from the front of the tank, the other from the back. 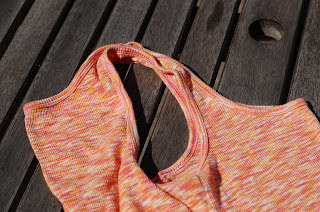 I then cut a strip of ribbing from the middle of the tank top.  My strip was 19 inches long, and it had seams in it from the tank top's sides.  When I sewed it on, I lined up one of the strip's seams with one of the back shoulder seams on the shirt, and it was plenty long to avoid the second side-seam--I think I ended up using 13-14 inches for the neckline.  Below are all of the pieces I cut for the shirt. 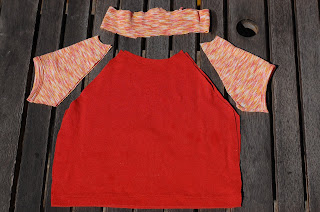 Oh, I was planning to use the shirt's original hem for the bottom of the raglan shirt, even though I thought the band in the tutorial is adorable.  Well, I ended up needing the band after all--I'll tell you all about it in my special "what not to do" section.  In any case, once these pieces are cut, you're ready to follow Jess's tutorial and sew them all together!  Really, the only adaptations I made in order to upcycle were in how I cut the fabric.  Also, you can skip the hemming steps for both sleeves and bottom of the shirt (if you're using the original hem, instead of the band).  If you are planning to add the band at the bottom, I would actually avoid the bulk of the original hem, either by cutting it off or just cutting your body pieces out of a different part of the shirt.

Oh, one other cutting note--for both the boy's shirt I made, and for the blue and green embroidered shirt, I was able to cut the ribbed neckline off of the original shirt and use that for my neckline.  The bonus for doing that is that then there's no seam in it, AND it's already ironed in half!  Yay for skipping steps.

HOWEVER, there are multiple ways you can screw this simple shirt up, trust me.  Particularly if you are trying to make it during naptime on a day in which neither child is napping, hence giving the seamstress an undue stress level.  Unfortunately for me, none of the errors I made can in any way be blamed on the tutorial--just on my own boneheadedness.

Here's the rundown:  All was going well, until I went to hem up the sides and realized I had attached the front panel of the shirt backwards (the fabric is the same front and back, but since I was upcycling it was already hemmed, the wrong way.)  Taking apart to reattach not really an option because I decided to add extra topstitching to the neckline since my ribbed fabric was so thin it would flip under otherwise. Finished it anyway by adding a band to the hem to cover up the reversed hem (an option in the tutorial that I had planned to forgo since I was reusing the existing hem) to discover that it was practically an off-the-shoulder look due to the fact that I had cut the neckline in front lower than the neckline in back (on purpose), then noticed the subtle grease spots on the front panel (hazards of upcycling) so cut the neckline in back too so it could be the front instead.


After trying to figure out a way to narrow the neckline, I gave up (too much seam ripping on the raglan sleeves/topstitching for the thin knits to handle) and figured out that I still had enough fabric left to cut a new shirt, which I did--this time free of grease spots and with the right size neckline.  It says a lot for this tutorial from Craftiness Is Not Optional, that even after all of my stupid errors, I knew how cute this shirt would turn out and how simple it should have been to execute, that I attempted the project again, right then and there, rather than throwing in the towel.

On the second shirt, I proceeded to:

1.  Sew the back panel to the sleeve backwards, having to rip the seam out and sew it on again the right direction.

2.  Got the back panel on in the right direction, but OOPS, I sewed the sleeve to the neckline instead of the sleeve line.  Rip. Out.

3.  Attached the band to the inside of the shirt instead of the outside.  I did not!  Oh yes I did.  Rip out, try again.

Lesson:  Do Not Attempt Sewing while ostensibly caring for young children.  Even if you really, really think you are ignoring them and leaving them to their own devices, they are totally distracting you.

While I was repinning the band to sew it on the correct side of the shirt, Liam said to me, "Mom, maybe you should finish that later and come play with us."  What can I say, my four-year-old little man?  When you're right, you're right.  Bubbles in the sunshine with the kids was much more satisfying.  I finished it after the kids went to bed.

Once it was done though, I decided to Crafty Beth it up with a little bird applique.  This is Portland, after all--and I can proudly say I have been putting birds on things since before Portlandia aired, so I was truly part of the movement.  However, when the hubs saw it, he thought it was a goldfish, and when Little Sister saw it, she thought it was a butterfly--both of which probably would have been better options for an orange shirt, but I was ready to just get this thing done with. 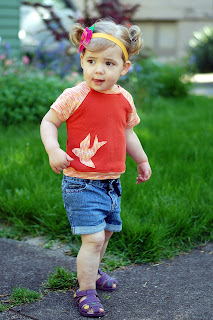 So that I could make another one.  But would you believe, that even after all of that, I started out by sewing the sleeves on to the big boy's version backwards?  I think that by that point I had some sort of mental block against this shirt.  Also, I made the neckline a little tight on this one and it pulled out a little when he took it off.  So, here's a tip:  I liked the look of the topstitching around the neckline, but it made it so there wasn't enough stretch.  So I topstitched the front and back sections only, and attached the neckline to the sleeves using a zig-zag stitch and no topstitching.  That way there's just enough stretch to easily go over his head, but I still get the look of the topstitching from the front and back panels. 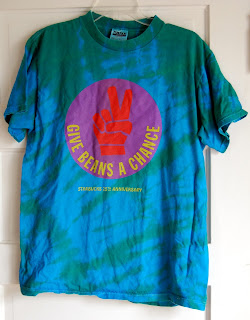 This was one of my employee shirts when I worked at Starbucks. I found it in my closet at my parents' house, leftover from college. Luckily it didn't have side seams for some reason, so I was able to cut two size 5T pieces out of it and manage to avoid that "Give Beans A Chance" logo.  It helped that it was size enormous.


This last one is the only one that I did perfectly on the first try.  And would you believe it?  So quick and easy!  Just as it should be!  As a matter of fact, the turquoise shirt I used here had little raglan cap sleeves, so I was able to pretty much just cut them off, size them down, and use them as-is for my version.
So if you like raglan tees, I think you should totally make some!  Out of old shirts!  When your kids are nowhere near you!

Posted by bethanycavanaugh@gmail.com at 6:53 PM