What are you going to be this year?

Halloween is coming up!  And since I'm nowhere near organized enough to show you our costumes for this year, I thought I'd post the costumes we wore last year.  We have been so lucky with gifted and handed down costumes that I haven't had to make much, but I did do some creating and some embellishing to make our costumes last year.

Someday, we will have a whole family theme.  Well, I really really hope so.  But these kids and their opinions!  This year, Little Sister is still pliable enough to be talked in to The Boy's old monkey costume, so we're all set there.  We are getting our money's worth on this thing!  The Boy wore it when he was almost two AND almost three, so this is the third Halloween we're getting out of it.


But, my plan to dress The Boy as the man in the yellow hat was foiled.  Apparently The Boy does not like Curious George any more.  So, Little Sister will be a ballerina monkey (adding a tutu and tiara to the monkey costume), and The Boy wants to be a triceratops.  If I finish his costume in time, I will post it here (planning to make it out of a hooded sweatshirt and sweatpants).  Not sure what the hubs and I will do--any ideas on how to team up with those kid costumes?

Last year, my parents went to Sweden and brought The Boy this Viking dress up set: 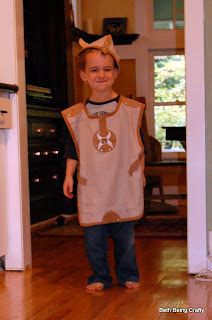 To build it up into a full-on Halloween costume, I bought some fake fur (I found remnants, so it was super cheap!) and a bag of leather scrap strips from Joann Fabrics and made wraps for his arms and boot covers. The arm wraps were just rectangles wide enough to go around his arm, then I wrapped some of the longer leather straps around to tie them in place.  The boot covers, I cut into a rectangle wide enough to wrap around his leg, and added a half-circle in the middle at one end, so it would cover the top of his shoe.  Then, same deal--I wrapped it around his leg and used a long leather strip to wind around it and hold it on.  The shield and sword came from the dollar tree, and I used some old stage makeup to give him a burly viking beard.  I was inspired by this adorable viking costume I saw on I Am Momma, Hear Me Roar, and I'm happy with how our version turned out. 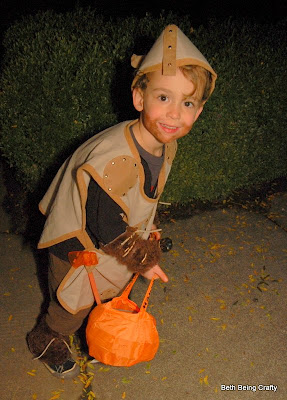 Since Dad didn't have a fancy vest from Sweden, I cut a square out of the fake fur for him and cut a slit for his head.  I added another slit toward one of the corners (so the opening looked like a capital T) and poked little holes so I could use a leather strip to lace it up.  And I cut the edges of the square to look a little jagged.  He got the arm and leg wraps too.  I had a hard time finding cheap adult viking hats, and ended up ordering that online, but I added braids from the dollar tree using hot glue and covering the loose ends inside the hat with felt. Add an XXL baggy t-shirt from dollar tree, a brown belt from goodwill, and some dollar tree weaponry:  Instant Viking.

Little Sister had a super cute little flower costume handed down last year.  No help from me needed--this getup was complete with tights and slippers, and I even found a flower trick-or-treat basket on clearance for about 42 cents!

So I decided that the logical costume for me would be a gardener.  I already had the red checked shirt, so I turned a pair of old mom jean shorts (seriously, why did I even have those?) into a "gardening apron" (totally last minute, so I never blogged it or took photos of the process), found a wide-brimmed straw hat at goodwill, and tucked some gardening gloves and seed packets into the apron pocket (after taking the picture, apparently).  You can't see it in the picture, but I was wearing my rain boots too. 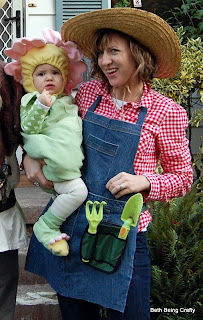 Anyway, I would love to hear about your Halloween ideas!  Next year, look out.  I'm going to start planting some serious seeds now so that I can make these kids think that Goldilocks and the three bears was their own idea for an awesome family costume.

Posted by bethanycavanaugh@gmail.com at 10:04 AM