Oh my gosh, I can hardly believe I am posting this a full FIVE DAYS before Halloween.  And I finished it TWO DAYS AGO!  I have never been so prepared in all my life.  Blogging has made me a much more responsible crafter.

The Boy's Halloween costume is DONE! 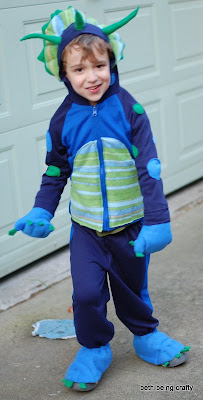 The Boy wanted to be a triceratops this year.  I bought a hooded sweatsuit for $9.99 and found some fleece remnants that coordinated, and planned to just wing it.  But as I was at the Walmart fabric counter (buying some of the CUTEST fabric on clearance for $1.50 a yard; I can hardly wait to make something out of it so I can show you), this pattern caught my eye:


So I used bits and pieces of it, instead of figuring out on my own how to make the frill, and the shoe covers, etc.

I obviously did not use the bodysuit that came with the pattern, but I used the pattern pieces to make the tail, frill, horns, gloves, and shoe covers.  I had to adapt the shoes a bit, as they are intended to be one piece with the legs of the bodysuit, but it just involved making a casing for elastic in the top rather than attaching them to the legs.  I should have sized up for the shoe covers though, because a. I used some of the fabric for the casing, resulting in a slightly smaller shoe, and b. The Boy has enormous feet.    These work, but his toes do peek out. 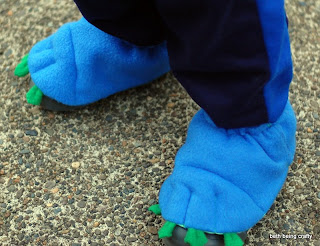 I also made the claws differently than the pattern described, because I tried it their way and it was STUPID. But man, it was so helpful to have the pattern!  The 97 cents was totally worth it to skip the headache of figuring all this stuff out. 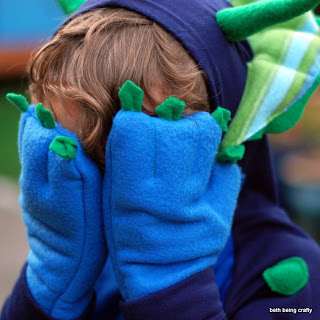 Since The Boy was trying out his costume, OBVIOUSLY Little Sister was going to have to put hers on as well.


Nope, I didn't make hers.  It's the same Old Navy monkey costume The Boy wore when he was two.  And when he was three.  I really doubt I can get her to wear it again next year....well, maybe! 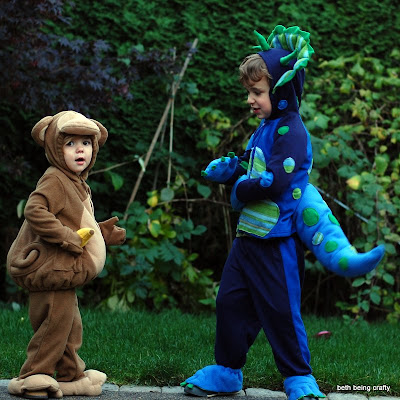 A couple of notes:

1.  When attaching the frill, I figured out where it should go on the hood, then pinched the hood fabric up around the raw edges of the frill, front and back,  and sewed the little channel using my machine.  The pattern said to hand sew....um, no.  BUT, as the sweatshirt I bought was aallllmost too small to begin with, this did shrink the hood down a bit, and I may add a strip at the back of the neck to extend the hood.  I did hand-sew the horns.  Sigh.

3. For attaching the tail, I cut a hole the same size as the circle at the base of the tail in the back of the sweatshirt.  Then I pulled the tail through the hole and sewed them together so that the raw edges would be hidden on the inside of the sweatshirt.  Worked great.

4.  I also made a "tummy" pocket out of the same fleece I used for the frill.  The sweatshirt I bought didn't have pockets, and since fleece doesn't fray I just freehanded a shape and left openings for hands (or a place to tuck those bulky gloves when he realizes they inhibit his candy-grabbing abilities.)

5.  I sewed each and every dot onto the costume.  The pattern says to glue them, but I wanted this to go in the dress-up box when Halloween was over, and half-glued, peeling dots are just not going to do it for me.  SO, if you want to sew your dots on, you will have a much easier time sewing dots to the tail BEFORE you sew it closed.  Lesson learned through experience.

6.  This was a fun project for The Boy, because he got to do a lot of the stuffing.  The tail, obviously, but also the frill, horns, gloves, and shoe covers all have some batting stuffed inside.  He was really a great helper with that.  He also enjoyed deciding where I should sew the dots.

7.  I left the pants totally alone.  Nary a fleece dot to be found.  That way, he can wear them as pants when Halloween is over.  Especially good because, although the top and bottoms were purchased as a set, the pants are HUGE on him while the sweatshirt, as noted above, is almost too small.
Posted by bethanycavanaugh@gmail.com at 3:09 PM