I framed another family photo in a frame I got on clearance at...hmmm, I think it was HomeGoods this time.  I got this nice big square frame with a double mat on clearance for $10 with a painting of a bathtub in it. 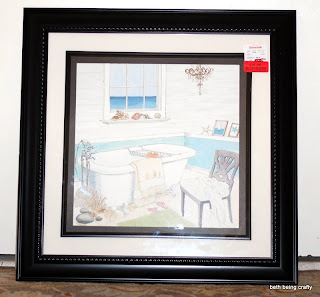 First I pried the back off: 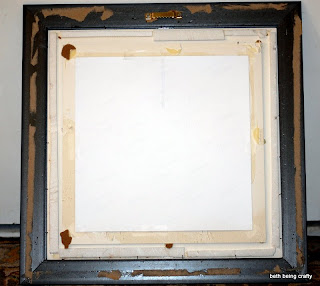 Then I peeled the bathtub picture out and followed the steps I outlined in my post about this process before HERE.

The heavy fiberboard that they have started using to back these things is really hard to get back into the frame.  So instead of replacing it, I cut a piece of cardboard to fit in the back instead.  Then I used the little metal brads that used to hold the fiberboard in (well, the ones that stayed stuck in the frame; several of them pulled out when I removed the backing) to fold over and hold the cardboard in.  This is totally how I'll do it from now on.  WAY easier than trying to wrangle that fiberboard back into place. 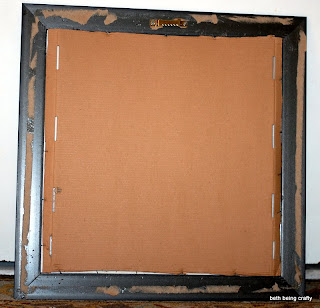 To really look professional, I should have removed the picture hanging hardware, covered the back with brown paper, and then replaced the hardware.  But since this is just hanging in my house where nobody will ever see the back of it, I just left it with a naked back.

And this is the finished product!  Sorry for the weird angle; it's hanging in a narrow hallway where it was tough to photograph it straight on. 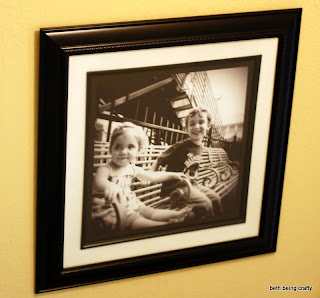 I took this photo while we waited in line to slide down the big pink slide at Oaks Park this summer.  For my photo editing, I just used Google's free Picasa software.  I cropped the image to a square, made it black and white, then applied the "Lomo-ish" setting (that's what it's actually called.  Lomo-ish.).  Printed at Costco.  Total project cost = $12.99.
Posted by bethanycavanaugh@gmail.com at 2:12 PM