I was going through a bag of my old stuff I have saved to make into stuff for the kids, and I found a pair of my old pants.  I tried them on, and they pretty much fit, except that they were almost highwaters.  I had been saving them to make pants for The Boy, since the wide legs had plenty of fabric for that, but then I started thinking...I can buy boys' pants for $5-$10 dollars, but what does a new pair of pants for me cost?  So sorry kiddo, I took back the pants and turned them into a more flattering pair for myself. 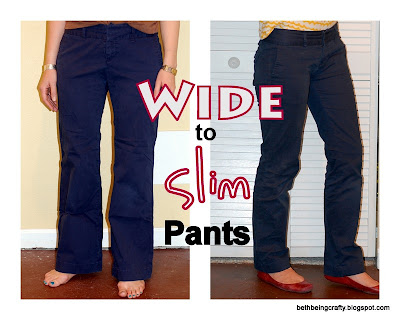 I started by turning the pants inside out and laying them out flat.  I found my other pants that had a fit closest to what I had in mind for these pants and lined them up on top so that the OUTSEAMS were lined up.


Then I started pinning.  I pinned all along the inseam so that my new pants would be roughly the same as my template pants.  I did notice that it was a little tricky to make sure that the center seam at the front and back of the pants stayed lined up, but I figured I could carefully tug it into place to make sure things stayed lined up as I sewed, as the fabric had a bit of stretch (more on that later).

I used my seam ripper to undo the hem at the inseam, so that when I was done I could put the hem back together and have it look all professional-like.  Then I slowly and carefully sewed along my line of pins (I suppose you COULD do this with a fabric pencil, if you are not lazy like me).  When I got to the crotch, I was so careful to make sure things lined up.  Stay tuned.

Anyway, once that was done, I turned them right side out and tried them on before trimming out all of the extra fabric, just in case.  Then when I DID trim out the extra fabric, I still left plenty of seam allowance just in case just in case.  When I tried them on again after doing that, I could see that there was a major pucker just below the fly.  Again, sorry googlers.  In any case, that is not what one wants.  So I used my seam ripper to take apart the crotch area (good LORD, I'm sorry for using that word so much!  It's starting to lose all meaning for me!), and what I discovered is that I needed to remove some of the fabric in front for it to line up correctly.  I was nervous that doing that would result in too low of a rise, but it was just fine.  I just needed to pinch the front of the pants just under the fly and sew a straight line from the raw edge of the fabric to the bottom of the fly to remove that little triangle of excess.


Once I trimmed off the extra fabric so that the crotch (ACK!) lined up properly, it was so much easier to sew, and there were no inappropriate puckers.

ALL RIGHT.  So if you're still with me, here's what to do:  After marking the line where you want to sew, CUT OFF the old inseam before sewing the new one.  Leave plenty of seam allowance if you're afraid, but this way you can monkey with the center seam area (oh, that's better!  I was having a hard time figuring out what to say instead of CROTCH again.) and make sure it will lay flat before you sew it down.

So once that's done, and you've tried them on and everything's peachy, fold your hem back down and stitch it in place.  And you're done!

I can't believe I'm doing this, but I know that if I were thinking about doing this myself, I would want to know what the back looked like.  So, dear reader, here is my sacrifice for you:  I am putting a picture of my butt on the internet.  I am slightly horrified right now.

I was so excited about this project because I love slim pants, but not "skinny" pants.  I don't want them to be skin-tight, but I like having something more fitted/streamlined on the bottom when I wear looser tops.  And these are lightweight and perfect for summer and spring with sandals and flats (I did mention that they were almost highwaters to begin with?  Well somehow that works better on a slim pant than a wide leg one.)  I made these just a smidge wider than my favorite fitted jeans, and I loved that I had that option to make the leg just exactly as wide as I wanted it.  Hooray for DIY! 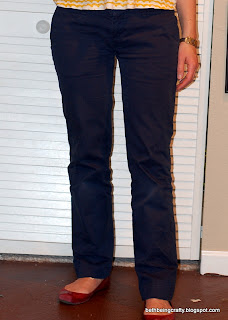 Posted by bethanycavanaugh@gmail.com at 5:51 PM