The Boy's been bugging me asking me for a summer tank top, and I thought it would probably be faster to just make him one than the time it would take to shop for one that I could stand to put him in.  So I pulled a t-shirt out of the pile of things I've gathered (planning to make a skirt out of it for Little Sister), and got to work.


I found this tutorial, which was really helpful.  I used scrap fabric from another t-shirt for my trim--maybe I wouldn't have had this problem if I was using ribbed knit, since it stretches so much more, but I did find that I needed much longer pieces of knit trim than the tutorial called for. If you're using t-shirt scraps like I did (or ribbed knit, for that matter), make sure you cut them so that they stretch in length, not width. Otherwise your kiddo won't be able to get their head through!

For a 5T, which is the pattern size I used, the tuturial called for armhole strips that were each 11.25 inches long and a neckline strip that was 13.25 inches.  I made my armholes 13.5 inches and the neckline was 17.  I could have gone a smidge smaller on the neckline (maybe an inch), especially if I were using a serger for added stretch, but I feel like the given lengths were much too short, so be careful!  Better to cut extra long then trim off the extra than end up without enough trim to go all the way around.

Otherwise, a great tutorial!  The Boy loves his tank.


Oh, I also always stick something resembling a tag in the backs of things I make for The Boy--he notoriously puts things on backwards and then argues with me about it, so I have to have proof!  For this, I just cut a scrap rectangle of contrasting knit fabric (so it would show up) that wouldn't fray and tucked it inside when I sewed the neckline down.  I wrote 5T on it with fabric paint. 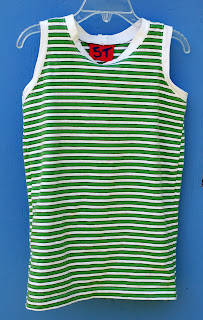 And the great thing about upcycling is that I didn't have to hem it--just made sure to cut it out so that I could re-use the original hem.  Yay for shortcuts!
Posted by bethanycavanaugh@gmail.com at 7:16 PM