Full disclosure--this is not going to be a tutorial, but there might be some helpful inspirations or ideas.

Also, this dress doesn't fit. But it will, someday! 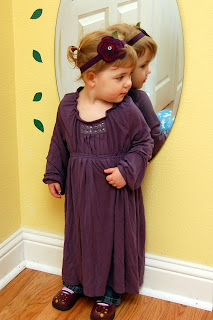 I had wanted to turn this purple shirt that I wore while I was pregnant into a dress for Little Sister for a while. 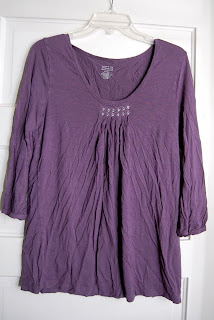 I was inspired by this sweet pink dress that used elastic thread for the gathering around the neckline and sleeves as well as for the shirred waist. 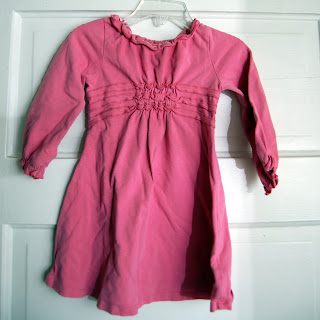 I folded this pink dress up with the purple shirt so I could use it as a template when I made the dress. Unfortunately, I didn't get around to it for quite awhile. Now Little Sister is growing out of the pink dress already (and I've had it tucked away instead of in her drawer where I would remember to dress her in it, doh!), so I wanted to make sure the purple one would be bigger. 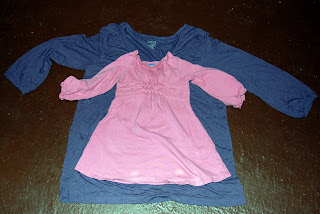 Also, I wanted to use the existing hemline on the purple shirt, so I knew we would be talking about a longer dress. But... 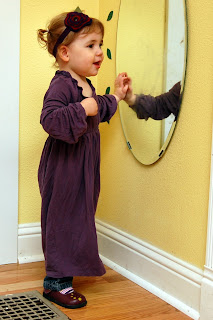 I might have gone a little overboard. Oh well, that's one more dress I won't have to make when she's four!

A note--since the neckline was pleated, I ironed the heck out of it and pinned it flat, then sewed a regular seam over the pleats to hold them in place. THEN I started my rows of shirring with the elastic thread. I only did three narrow rows. I also sewed a line of elastic thread around the neckline. First I sewed right on the folded-over edge, but guess what? It didn't ruffle! So I had to pick it all out (grrr--Keep Calm and Grab the Seam Ripper) and sew it again where there was only one layer of fabric. Worked out just fine! But because of this I chose not to use elastic thread for the sleeves; I just cut them down to size so that the band at the wrist was small then the fabric belled out on the arm.

Posted by bethanycavanaugh@gmail.com at 7:33 AM