I need advice.  I had a wonderful pear-gorgonzola scone at a great local coffee shop (The Warehouse Cafe).  Not only did I find it delish, the kids gobbled it up too, totally surprising me and wishing I had ordered more than one.  I decided to try it for myself.

I found this recipe for Cheddar-Apple Scones from Smitten Kitchen (looks pretty good itself--might have to try it someday!) but used pears and gorgonzola instead.

First, the good news:  in the end, they were pretty darn good. 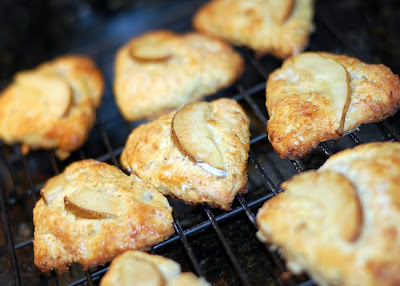 HOWEVER, after about 15 of the 30 minutes they should spend in the oven, I noticed a bunch of liquid pooling in the cookie sheet where the scones were baking.  Something told me that wasn't supposed to happen.

I'm a thinker though, so I averted disaster by pulling the pan out of the oven, holding on to the parchment where the scones were resting, and pouring the liquid off of the pan before putting the scones back in the oven to finish baking.  In the end, they were just right, so no harm done, but I think I'd probably better find a way to make this recipe without having to stop halfway through baking for drainage.

Here's the solution I've come up with so far:

I started by peeling and cubing two pears, putting them in a single layer on a piece of parchment on a cookie sheet, and baking them at 375 while I mixed up the other ingredients (15-20 minutes or so).  I think that I could have let them bake a little longer, and probably should have used pears that were firmer--I have a pear-cranberry pie that I love to make, and it turns out the best when I use pears that are virtually rock-hard, so that might be the road to take here, too.  OOH, just realized when I posted the picture that the pear slivers I placed on top for prettiness had not been pre-baked--that probably didn't help either.

So, the liquid in the pears might have been some of the problem, but there was quite a bit of liquid there, and  I have a feeling that there was another culprit.  Gorgonzola is a softer cheese than cheddar--do you think some of my liquid could have come from there?  The recipe calls for 1/4 cup heavy cream, maybe if I cut that amount down next time to compensate for the cheese?  Or would it be better to cut some of the 6 tablespoons of butter?

For reference, here's the complete recipe (again, found at Smitten Kitchen--I just used pears and gorgonzola in place of the apples and cheddar.  Oh, I also cut my dough into 8 portions instead of 6.  I would love any suggestions!

Apple and Cheddar Scones
Barely tweaked from The Perfect Finish

Position a rack at the center of oven and preheat oven to 375 °F. Line baking sheet with parchment paper.

Peel and core apples, then cut them into one-sixteenths. (I assumed this meant chunks, not slivers.) Placed them in a single layer on a baking sheet lined with parchment paper and bake them until they take on a little color and feel dry to the touch, about 20 minutes. They will be about half-baked. Let them cool completely. (You can speed this up in the fridge, as I did.) Leave oven on.

Sift or whisk flour, sugar, baking powder and salt together. Set aside. Place butter in the bowl of an electric mixer with a paddle attachment, along with cooled apple chunks, cheese, cream and one egg. Sprinkle flour mixture over the top and mix on low speed until the dough just comes together. Do not overmix.

Generously flour your counter top and place the scone dough on top of it. Sprinkle with flour. Use a rolling pin to gently roll (or use your hands to pat) the dough into a 1 1/4-inch thick, 6-inch circle. Cut circle into 6 wedges. Transfer them to a baking sheet that has either been buttered or lined with a fresh sheet of parchment paper. Leave at least 2 inches between each scone.


Beat remaining egg in a small bowl with a pinch of salt. Brush the scones with egg wash and sprinkle them with remaining tablespoon of sugar. Bake until firm and golden, about 30 minutes. With a spatula, lift them to a wire rack to cool for 10 minutes.

(Don't know why those last two steps aren't included in the white box; they are part of the recipe too!)

Posted by bethanycavanaugh@gmail.com at 5:50 PM