New pajamas for The Boy have been at the top of the sewing list for a while, and when I got some awesome Japanese printed gauze and some coordinating super-soft knit out in Nippori Fabric Town, I knew what materials I would use for said jammies.  But I left all of the patterns I had drawn out over the years back in Portland when we moved overseas, so it was time for a new PJ pants pattern.

Flipping through my digital pattern files, I realized that I bought LouBee's Hosh Pants a while back, but had never tried them out.  They only go up to a size 6, which is already pushing it for my boy, so it was now or never to make him a pair.  I got some denim for a pair of jeans for him, but I thought I'd try out a simpler version of the Hosh to start with, to see if it would work as a jeans pattern down the line.  And what a good excuse to join the September Pattern Flip link-up! 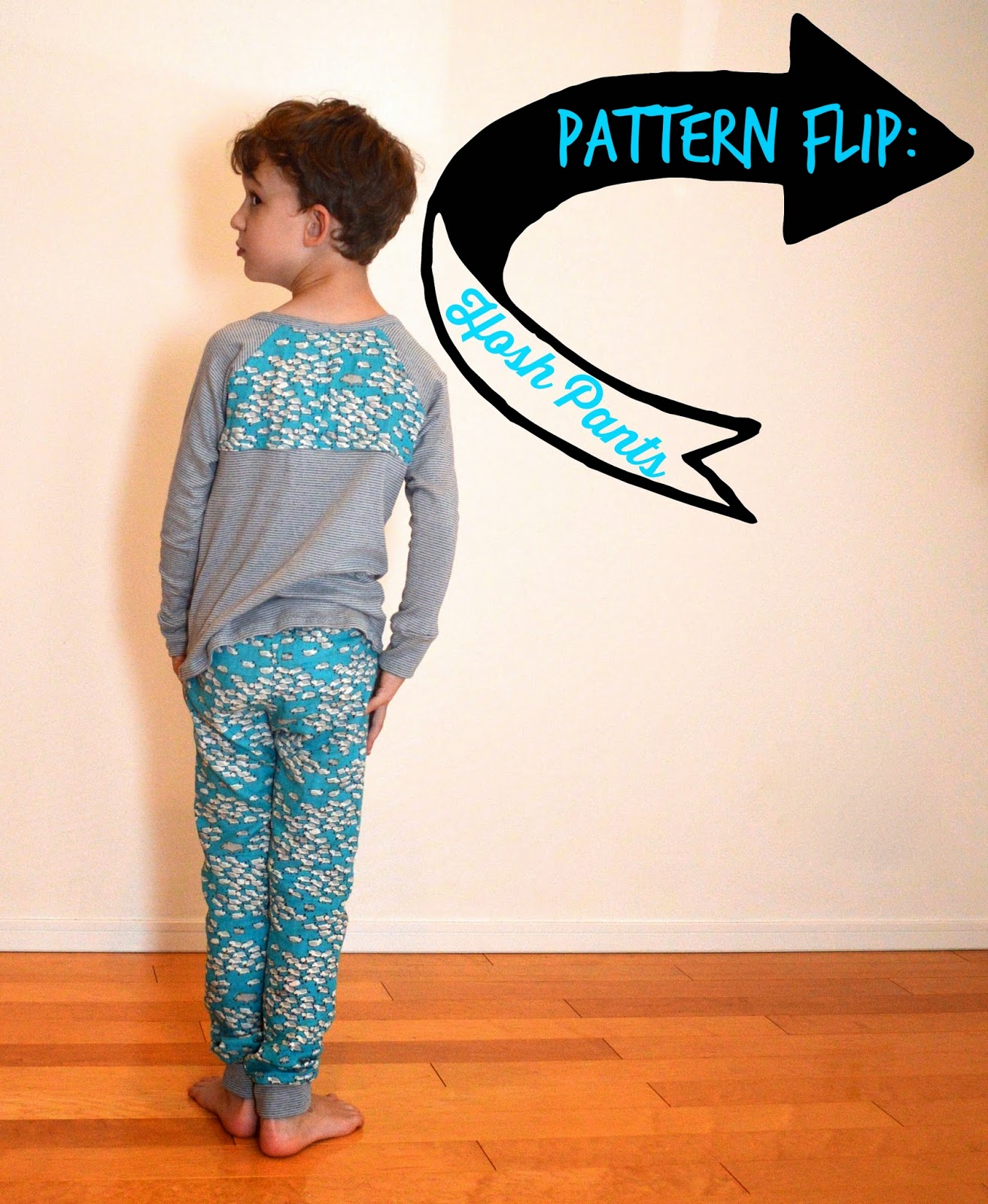 In order to flip the Hosh Pants into pajamas, I added just a little extra width when I cut out the pattern.  My gauze doesn't have stretch, but it does have what I would call "give"--it just feels comfy. I made a knit waistband with elastic inside instead of the elastic-tabbed waistband in the pattern.  And at the ankles, I made some knit cuffs. 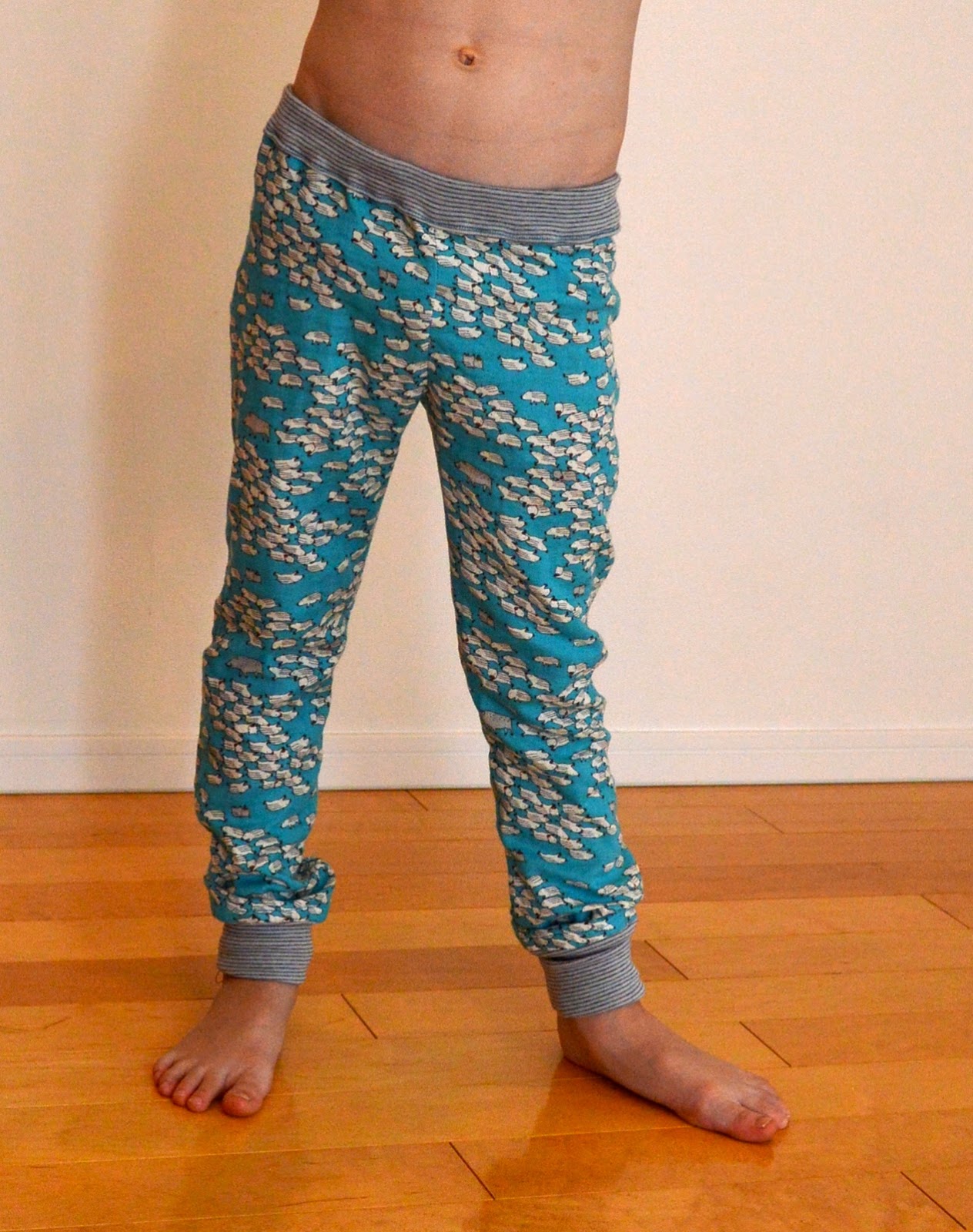 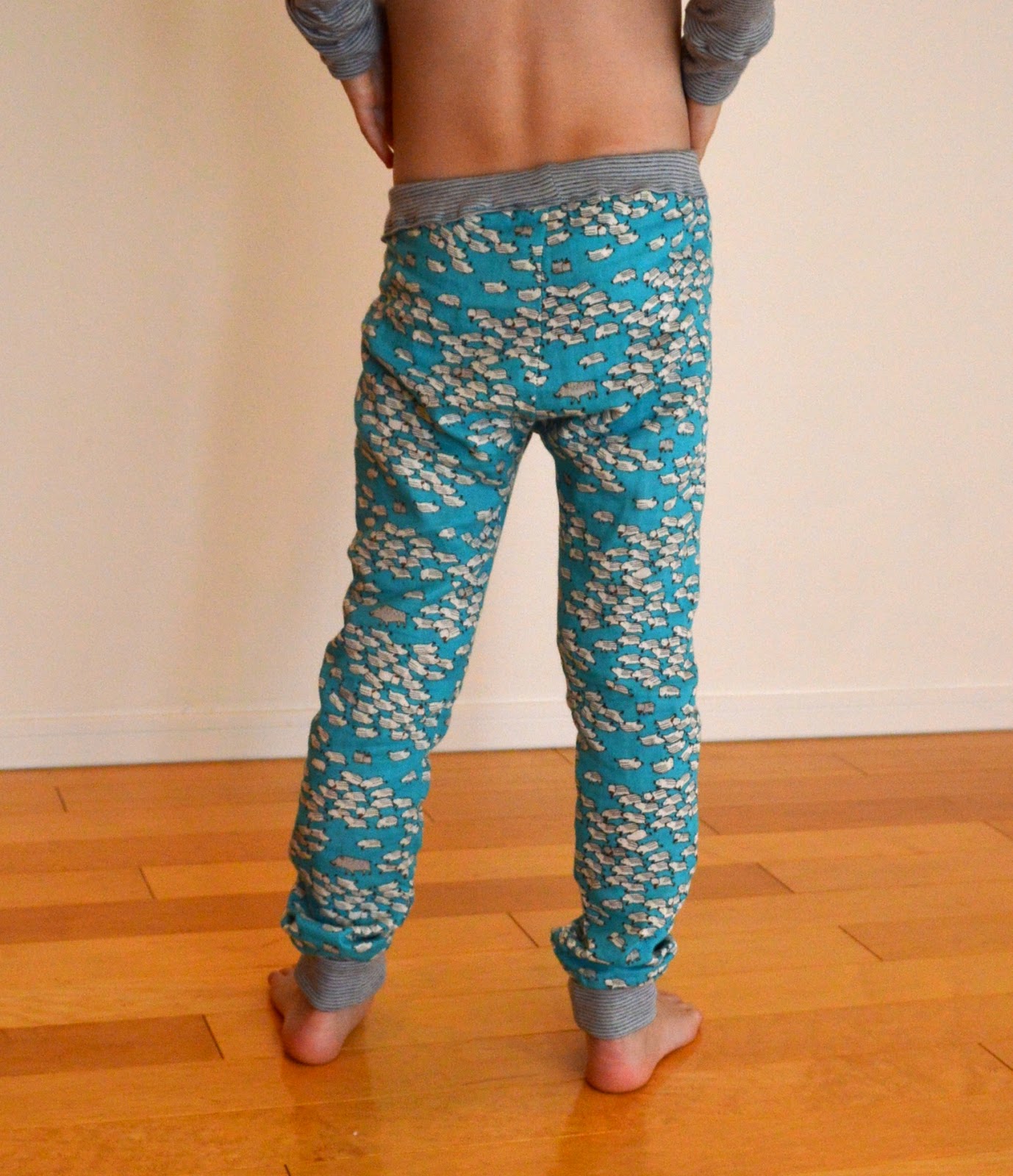 Since my boy is tall, I just cut out the size 6 length, and with the cuffs they were the perfect length.  But if you are making the right size for your kid, you will want to cut a little length off of the pattern so they aren't too long when you add the cuffs!  I think knit cuffs are a great way to make pajama pants last a little longer--you can make longer legs, but they won't dangle on the ground because the cuffs are snug on the ankle. 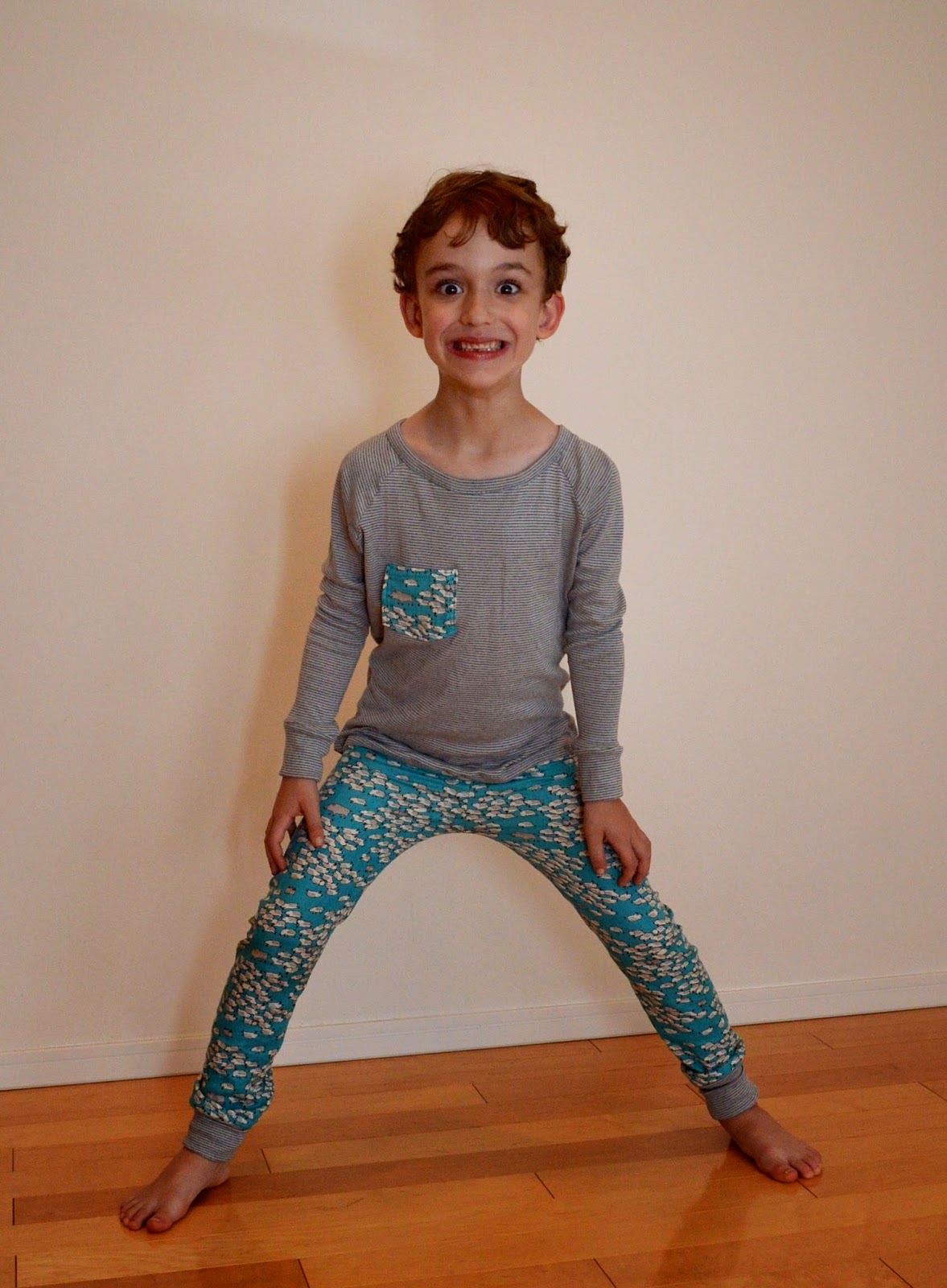 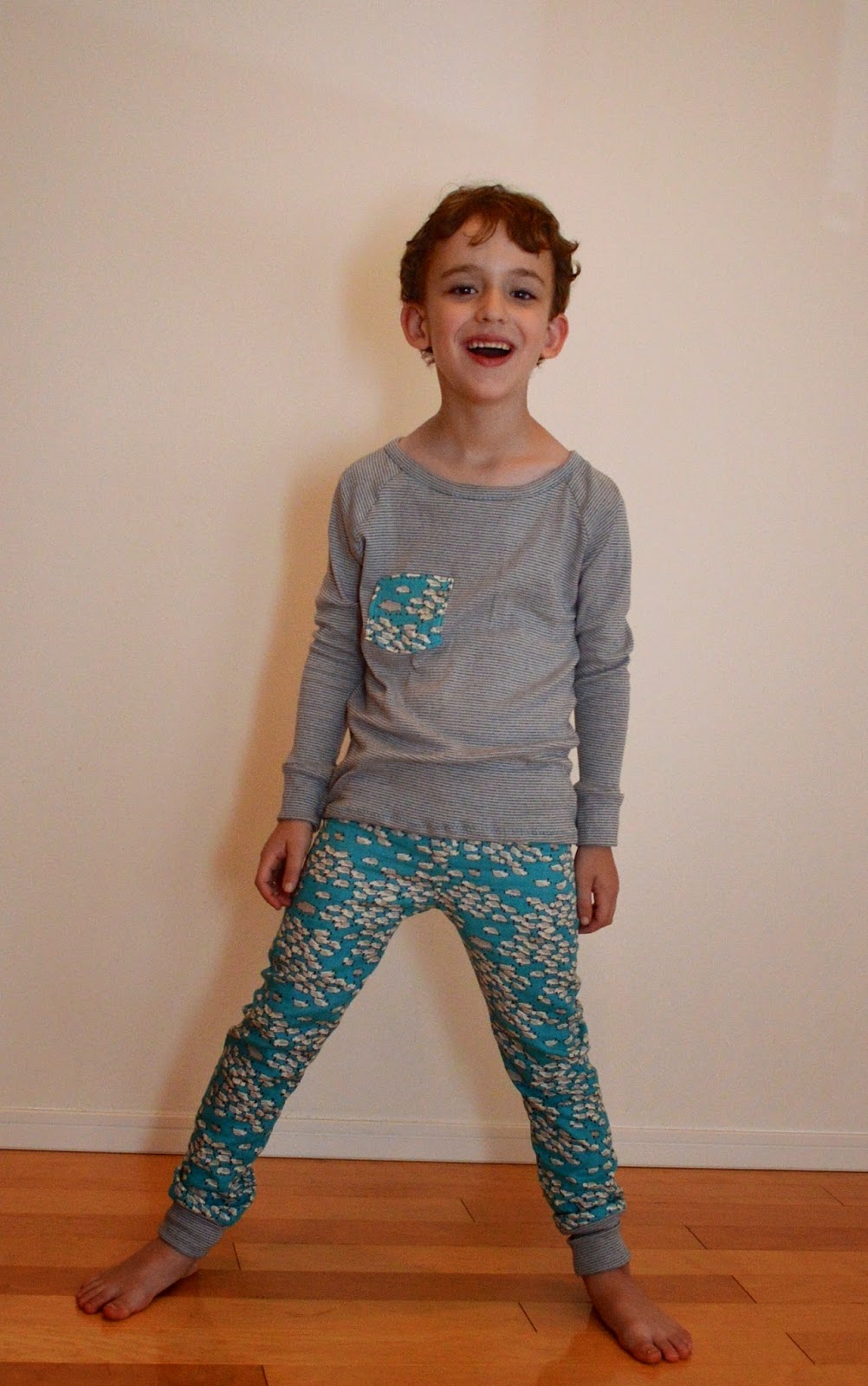 I think that using the Hosh pattern gave the pi's a more modern look than the traditional wide-leg jammies.  I love the knit skinny jammies on my kids, but I do have to admit that as my boy gets bigger, the knit ones do look a little too young for him, so this is a nice in-between step from a plain T-shirt and pj pants. 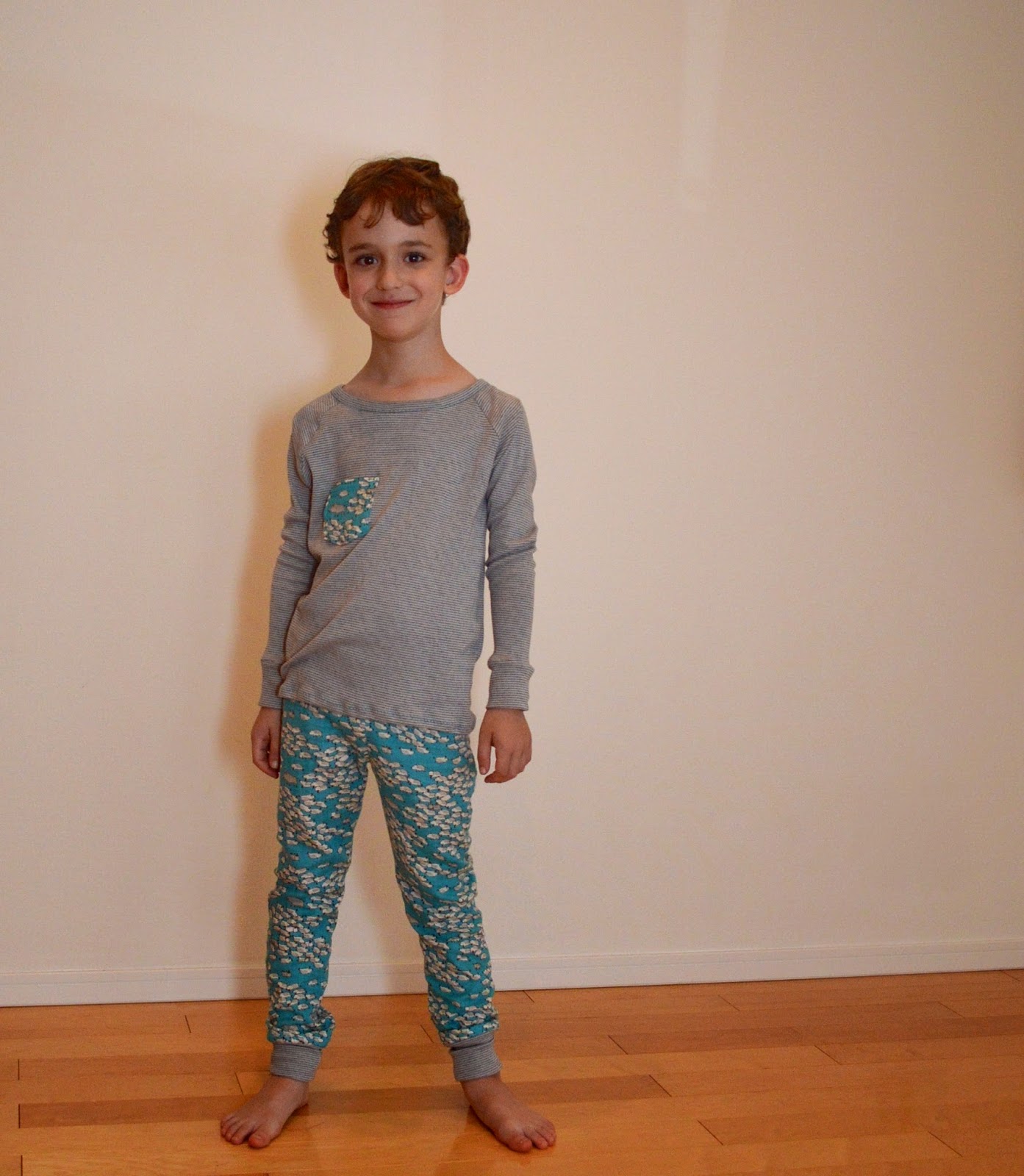 The top I made from a raglan tee pattern.  I started with this one but adapted the shape to fit my boy better--longer arms, narrower and longer body.  In the back I put a panel of the gauze, and added a pocket on the front to tie in the print (even though it's kind of silly to have a pocket on pj's!)  I used french seams when attaching the gauze since it's a loose weave, and I didn't want it to fray.  The inside looks so nicely finished as a result!

Oh, and don't you want a close-up of that fabric?  I fell in love with this print!

Less than $6 a yard in Tokyo's fabric town.  I LOVE THIS PLACE!  And the knit for his shirt was about $1 a yard!   Oh, and Little Sister wants a coordinating pair of pj's--I'm pretty sure I have enough left over for a nightgown!
Posted by bethanycavanaugh@gmail.com at 10:06 PM