Denim Challenge--Fall Style for the Boy

OK!  Selfish Sewing Week is over, and it's time to get back to Project Run and Play and sewing for my kids!  This week's challenge was denim, which means it's The Boy's turn to get an outfit (since Little Sister will not wear anything made of denim, no matter how cute and feminine I make it).

I struggled with this week a little, since The Boy has a school uniform this year and therefore needs far fewer clothes to get him through the season.  But when I found this cool denim (in--you guessed it--Nippori, Tokyo's Fabric Town), I got inspired to make him a fun fall outfit to wear on the weekends.

I can totally picture him wearing this on a crisp walk in the country when we are traveling around Japan this fall. 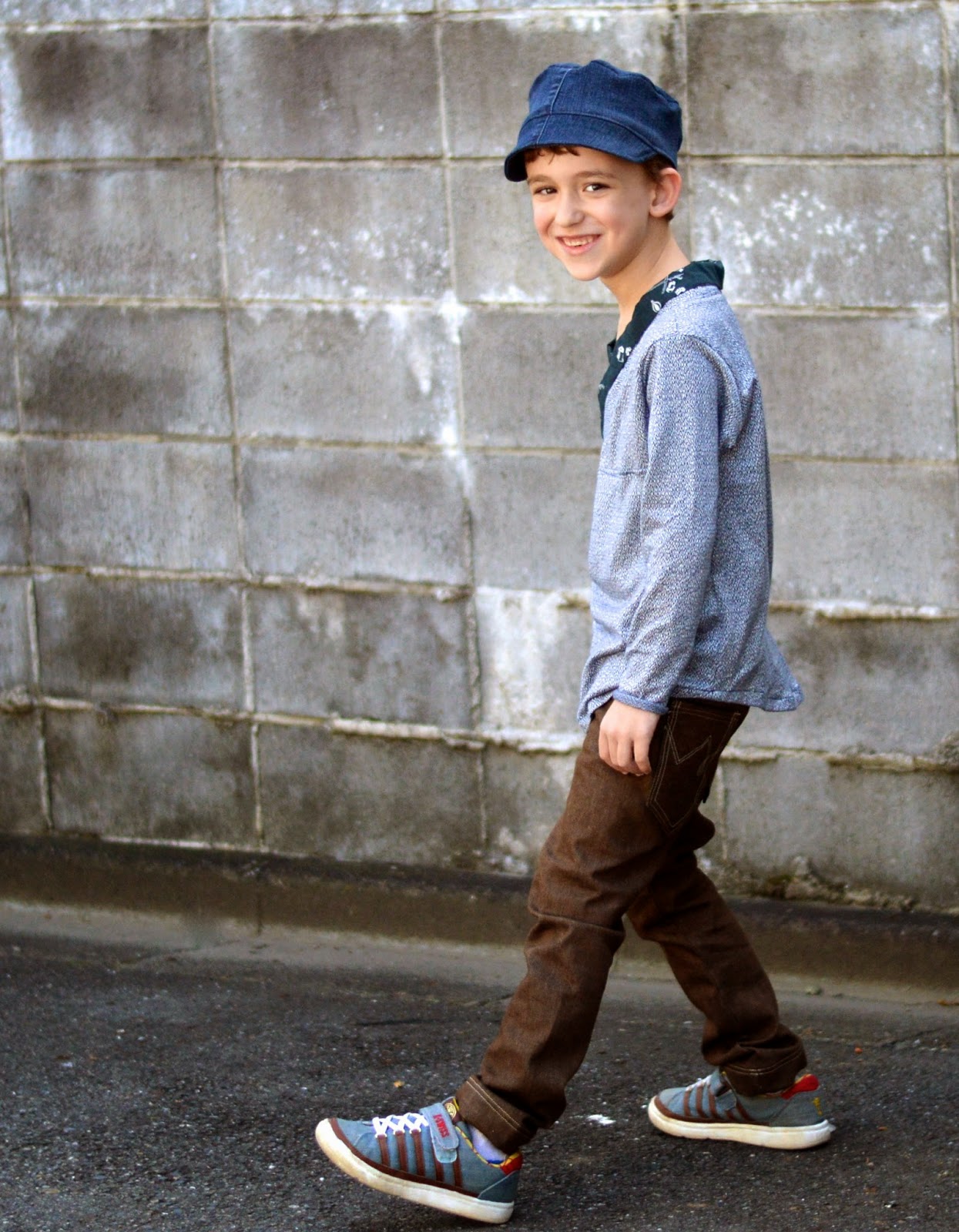 The brown denim caught my attention because in addition to having a slight stretch, it also had a really soft, brushed interior.

I hadn't seen this type of denim before, and it seemed to me like it would give some extra warmth without adding the bulk of a lining.  I started with the unisex Hosh Pants pattern from LouBee Clothing, but sized it up since he's already out of the size 6.  I also widened the leg slightly (more than the upsizing would have been), and opted for a knit casing for an elastic waistband rather than the button-tab elastic.  Oh, and I added a faux fly, using this tutorial from Melly Sews.


One final touch on the jeans--I freehanded a loose "LJ" on the back pockets--The Boy's first and middle initials ;)   He loves that! 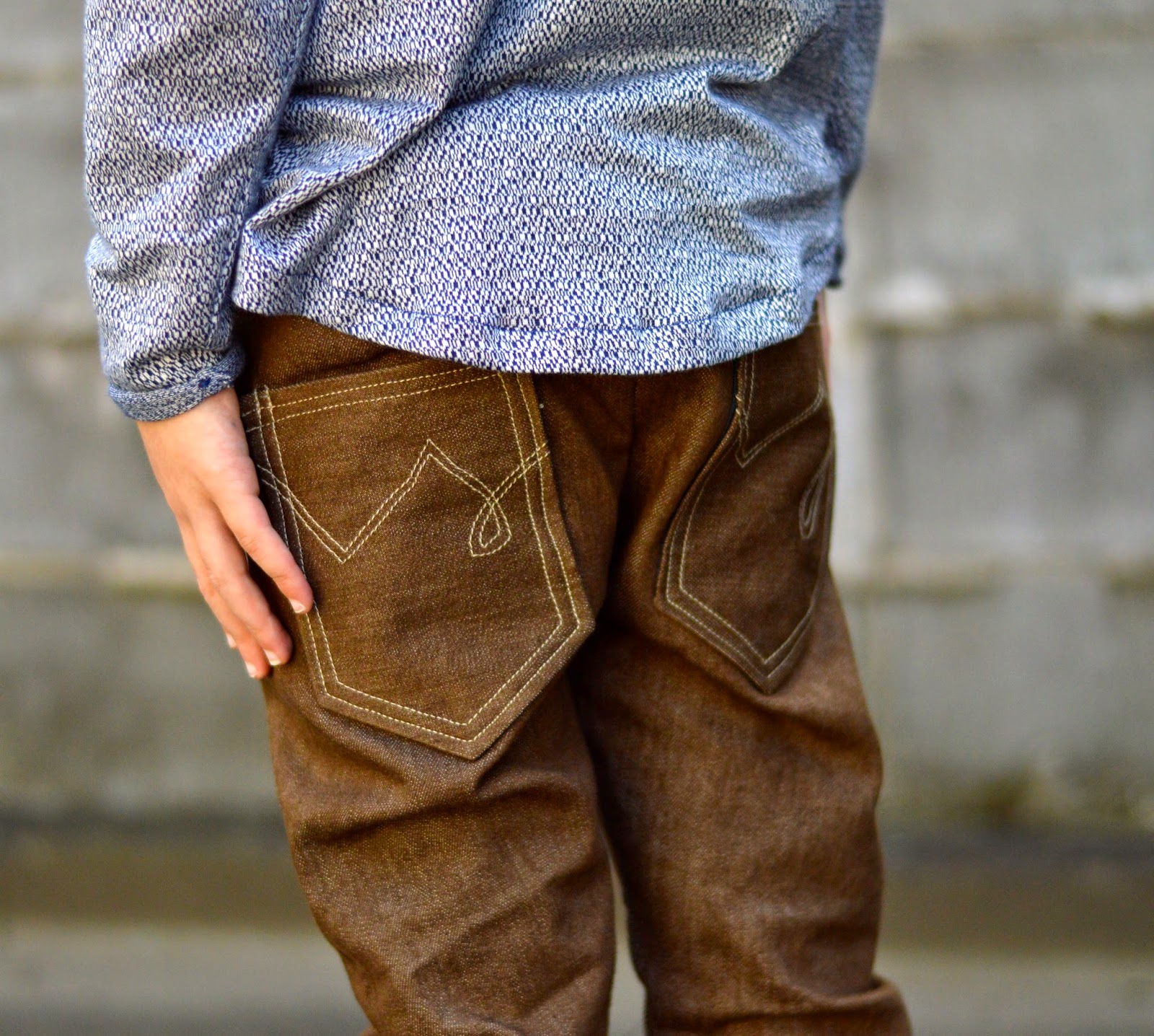 And I lined the pockets with the same fabric I used on his shawl collar, even though it's pretty much impossible to see. 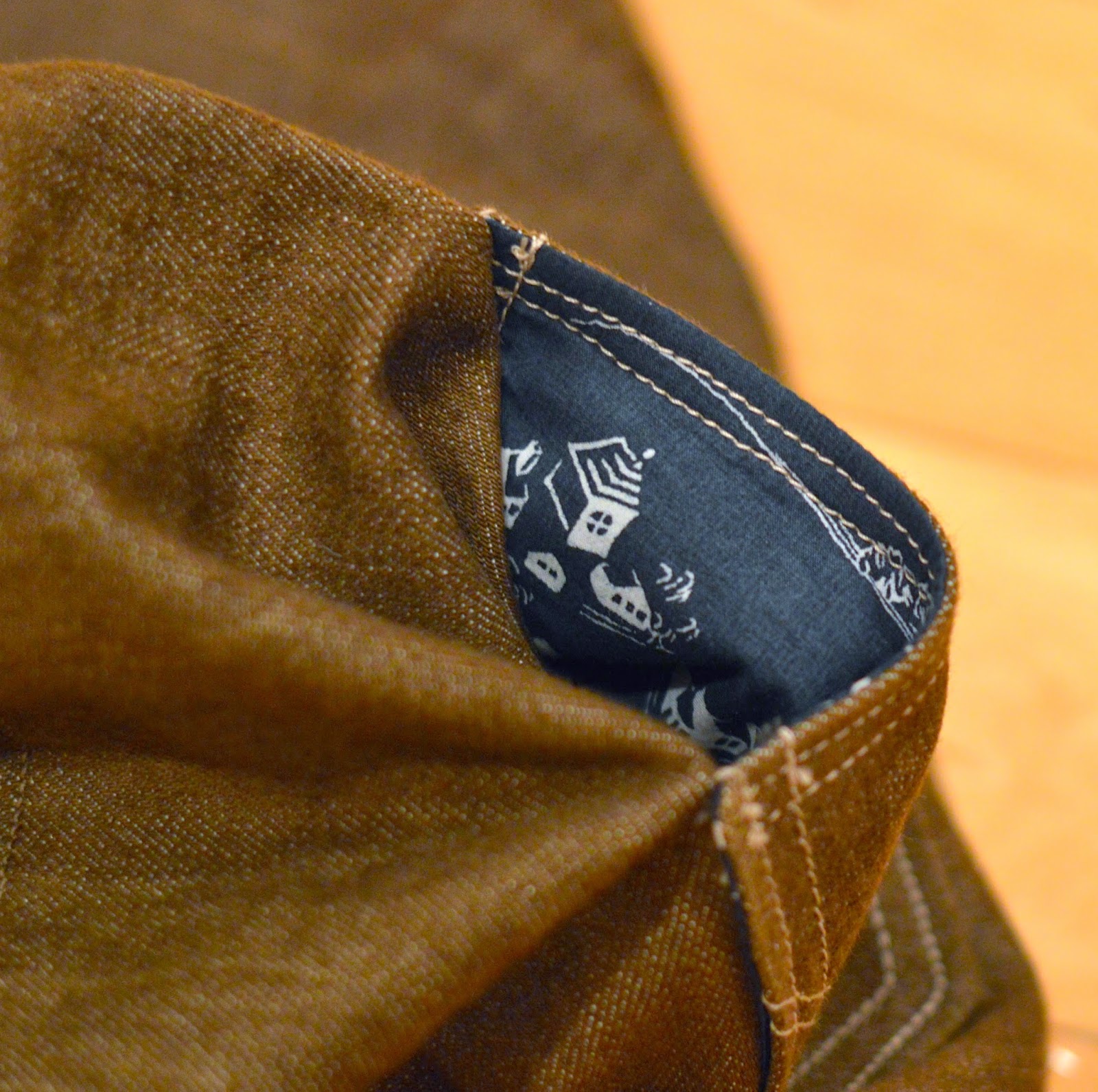 His shirt is not made of denim, but this variegated blue knit had a denim feel for me.  And the woven print I used for the collar also has a denim-like variation in the solid background color that it's hard to capture on film, so you'll just have to take my word for it.

I used the free Scrubby Jams top pattern from Sewing Mama RaeAnna as a jumping off point for this shirt, but cut it narrower since I was using knit, and made some adjustments to the top pieces and the binding to get this shawl collar effect. 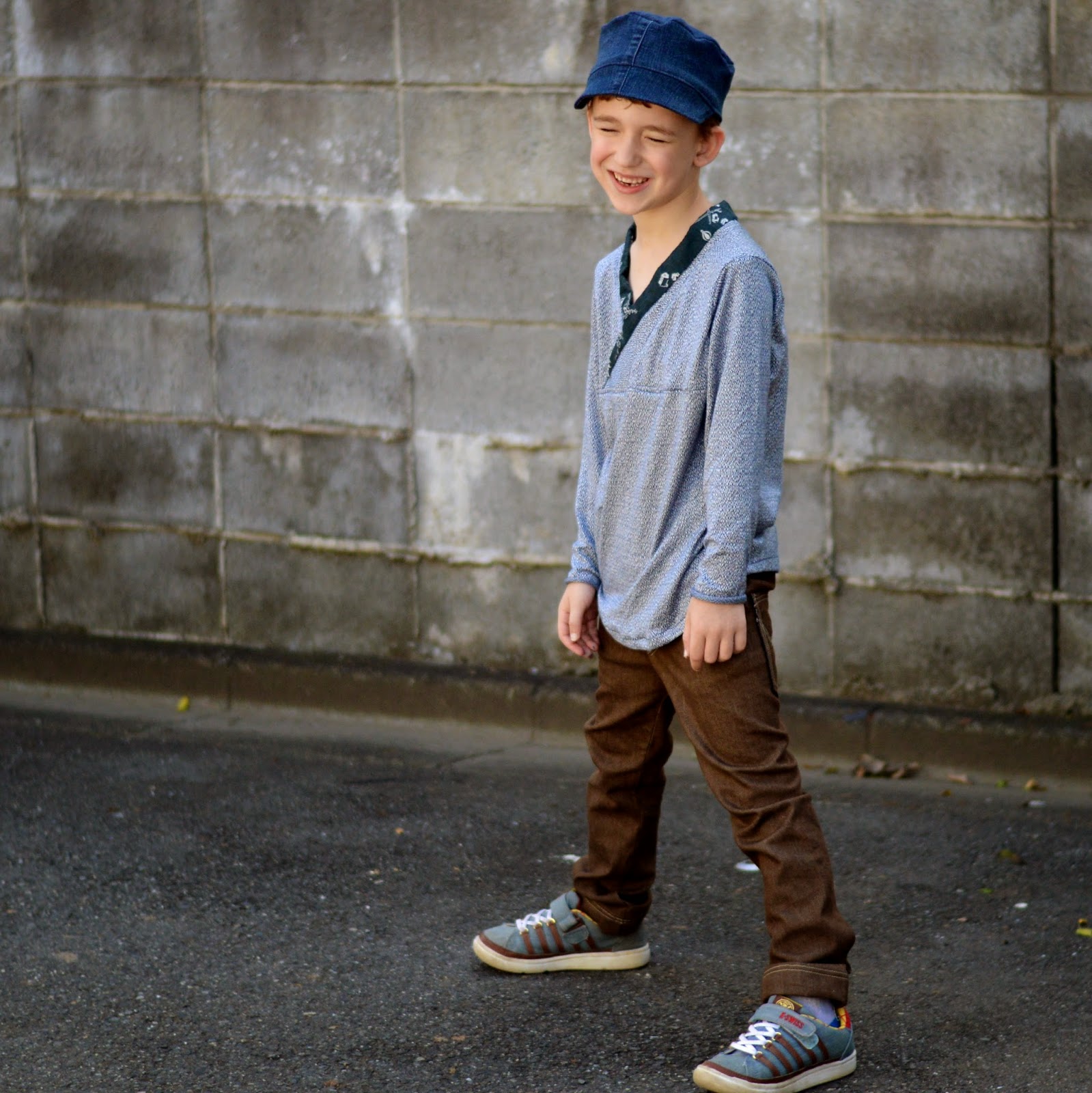 The collar is hand-tacked in several places so it looks just casually folded over but in reality it's not going anywhere.  And I did a rolled hem on the sleeves--I was planning on adding a cuff, but they were exactly the right length and the fabric rolled nicely, so I just tacked that in place too.  I can always add a cuff later when his arms get too long for it!

I like taking the denim blue colors and textures but mixing it with actual denim in a different color, avoiding the Texas Tuxedo look. 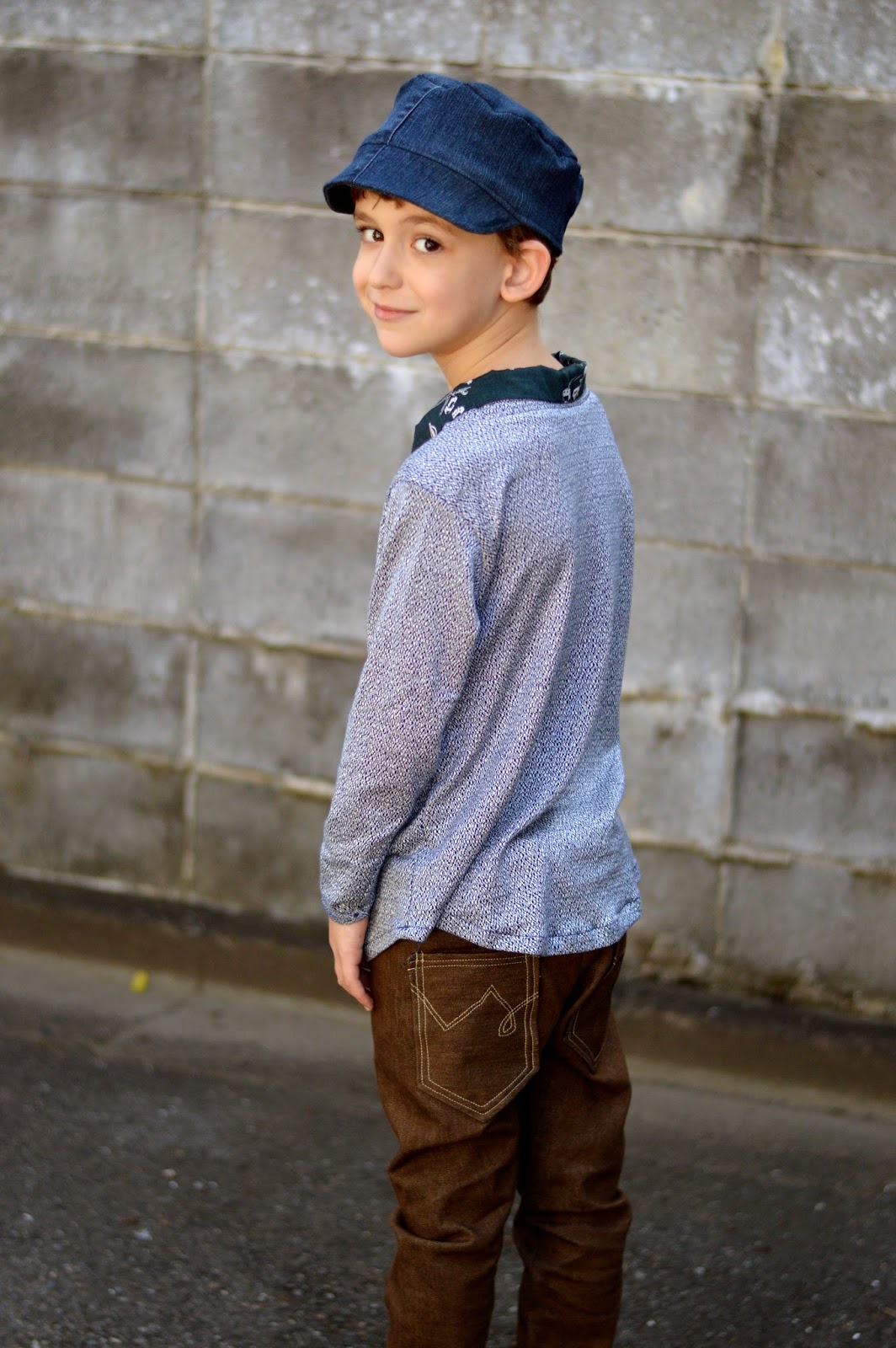 The final touch was the cap, which I made out of an old jean skirt of mine using this free sunhat pattern from Lusa Organics.  I made the brim smaller, and since the denim was a little thicker than the cottons shown in the tutorial I thought I could get away with a double layer of interfacing on the brim since I didn't have any hat brim insert material.

It seems to have worked! 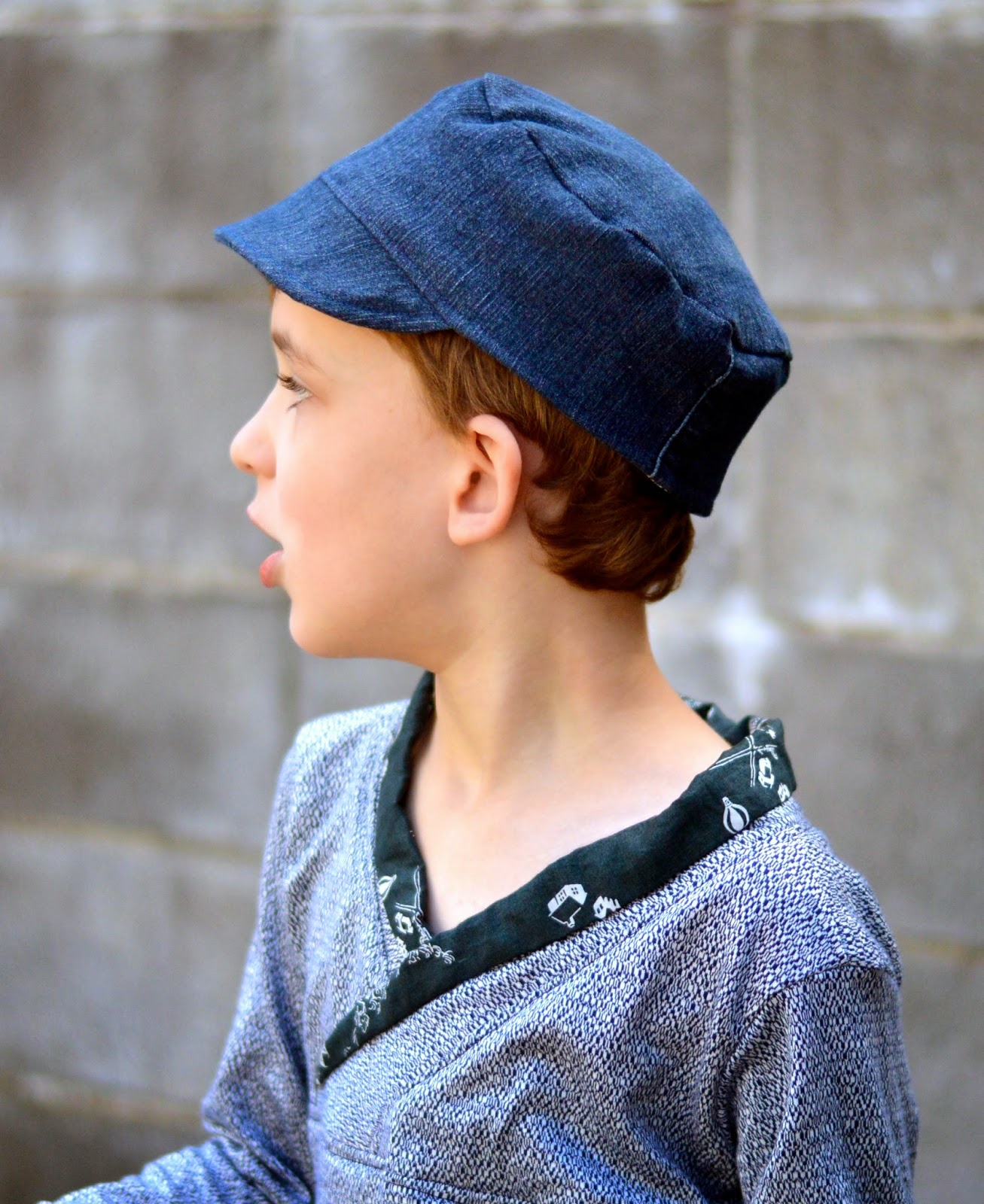 The hat lining is the same knit I used on the shirt. 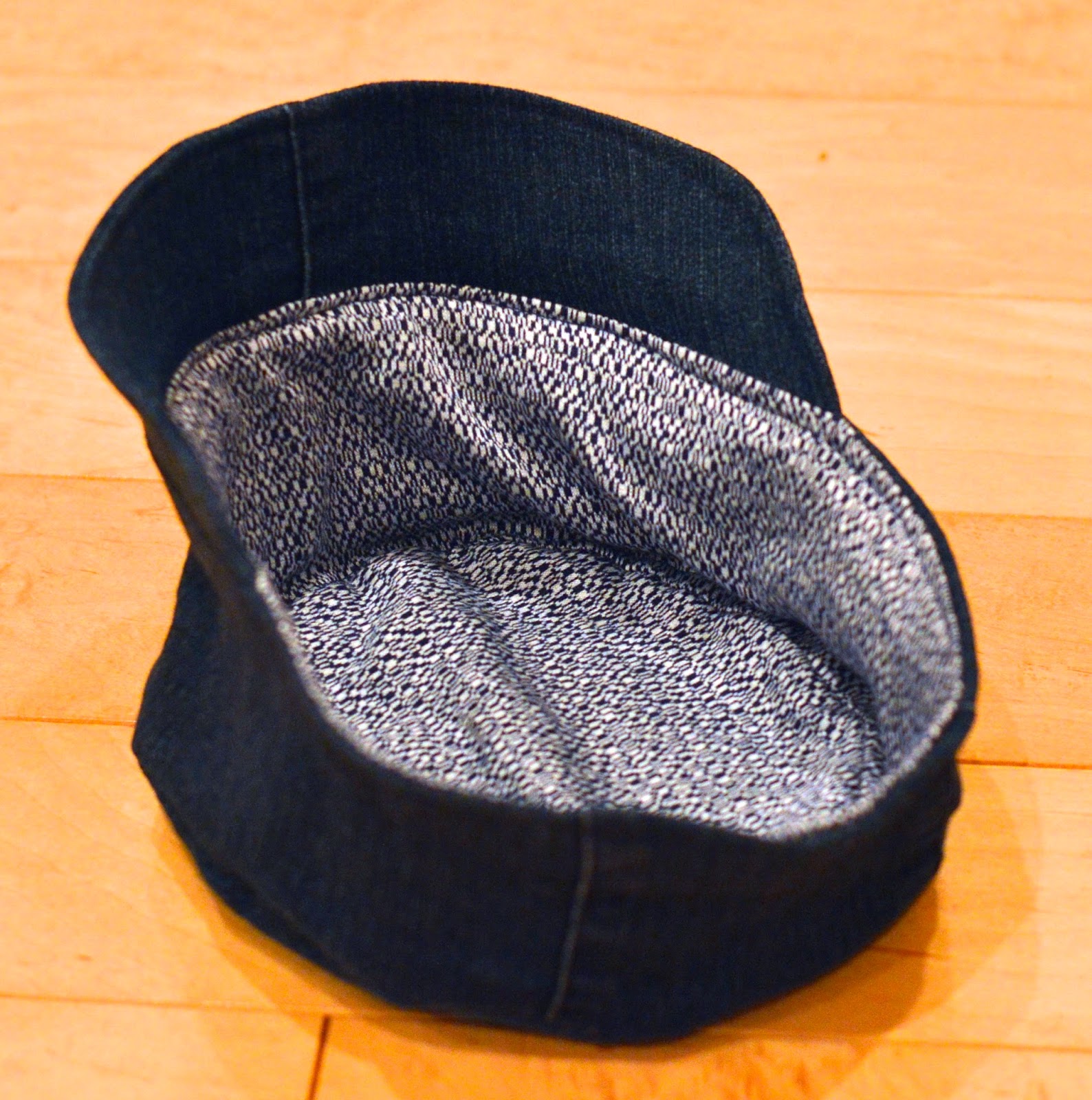 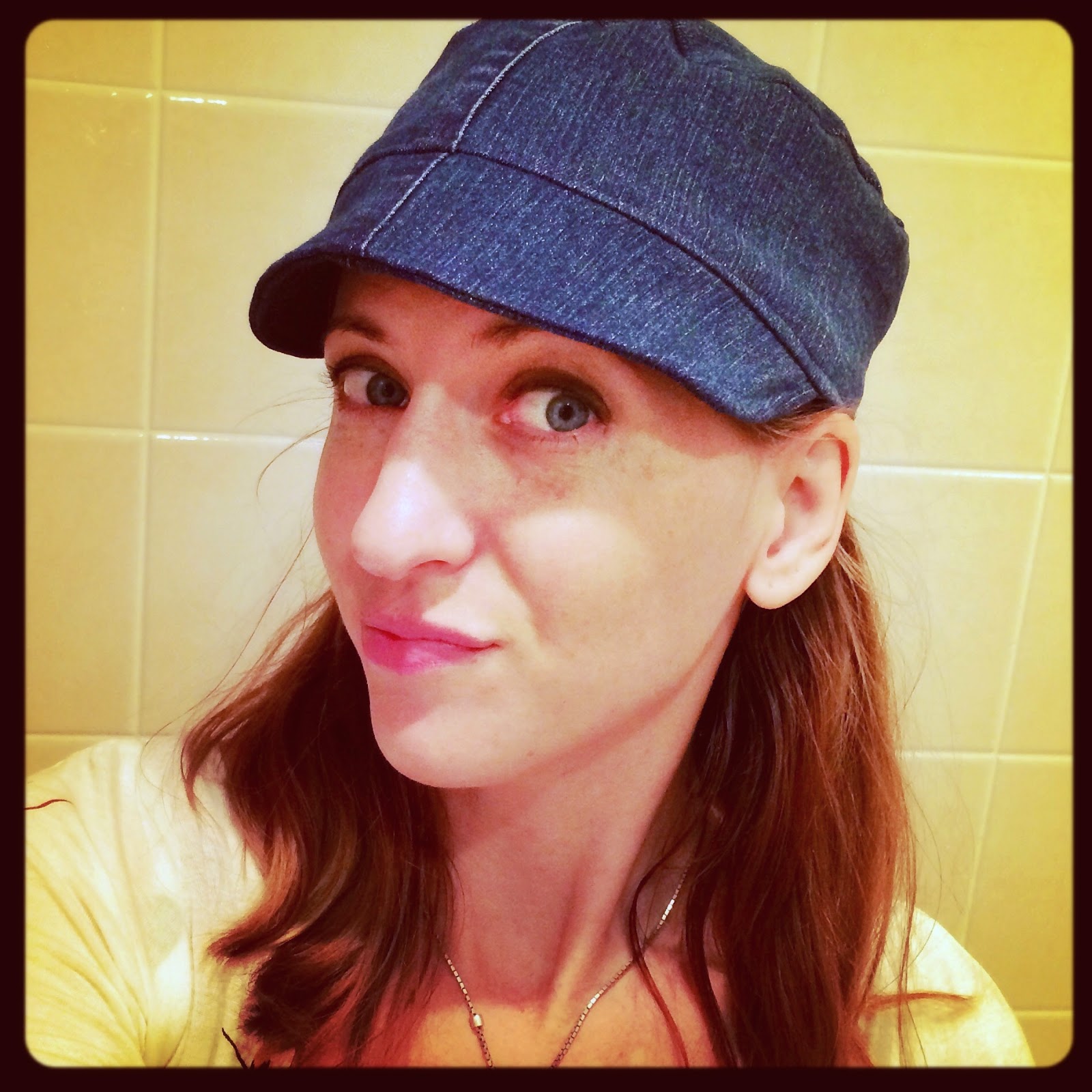 And it just wouldn't be a photo shoot with my boy if there wasn't a pic of him airborne, so here you go! 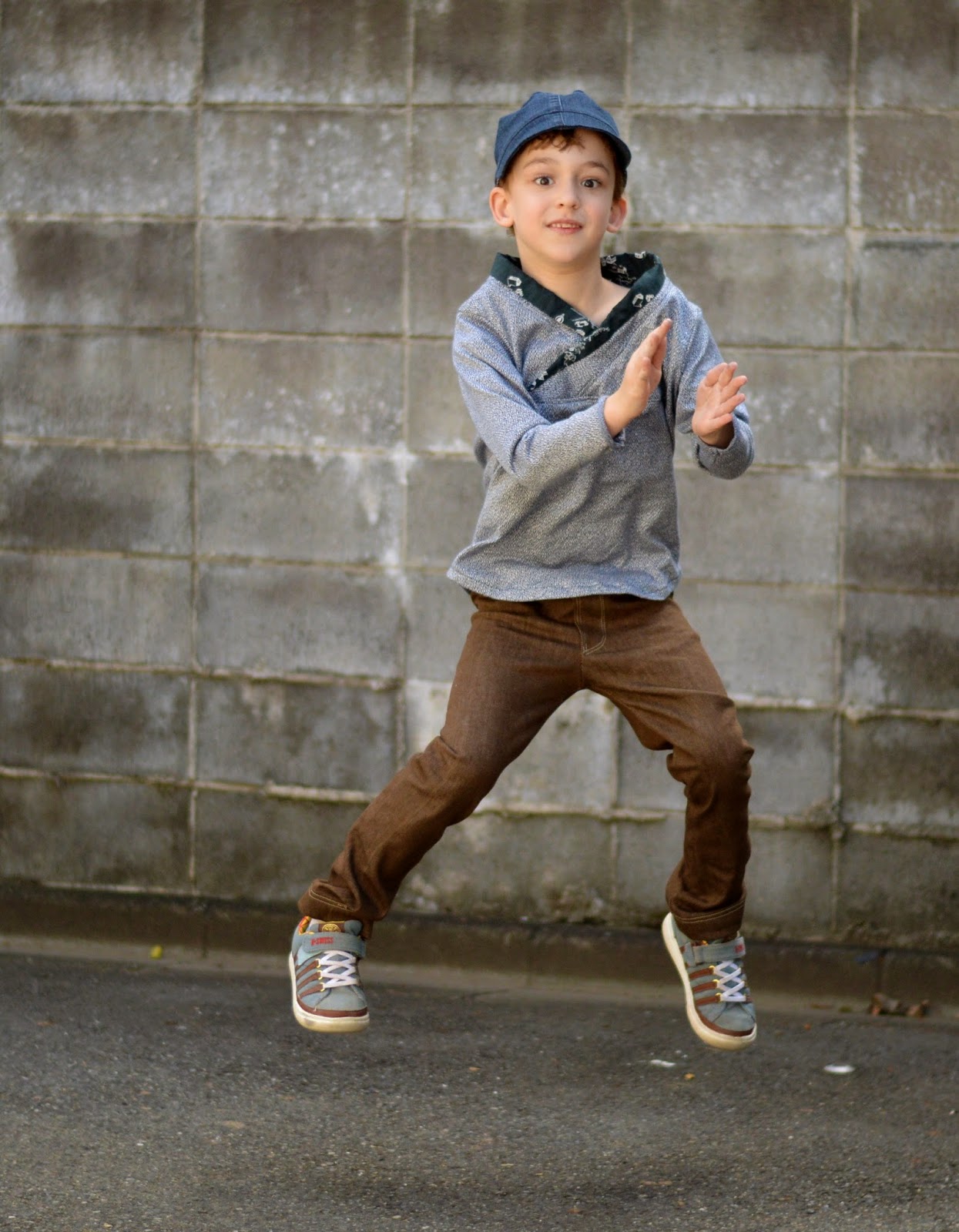 Posted by bethanycavanaugh@gmail.com at 5:20 AM