Just in the nick of time, these costumes are done! 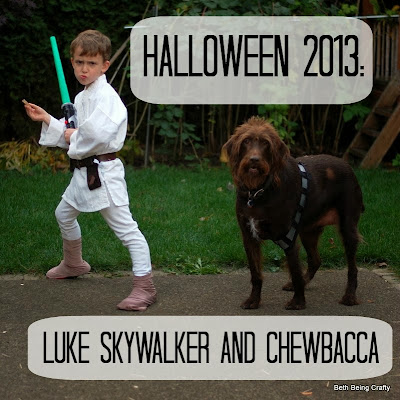 Now, look.  I know that Chewbacca isn't Luke Skywalker's best friend.  But The Boy wanted to be Luke, not Han.  And that dog--well, if there was any sort of Star Wars costuming going on, I was determined to dress her up as Chewbacca.  Originally, back when Little Sister was going to be Princess Leia (instead of Rapunzel), then someone in the family would have dressed as Han Solo so that Chewbacca was tied in a little better.  But you cannot deny me the chance to put a space bandolier on that dog and call her Chewy.  I have been imagining it since she was a puppy 10 years ago.

Since I'm on the subject, I'll talk about the dog costume first.  My rules were that I would spend no money and little effort on this costume, since it was FOR A DOG.  So I made a strap out of an old piece of black upholstery fabric that I had in my stash, attached velcro to the ends to hold it together, stuck a piece of duct tape down the length, and attached strips of black pre-made bias tape that came from Grandma's stash by sewing down either side of the duct tape.  DONE.

I had planned on making The Boy's whole costume, but when he started Tae Kwon Do at the community center a few weeks ago, he got really excited about the uniform.  His dad told him that if he earned "Student of the Week," he'd buy him a uniform.  Well, that uniform pretty much looks exactly like what Luke Skywalker wears.  I wasn't going to reinvent the wheel.  It did take him until October 26th to earn it, but I believed in him.  I wasn't totally off the hook though.  First of all, the pants were way too baggy.  So I made a pair of more Luke-ish leggings out of a pair of sweat pants I picked up at Goodwill, by tracing around a pair of his PJ pants.


That left the belt and the boots.  And lo and behold, look what Melly Sews posted last week!  Tutorials for a Luke Skywalker belt and easy boots!  I totally lucked out.  I cut down an old leather belt I had saved, and used a faux-leather remnant I bought a while back for a project I never got around to for the belt.  I used velcro on the flaps instead of snaps, and I did change the light saber holder so that it would actually hold the light saber, which is handy. 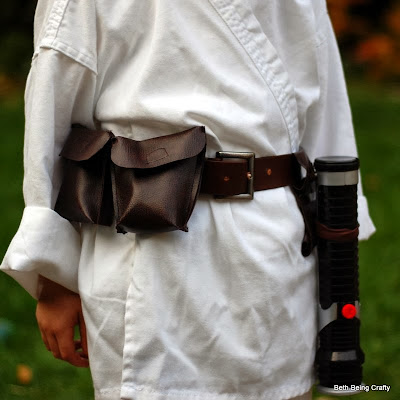 And the boots were super easy, and they work great!  These I made from a weird pair of knit pants found at Goodwill--there was a surprising lack of anything beige in the t-shirt sections.

Boy, you give a kid a light saber, and all of a sudden he just wants to pose for pictures.  He's got some moves, I tell you. This is what I got when the posing was pretty intense and I asked for "just a casual, relaxed Luke." 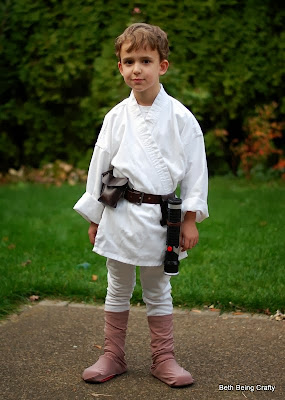 And if I ever complain again about how hard it is to take pictures of kids, I need to direct myself back to this post, where I tried to photograph a kid AND a dog.  CRAZY impossible.

We tried using dog treats.  Want to see what happens when Luke carries Chewbacca treats in one of his pouches? 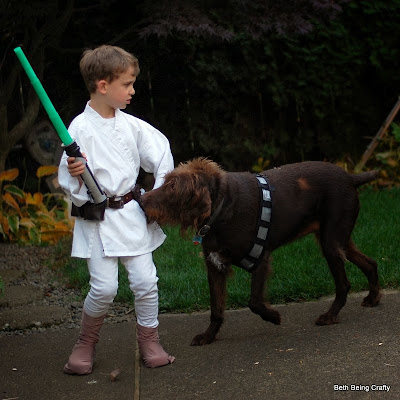 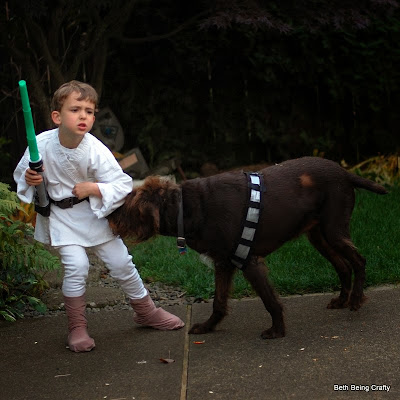 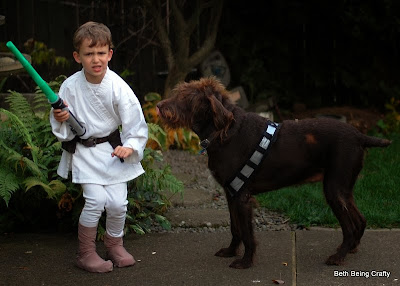 We are so ready for trick-or-treating tomorrow! 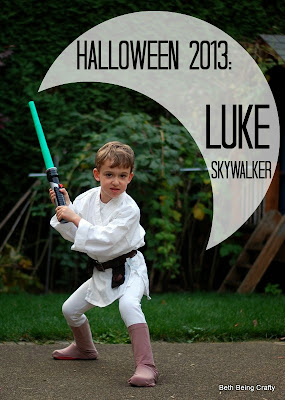 Posted by bethanycavanaugh@gmail.com at 10:31 PM