Every time I think about this shirt I made for The Boy to wear on Easter, I can't help but think of Boyz II Men.  But that's ridiculous, because this shirt went from Men II Boyz.  Get it together, Brain!

Anyway, this was a really simple transformation.  Basically I used a boys' short-sleeved button down as my template and cut the big shirt up into the right size pieces and sewed them back together.  I didn't separate the front from the back, and I left the neckline alone, so there was just the body piece, and the two sleeves (cut from the bottom of the original sleeve, of course, so I didn't have to hem them).  I laid the body out, right side up, so that the neck hole was in the middle, and laid the flat sleeve pieces right-side-down on top and pinned the raw edges together (a la this tutorial from Melly Sews).  Once the sleeves were on, I sewed the sides closed starting with the sleeves and ending with the bottom of the shirt, then hemmed the bottom.  So easy! 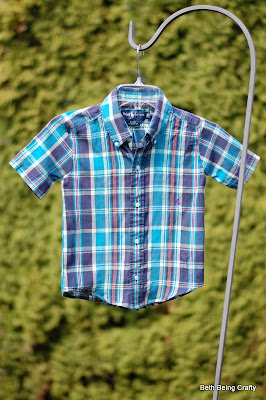 I was worried that the neck opening would look awkwardly huge since it's from a men's shirt (size medium, for the record), but I think you would never even know!  It doesn't look too big at all.  And my boy doesn't have a beefy neck or anything.

The one thing that's a little funny is that the little embroidered logo that was once where a chest pocket might be is situated kind of on the middle of his torso.  So if your original shirt had a pocket, that might look kind of weird. 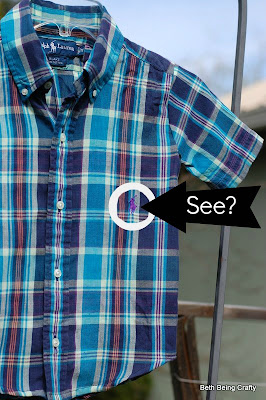 This shirt belonged to my grandpa, and I love being able to repurpose stuff like that.  He always wore blue that brought out his bright blue eyes, so when The Boy has this on it makes me think of him.


Which is not to say that The Boy doesn't make it his own! 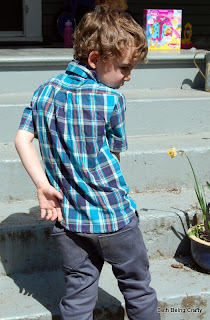 Here's the before pic!  I remembered to take one this time :) 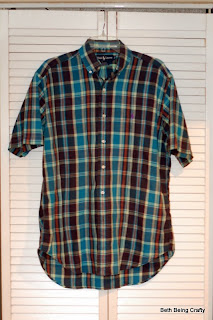 Posted by bethanycavanaugh@gmail.com at 6:22 PM