I got to go to a baby shower for one of my high school buddies that I haven't seen other than via facebook in  probably 10 years.  She's having a little girl, and this mama is decidedly not a girly girl.  I had to go a little girly, because that's my style, but I thought bringing out the yellow and gray combo would be the perfect way to avoid girly overkill. 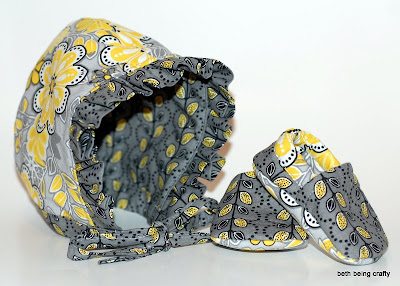 I had been wanting to try this reversible ruffled bonnet from Prudent Baby (tutorial with printable pattern) ever since I saw the pattern, and I think it makes a great gift!  Especially when paired with these sweet little baby shoes.

The bonnet is reversible: 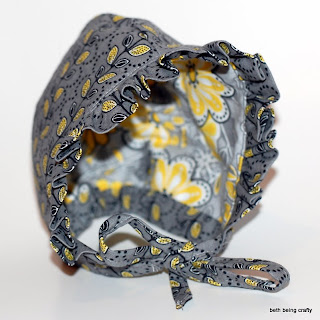 And it has a little elastic strip in the back to keep it snug without being too tight. 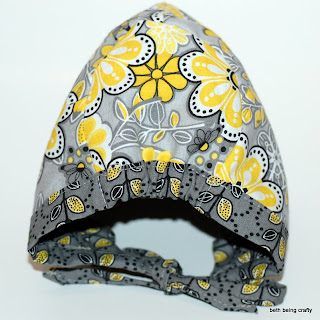 For the bonnet, I made strings that tie in a bow rather than the super-cute snap-tie from the tutorial, mostly because I didn't have any functional snaps and didn't want to go to the store.

The shoes came from this tutorial from Michael Miller fabrics.  Instead of the fleece/shearling they suggest for the sole, I used one of my fabrics with fusible fleece attached for the outsole, and the coordinating fabric, also with fusible fleece ironed on, for the insole.  I just basted them together (wrong sides together) and then treated it as one "sole" piece when assembling the shoe.  Also, when I made my elastic casing on the heel portion of the shoe, I made the casing visible on the outside (so basically, attached my heel portion inside-out) because I liked the way the contrast fabric looked.

I learned at this shower that I have been doing a good job of making Little Sister's clothes and staying away from the stores, because I knew that owls were a thing right now, but I had no idea how prevalent they were until almost every baby present involved owls in some way!  And no, it wasn't what she had registered for!  I love them because they're cute AND there's the suggestion of wisdom/smarts, so it makes sense to me that people have seized the owl.  Even I was not immune: 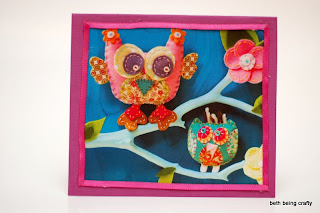 This was the card I gave.  I mentioned before that I didn't want to go to the store to make this gift--well, that extended to a baby shower card!  I didn't have one around (or a blank one that would work), but I did have this cute mama/baby owl card that I got for my birthday.  I cut out part of the image, glued it to a blank notecard, and covered the paper edge by hot-gluing on a little ribbon.  Tacky?  Or resourceful?  You be the judge.

One of the reasons I was so excited about this shower was that the invitation included a fabric square.  The instructions said that half the guests had received a onesie to decorate, and the others had gotten a quilt square.  The mom-to-be would be presented with the onesies and the finished quilt at the shower (her mom assembled the quilt), and the guests would vote on the favorites and winners would get prizes!  Well, I'm not a quilter, but one square I figured I could handle, and I was planning to kick some quilt square butt. 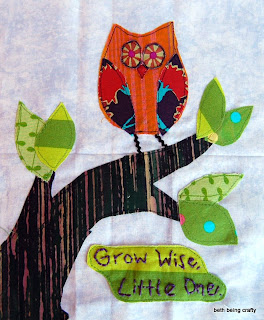 Owls again!  We voted on the onesies (some really cute ones--got some inspiration!), but mom-to-be was put on the spot to pick a favorite quilt square, and she understandably refused.  I know in my heart that I was the winner, but I totally forgive her for not wanting to embarrass her grandmother's inadequate square (totally kidding!)  I did take home a prize anyway--I know my fill-in-the-blank nursery rhymes!  Anyway, fun idea :)
Posted by bethanycavanaugh@gmail.com at 2:48 PM