The boy found the pegs that I removed from my thrifted mug trees (the ones I used to make these headband displays), and started playing with them.  We started with faces, but you know me...I couldn't leave well enough alone.

You could easily make these out of clothespins too, if you don't happen to be dismantling a couple of old mug trees.


I started by bringing the ends of a pipe cleaner together in the middle.  You could leave them like this and make wings, I suppose, but I decided to twist them and add little pipe cleaner hands.


I then twisted the arms around the pegs and bent them straight out.

The feet were a little trickier.  I wanted the dolls to be able to stand.  I will try to explain what I did, but I'm not going to lie, it was a lot of guesswork.

I first twisted the pipe cleaner into two feet with the ends sticking up. 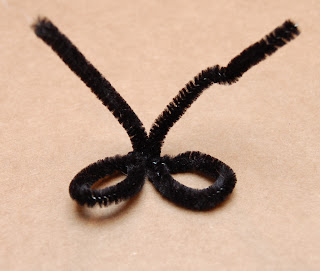 Then I sat the peg atop the feet.  Before wrapping the pipe cleaner around the peg, I twisted the two ends together up a little higher, to make a kind of holder for the peg.

Next were the outfits.  Since my boy picked green for the arms on his doll, I matched the shirt color to the arms.  As you can see, just a rectangle with armholes.


Poke the arms through the holes. 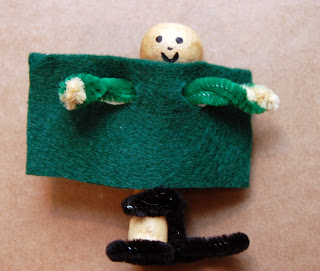 Then wrap the felt around and glue at the back (I used a hot glue gun). 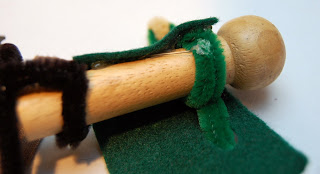 I did the same for the pants (without armholes, of course). 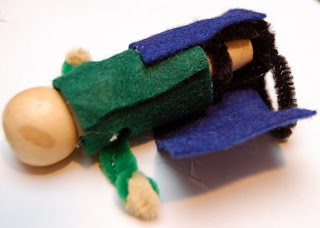 Then trimmed off the excess from my sloppy cutting job.  This is what happens when I try to work while the kids are "helping," instead of sleeping. 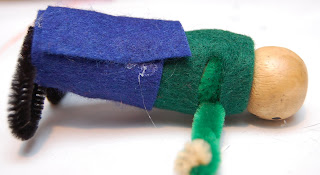 For the girl, I made the pants first, and wrapped them a little tighter, leggings-style. 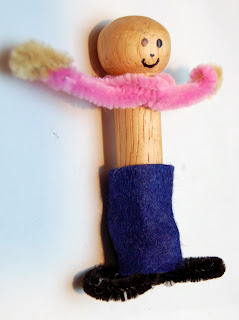 I cut the girl rectangle bigger, so I could make more of a dress out of it.  In the back, I angled the felt before gluing it so it would tent out a bit. 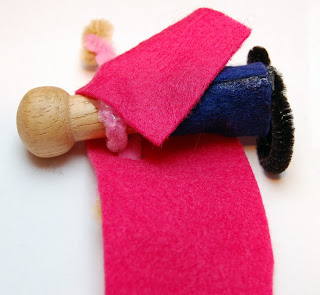 Now the hair.  Oh, the hair.  For the girl, I cut out a piece for bangs and a piece for the back of the head, then a skinny rectangle to go from side to side. 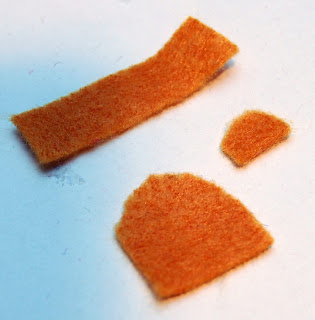 First I glued on the front and back. 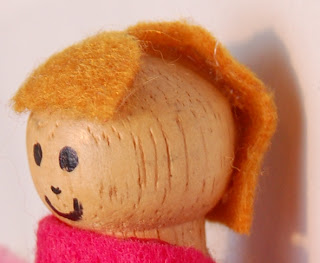 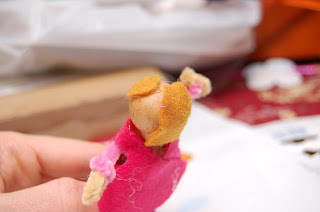 Then....wait, I guess I didn't take a picture of the finished hair.  Well, I just glued that skinny rectangle from ear to ear, over the top of her head.  I mean, where her ears would be.  If she had ears.  Wait for it:  the complete dolls are revealed at the end.

For the boy's hair.  Well, I had this plan of cutting a piece that looked like it wrapped around the ears, but it didn't come out right. 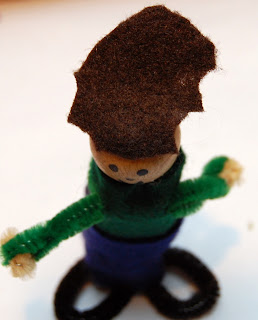 Let's just say, cut out pieces and glue them down until the boy's head is covered.

And TADA, two little wooden peg dolls!  I alse drew a line down the front of the pants with a sharpie for the separate legs, and OF COURSE I added a flower to the girl's hair.

The kids had a great time playing with them all afternoon... 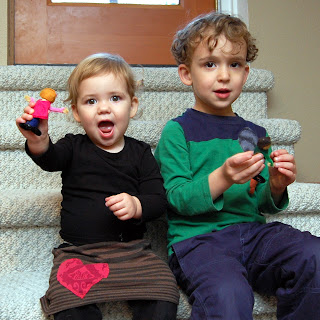 And forgot about them the next day and haven't been interested since.  So there you go.

Posted by bethanycavanaugh@gmail.com at 3:35 PM