A couple of weeks ago I started telling you all about some of the recipes I have been trying lately.  Well, I hope I can still remember what I wanted to tell you!

Have you ever made eggplant parmesan?  I never remember until I'm in the middle of the process what a pain in the rear it is.  Why do you have to do SO MUCH to an eggplant to make it edible?  Well, the end result of this eggplant parmesan was really good, but I really wish that I had more eggplant so that I could have prepared a bunch of extra eggplant to freeze for another batch of eggplant parmesan at a later date.  That's really the time-consuming part, and once your eggplants are ready to go this is totally easy.

One bonus about this recipe is that you can also use the sauce for other things.  Instead of canned tomatoes, I used fresh tomatoes from our garden mixed with the oven roasted ones I talked about in that other food post.  I also added a little red wine as the sauce reduced.

One bummer about this recipe is that you really only need maybe 1/3 of the amount of breadcrumbs it calls for. This was disappointing, because I made a bunch of breadcrumbs from crusts that I had frozen, but I didn't have quite enough and had to supplement with storebought breadcrumbs, then I mixed in my parmesan and spices, and--had tons left over.  So if I'd just stuck with my own breadcrumbs I would have been fine.  Oh well, I used the leftover to make these pork cutlets, which also turned out really well.

Blast! I could have sworn I took pictures of my eggplant parmesan, but it turns out I didn't (or they are buried somewhere in my photo files beyond my search capabilities at this time).  But it pretty much looked how you would expect.

Now I DID take pictures of this one, because it was so darn pretty.  I saw this recipe for apple bread braid, and I just love the way it looks! 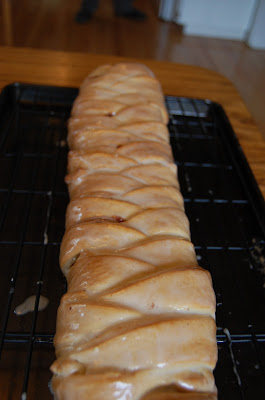 But making bread seems pretty complicated and time-consuming to me, and I've been loving the results of using frozen bread dough, so I thought I'd try it out with this recipe.  It worked like a charm!  And this was a fun recipe to have the boy help out on--he was great at folding the bread strips over, and he loved painting the glaze on when it was done baking.  I'm going to try this same braided method to make a calzone using pizza dough.  I'll probably skip the powdered sugar glaze on that one.

Speaking of this frozen dough: 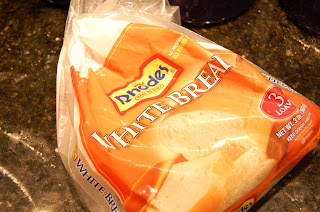 I also made a loaf of cinnamon-raisin swirl bread.

Just roll it out, sprinkle with cinnamon, sugar, and reconstituted raisins: 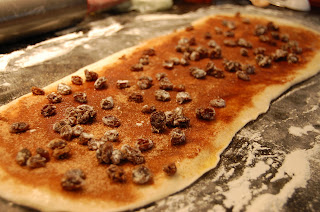 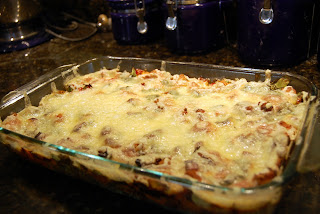 The recipe calls for roasted red peppers, but I didn't have those, and (have I mentioned these yet?)  I had the oven-roasted tomatoes that I made so I threw those in instead.  I've made this twice now, and the second time I didn't bother wilting the spinach like the recipe says to do, and it was just fine.  Also, I used a swiss/gruyere blend (pre-shredded, thank you Trader Joe's!) and that also worked out.  Just make sure to avoid the processed "gruyere"--yuck.  I got a laugh out of the directions that start with "preheat the oven to 375," followed by "mix your ingredients and refrigerate overnight."  I think I'll wait to do that preheating, thank you very much.

This dinner was very kid-friendly.  It also had a distinctly breakfasty vibe, because of the egginess + ham.  Would work well for a brunch. 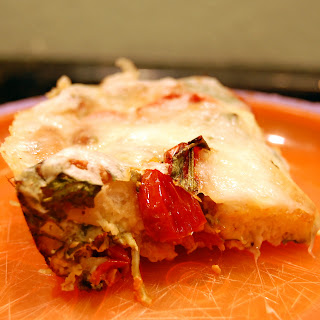 Anyhoo, I think that's it for today's recipe reviews--I will get back to you on the rest of that list at some point!
Posted by bethanycavanaugh@gmail.com at 2:48 PM

Email ThisBlogThis!Share to TwitterShare to FacebookShare to Pinterest
Labels: recipes