I had been trying to figure out things that I could make that were similar to my flower headbands but geared more towards boys, and my dad suggested pirate eyepatches, with a see-through portion so that they were safer for kids than completely blocking one eye.  I floated the idea on my Sewbaby Crafts facebook page, and one of my former students took me up on it.  So, not exactly the demographic I had in mind, but possibly even more awesome:

The soft elastic makes it nice and comfy.  I also put darts in the patch part of it so it doesn't totally squish your eyelashes.  The purple skull in the middle is see-through, although I think I would bag that part of the idea.  I like it in theory, but in practice, even though the fabric is see-through, it's not as easy as, you know, just seeing.  So your other eye compensates, and you might as well just have a full-on eyepatch.  And I feel like if I replaced it with an even less opaque material (mesh, or something) then it wouldn't look like an eyepatch anymore.  Thoughts?

Oh, and here's what it looks like close-up, when it's not on a head: 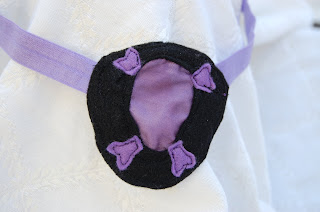 Which reminds me of one of my favorite jokes:

Q:  What did the hat say to the hat rack?
A:  You stay here, I'll go on a head.
Posted by bethanycavanaugh@gmail.com at 8:48 PM