It's Week 2 of Project Run and Play, and the theme is Cosplay.  You would think that after a year in Japan, I would have some great anime/manga inspiration here, but for some reason I just couldn't get into that whole thing.  I was thinking of sitting this week out, but then I realized that this week is leading up to Valentine's Day, and I was hit with the idea to make an outfit inspired by Disney's Queen of Hearts. 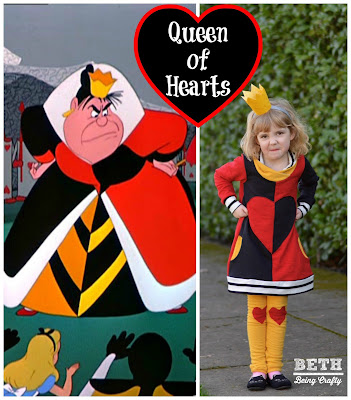 Little Sister had fun getting into character, even though she's typically sweeter than the inspirational queen.

When I started looking at pictures of the Queen of Hearts's outfit for inspiration, the collar made me think of LouBee Clothing's awesome Bimaa sweater.  I have sewn this pattern a few times, for both of my kids.  I used the shawl collar and made a slightly larger size to allow for the thicker fabric (I used a light french terry sweatshirt fabric that I got in Japan for 100 yen per meter (about 80 cents)--I miss the fabric shopping in Tokyo so much!).  I also extended the length into a tunic, angling out slightly for some extra room, so I made the band at the bottom larger to accommodate.

I love these little half-circle pockets that allow for a pop of color.  I've added them to quite a few things I've made--the tutorial is from Anu Miki, found here.  I had to add in the yellow--not only based on the inspiration outfit, but also because otherwise I would have ended up with two weeks in a row of red, black, and white all-knit outfits!

The fabric for the leggings was another 100 yen per meter find--I swear, the knits floor at Tomato in Nippori is a magical place!  I have a cardigan that I made for myself from this fabric--it is a soft and snuggly double knit--you can sort of see the dots joining the two layers in the pic below. I sort of guessed on the knee patch placement, and I NAILED IT! 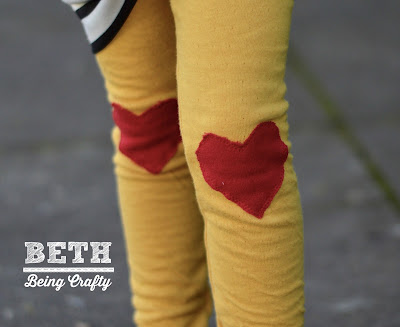 While I was getting ideas for this outfit, I tried out one of my Christmas gifts--this awesome design notebook is really fun for getting the creative juices flowing!  The body outlines are all grown women, so I had to shift the proportions to give myself an idea--does anybody know if they make one of these for children's designs?  Anyway, I was pretty pleased at how close my outfit came to my original design!  I had to switch the direction of the stripes due to the stretch, but otherwise pretty spot-on! 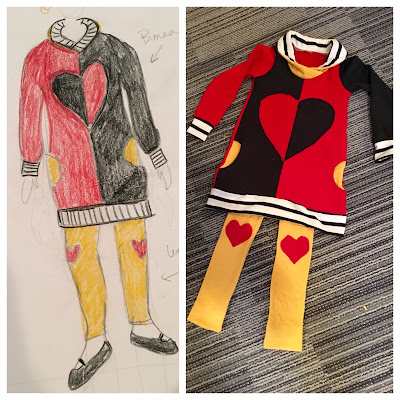 So, I found out today that Project Run and Play changed the method of determining the winner of the sew-along from being chosen by judges to random drawing.  Hmm.  I have to say, I'm not excited about that.  It's still fun to check out all of the contributors (here they are for this week's theme), but something about having a competitive aspect really inspired me to take my designs to the next level.  I love having the theme and the community to motivate me to sew and get stuff up on my blog (have totally lapsed on that lately, while I've been working on getting my business up and running), but winning (or losing) via random number generator rather than showcasing someone's skill is not very inspiring.  And I hope this doesn't mean people will just start searching their archives and uploading any old thing that might fit the theme, just to get extra entries.  [Edited:  I've been thinking about this statement more, and it's not that I really think people would try to get extra entries--it's more that I really want people to link up as much stuff as possible, because I love seeing all of the entries, regardless of skill and/or effort level, but now every entry is equal competition--I'd rather see the people who really put amazing thought into the theme be rewarded.  It was fun for me when I started sewing along with really no thought (or chance!) of winning to see what the winners were doing, and after doing it for a few years I felt ready to put in that level of effort.  I have won a couple of sew-along challenges over the years, and it felt really, really good to be recognized, and I also typically have some weeks where I'm inspired and other weeks where I phone it in because I still want to participate even if I'm not going all-out, and I tell you--if I won a drawing on a week where I didn't give it much effort, I would feel so bad to beat out the other amazing sew-along competitors!  But based on what I'm seeing, I'm feeling a little guilty that I'm sounding like it's all about winning to me--it's not, really, but as I said before the competitive aspect helps motivate me.  ANYWAY, blah blah blah!  Sorry!]  It just feels very anticlimactic to me--wah-waaahhhhhh.  And I'm not sure why the switch was made--was it so that the ladies behind PRP didn't have to worry about finding judges?  If so, I totally get it--it's a lot to organize.

Didn't there used to be voting on sewalong contestants?  That could be one way to eliminate the need for judges, although it can be unfair when some people have lots more followers than others.  What if there was a method for voting similar to the real contestants' method--that in order to vote on the sewalong, you have to upload something?  And then you can't vote for your own?  Anyway, I think it was more fun for me to have the chance to be recognized for designs, and to see what kinds of things turned out to be winners.
Posted by bethanycavanaugh@gmail.com at 10:35 AM