I have to admit, I am not much of a shorts person.  But after seeing Shorts on the Line, hosted by Rachael at Imagine Gnats for the last few years, I've been thinking it might be fun to try making some. 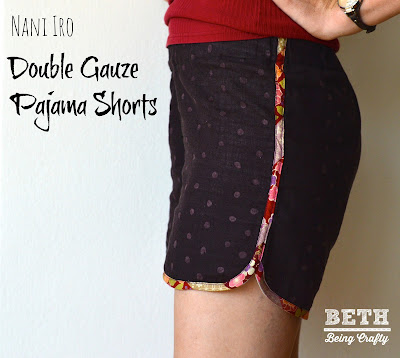 Now, these are pj's, so it's still baby steps--I'm not ready to try making shorts to be worn in public yet.  But as pajamas go, these are maybe the best I've ever had.  As a matter of fact, I made two pairs--one to try out the pattern before cutting into my Nani Iro double gauze (it's Pocho Adzuki Bean, a dark eggplant color--love it!) 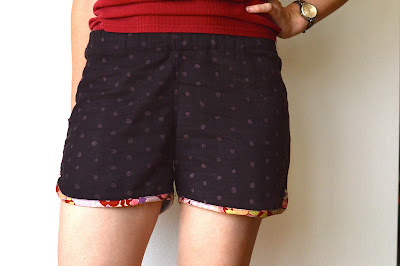 The first pair is made from double gauze printed in Japan.  I love this fun print and I have bought it in several different colors! 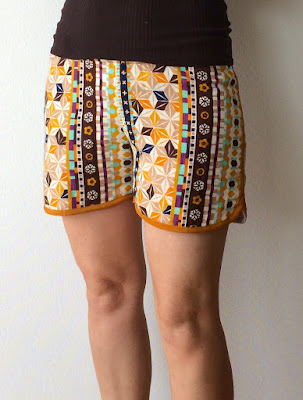 I used the free Bias Trim Shorts pattern from Melly Sews, and since I was using a woven instead of a knit, I followed her instructions from this tutorial, where she makes a pair out of a satiny fabric.  Basically I slit the pattern pieces in the middle and added another half-inch of width to both pieces.  She says to add a quarter of an inch, but I'm slightly larger than the measurements she gives for the pattern so I bumped it up a little extra.  I also added about .75 inch to the length just for the heck of it.


I made both pairs exactly the same way--I was so pleased with how the first pair came out that I didn't change a thing for the Nani Iro pair!

In addition to changing the sizing slightly, I also used single fold bias tape instead of double fold.  This was mostly for practical reasons--the bias tape I wanted to use just happened to be single fold!  For the first pair, I had a package of vintage bias tape in exactly the right color, and it was a little bit silky, not a basic cotton kind.  Nice for pajamas, right? 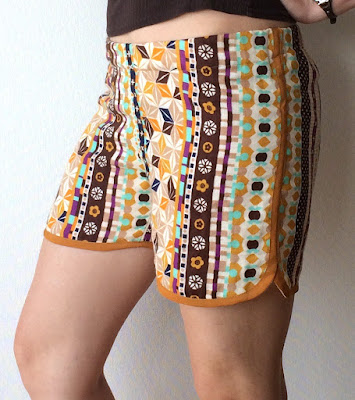 And for the second pair, I knew I wanted to use the bias tape I found at my local 100 yen store, made from traditional Japanese print fabric.  Unfortunately, it only came in 1 meter packs, and I couldn't find more than 2 packs of any one print.  The pattern calls for 3 meters, but after making the first pair I thought I might be able to fudge it, since some of the bias tape ends up hidden on the inside when you sew the side seams together. 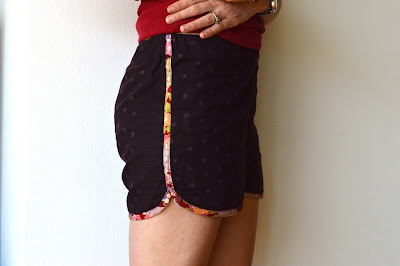 This worked great--I used exactly one meter on each side of the shorts, and was able to hide the unfinished edges on the inside.  As a matter of fact, I cut the back pattern pieces so that the exposed edge was on the selvage, so there weren't any raw edges to speak of.

The Nani Iro double gauze I used was a great deal--I found two .6 meter cuts of it for 360 yen each (about $3) since there was a little bit of a print error.  I don't know if you can tell, but some of the dots have a tiny dot of the background color on them.  I think it looks fine!

And I still have enough left to make a pair of shorts for Little Sister (although I'll have to find a different bias tape to use on hers.)  I'm actually hoping more of this bias tape will turn up, because I'd love to make a bias-trimmed tank top to go with these.

One final shot, to show how they look proportionally.  It felt weird to have a whole post with no pictures of my face!

Posted by bethanycavanaugh@gmail.com at 9:28 PM