Honestly, this year with our preparations to move overseas, I was so ready to go buy licensed merchandise for a birthday party and call it a day.  HOWEVER, my daughter, like every other girl in the known universe, is obsessed with Frozen, and therefore there is no merchandise available (at regular retail prices, that is--if you want to pay quadruple markup on Amazon, you have lots of options!).  Luckily, Frozen is a pretty good theme to DIY--even in March, when all of the snowflakes and winter scenes have long been absent from the clearance shelves.

Here are the elements we used to put together a really fun party--I'll go through them for inspiration for anyone else out there trying to put something like this together without spending an arm and a leg or too many hours of their lives!

I almost forgot to include the invitation--I was so proud of it!  I was able to put it together using PicMonkey--I love this photo-editing site so much.  Then I had them printed at Costco (5x7's are something like 30 cents each) and put them in our leftover Christmas card envelopes.  For the ice castle background I used a free download of desktop wallpaper that I found online. 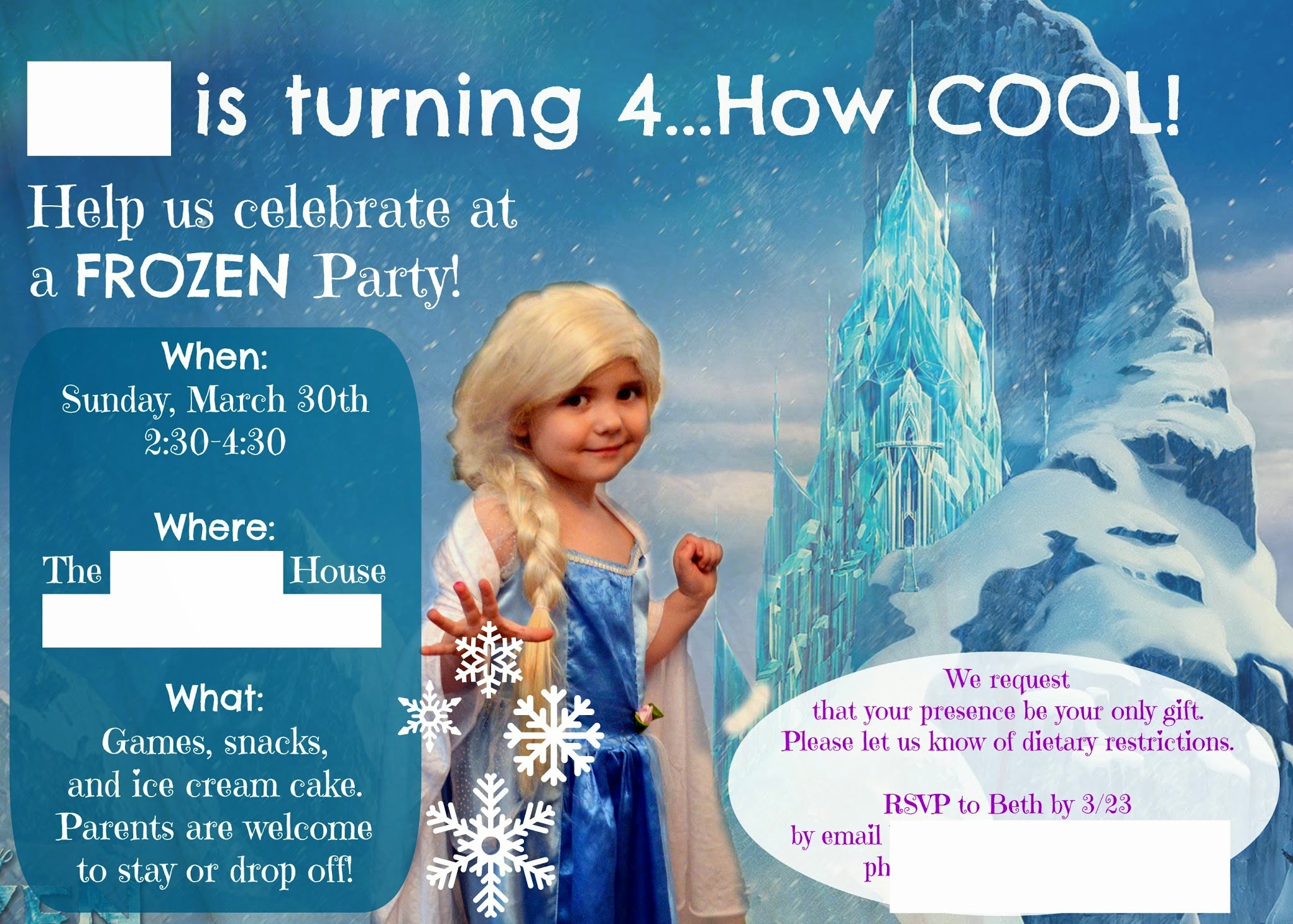 I got some hilarious feedback on the invitation--some girls displayed them in their rooms, some sisters were even fighting over who got to keep it!  Little Sister has hers pinned to the wall by her bed.


Decor:  Primarily, we used snowflakes.  The kids cut out some, and I cut out lots (what can I say; I'm faster!  And I actually love cutting out snowflakes.) 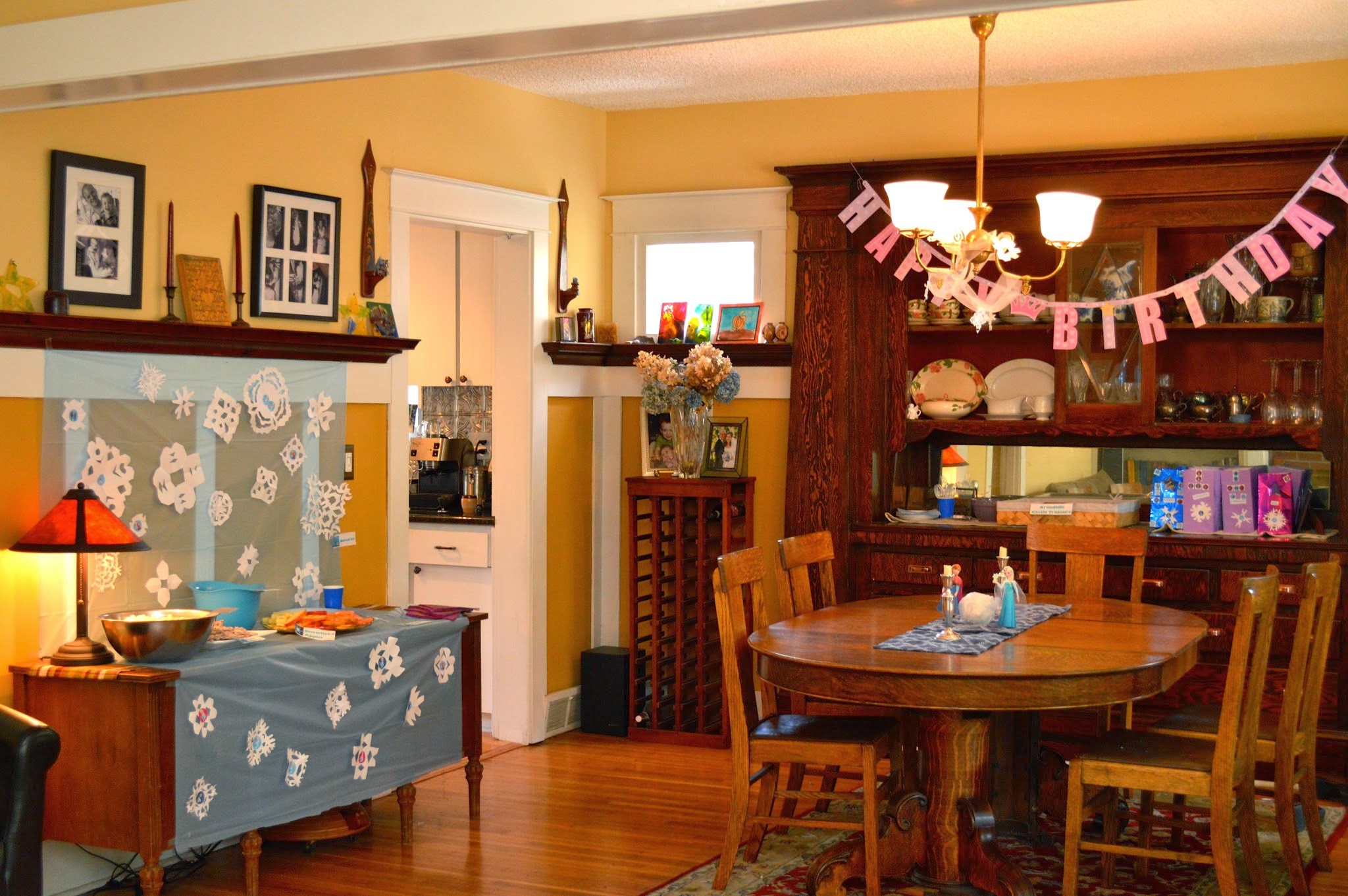 We used them to decorate our main snack table/focal point: 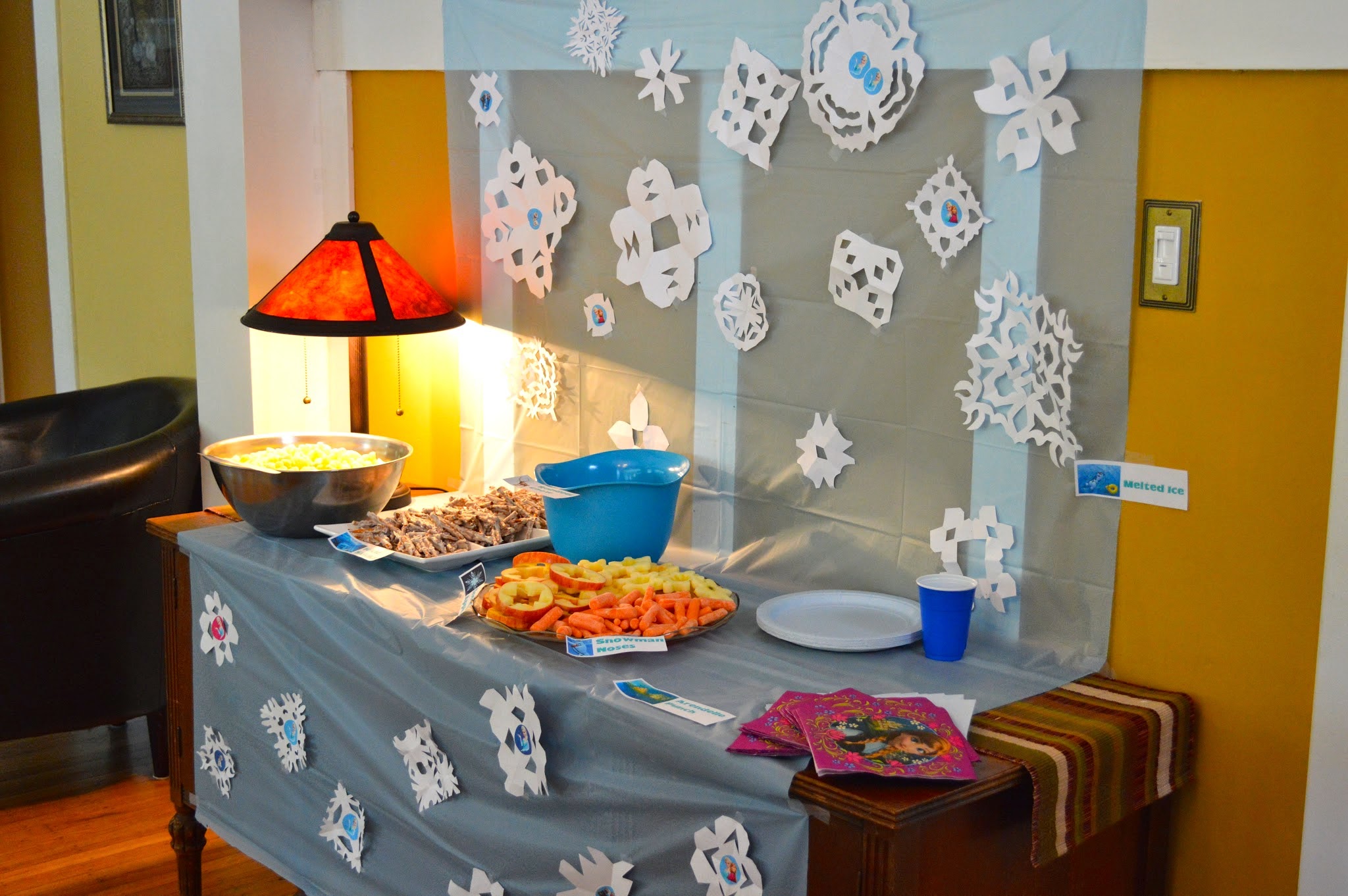 Background is a light blue plastic dollar tree tablecloth.  It was really see-through, but once the snowflakes were on it wasn't too distracting.  I also cut a piece off that was just the right size to cover our kitchen table, where we put the grown up drinks.

Some of the snowflakes were decorated with free printable Frozen images (free printable party kit available for download from Homeketeers)--I printed them on computer paper and the kids glued them down.  We used printables from this kit for other elements of the party too. 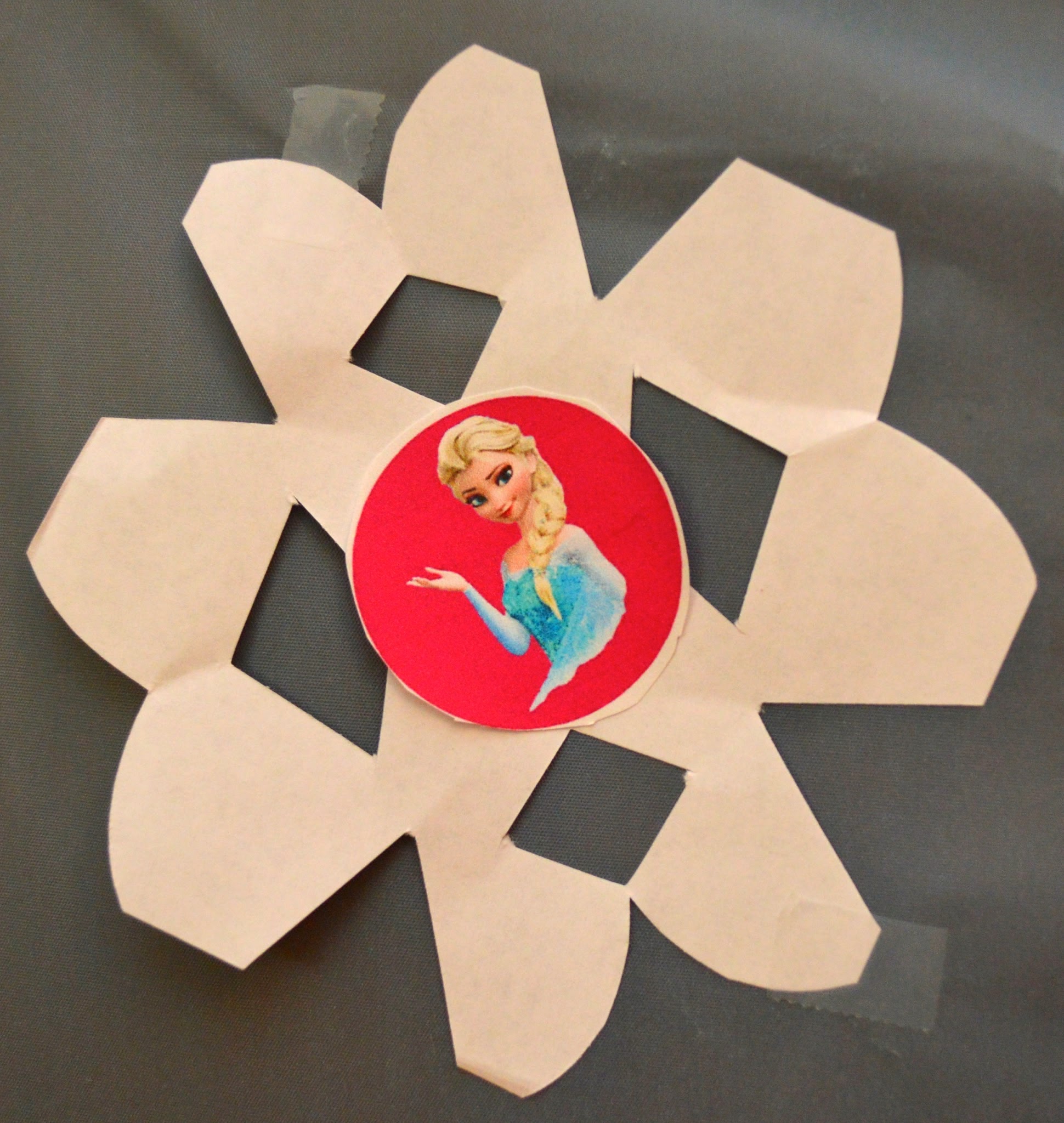 We added some tulle (an 8-yard roll from Dollar Tree, I only used a little) and more snowflakes to our dining room light, and strung some snowflakes in the window of our front door too, to add to the atmosphere: 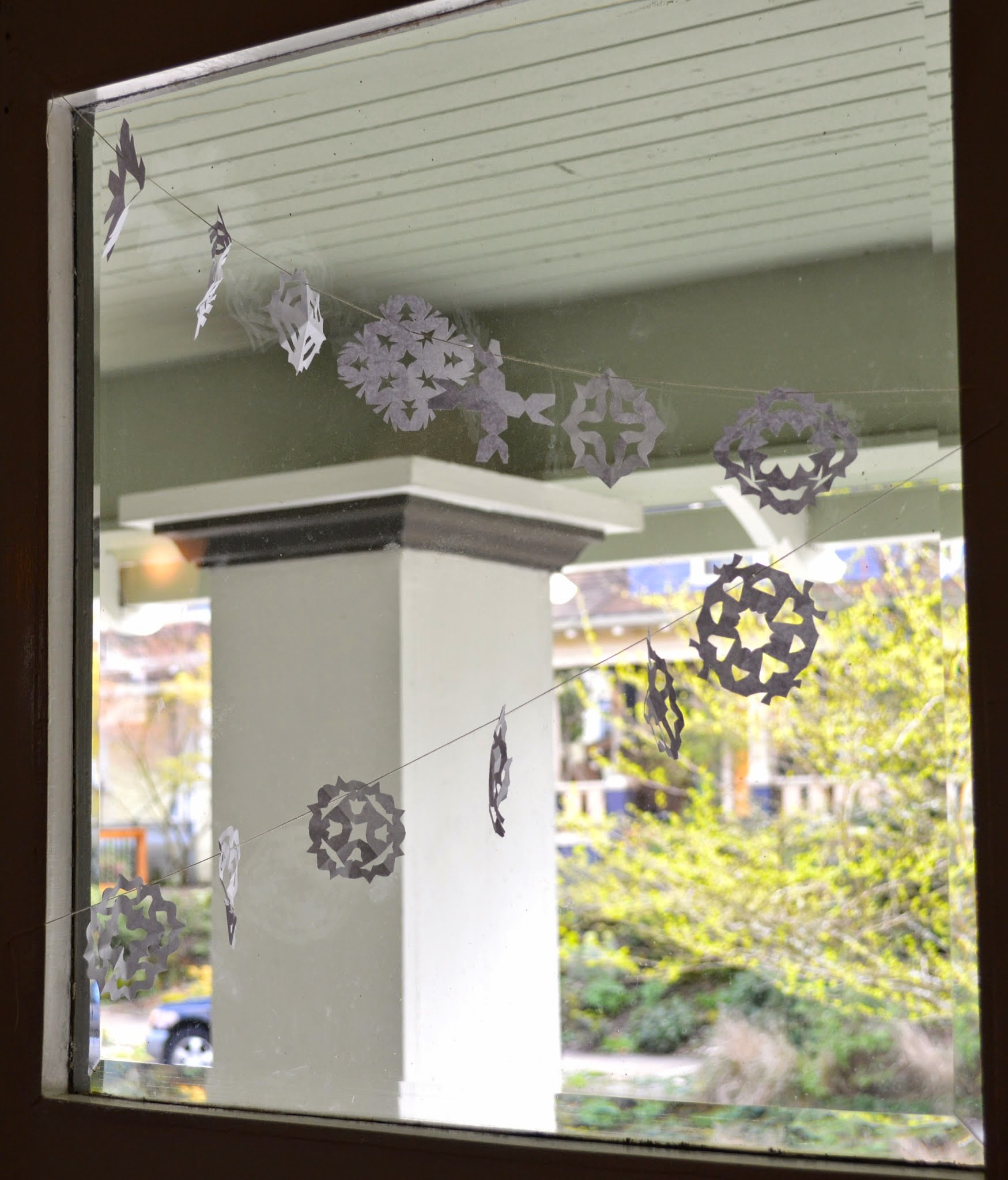 Gift Bags:  We also used snowflakes to turn our plain colored party bags (10-pack from Dollar Tree) into Frozen theme bags--Snowflake + picture of a character (or two) + name I printed out from the computer.


Our gift bags included ice-cream shaped bubbles (3/$1 at Dollar Tree), a carrot straw (5/$1 at Dollar Tree--easter seasonal stuff, or a snowman's nose?  You decide.), some glittery snowflake stickers ($2 for 30 stickers on Amazon, each kid got 6 stickers, so 40 cents per kid), a little tiara (59 cents at Party City) and a sucker that reminded me of an icicle (3/$1 at Party City, we attached the Frozen tag). The boys got a sparkly pencil (10/$1 at Dollar Tree) with a Frozen label instead of the tiara.  Oh, I also didn't buy enough of the ice cream bubbles and then they ran out, so I supplemented with bubbles in a carrot-shaped bottle--inspired by Olaf's nose.

Food:  The main course was an ice cream cake from Baskin Robbins: 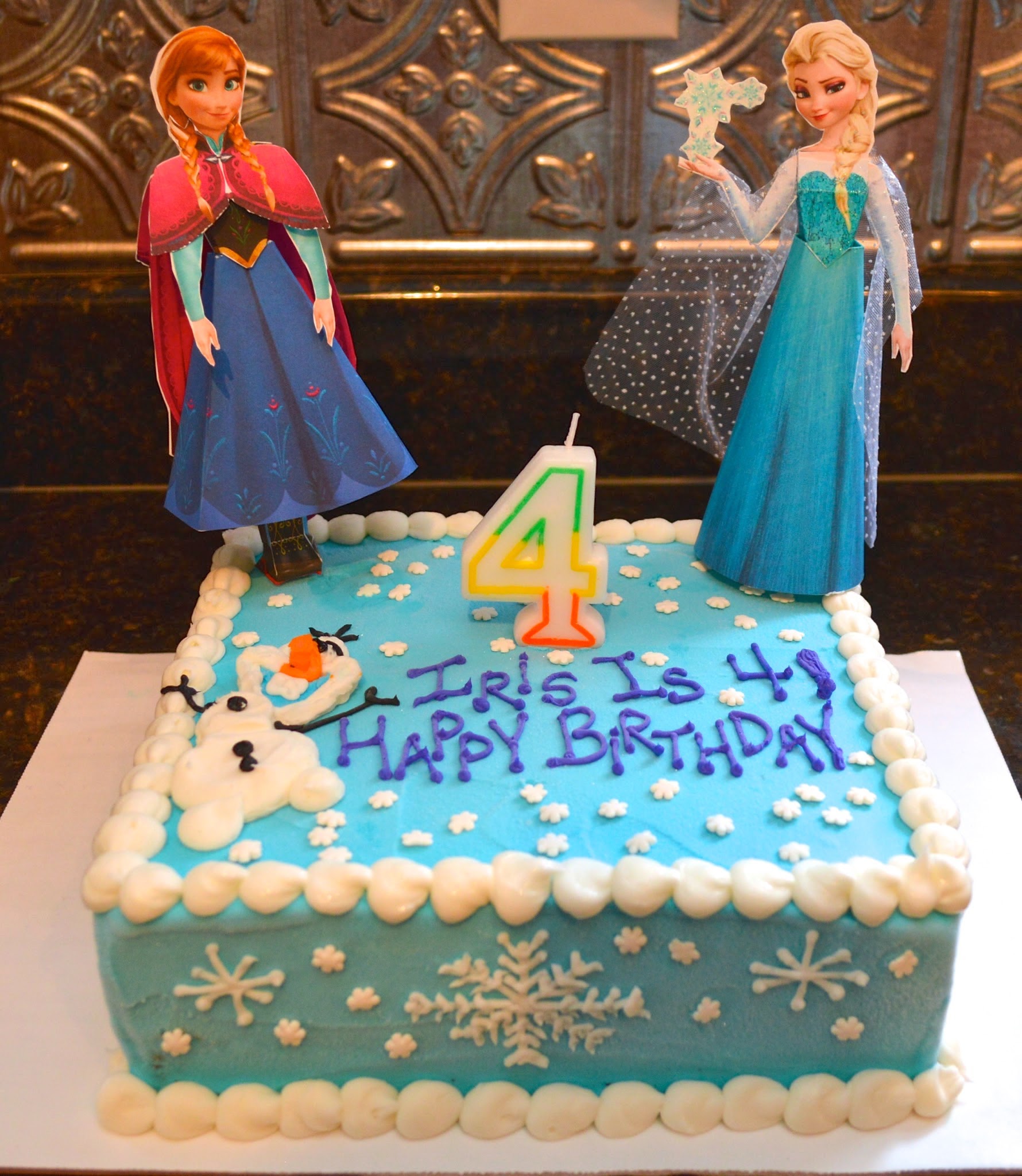 The birthday girl got to sample flavors and she chose chocolate chip mint with chocolate cake, which was yummy.  I was totally impressed with their decorations!  We provided the snowflake sprinkles and the paper Elsa and Anna, which I printed and cut from this website.  The assembly was pretty painstaking--I don't know that I would have done it in hindsight, but they did turn out cool and they were dramatic on the cake.  I stood them on bamboo skewers--make sure not to put them too close to the candle!

For our other snacks, we had 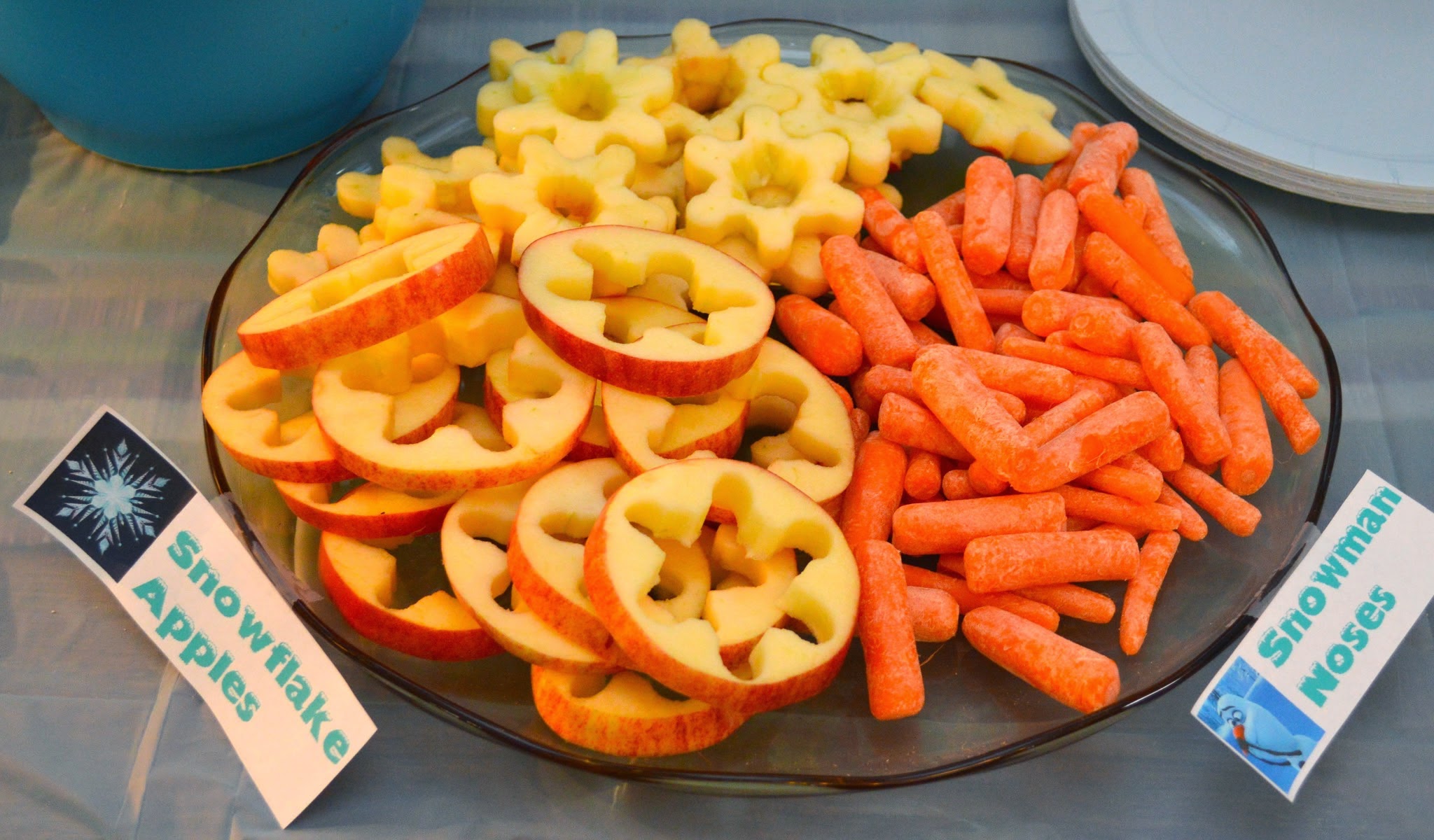 Snowman Noses (baby carrots) and Snowflake Apples (sliced into circles then cut with a cookie cutter--this was the one snack that was more labor-intensive than it should have been, but they were a big hit). 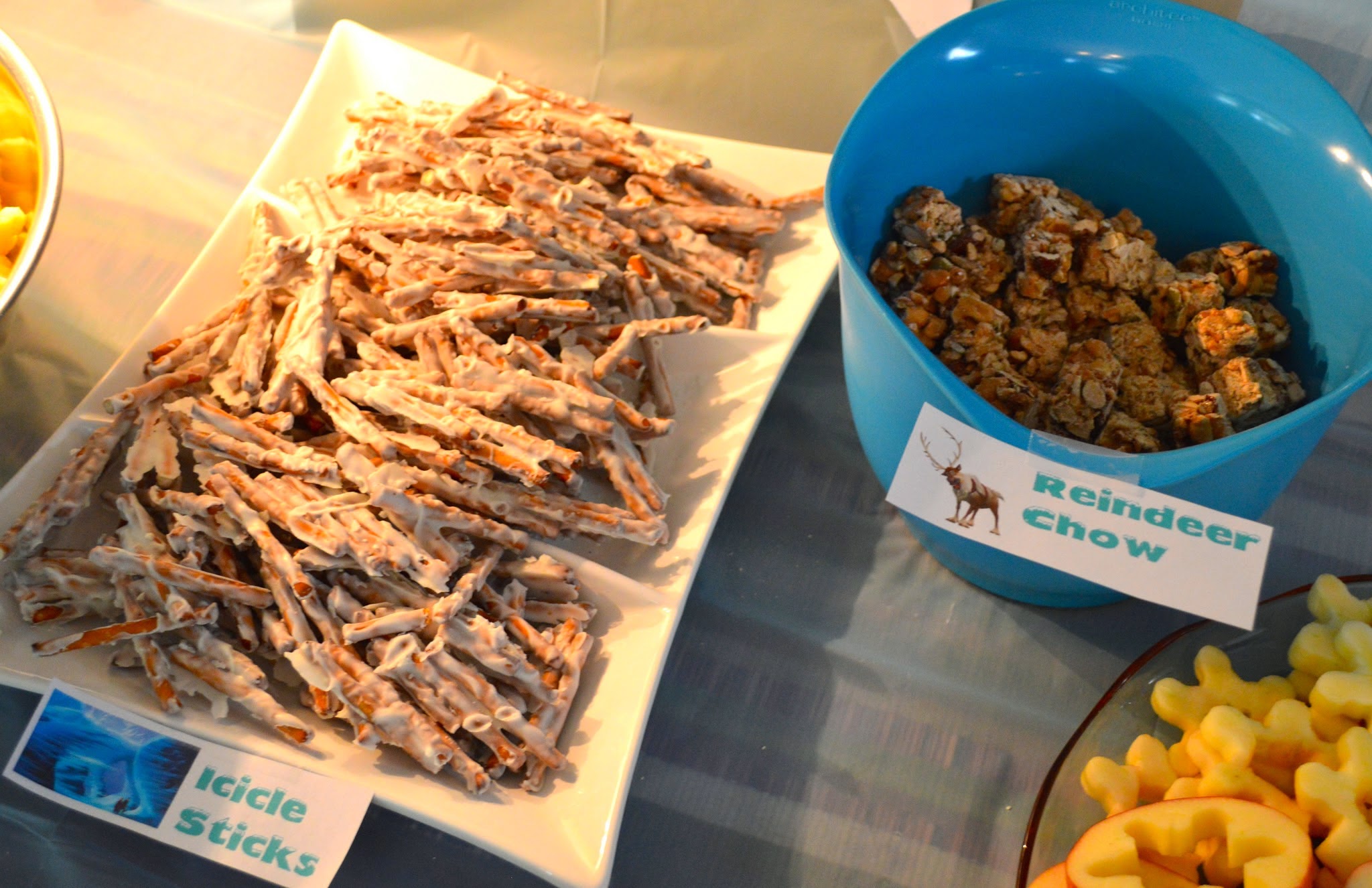 
We labeled the water bottles "Melted Ice" and our juice boxes were "Arendelle Punch."  I used the free printable straw tags from this free Frozen Printable Party Pack and wrote the kids' names on them to keep boxes from getting mixed up.

I made labels for all of the foods using images I found online--the kids got a kick out of looking at all the pictures.

And finally, our activities:

I printed out a bunch of Frozen coloring pages for the kids to do as everyone was arriving--the girls were totally into it.  Don't know how that would have gone over at a boy party, but MY boy was into it.  At least the pictures of Olaf.  And I don't know what I was thinking printing out equal numbers of both Anna and Elsa--I had to print extra Elsas twice to keep the peace.  Coloring happened again at the end of the party as people were leaving. 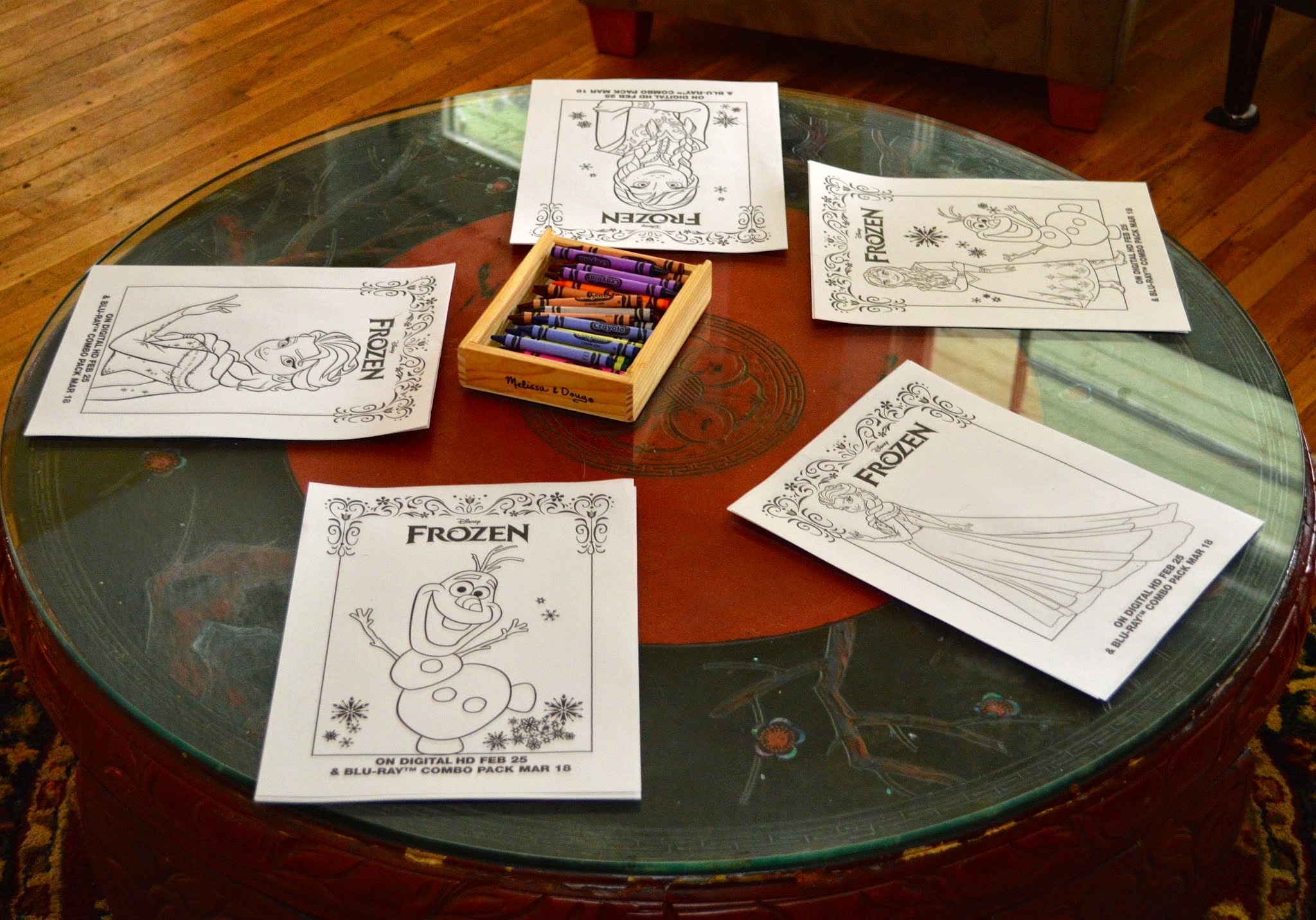 We played Pin the Nose on Olaf (pretty self-explanatory): 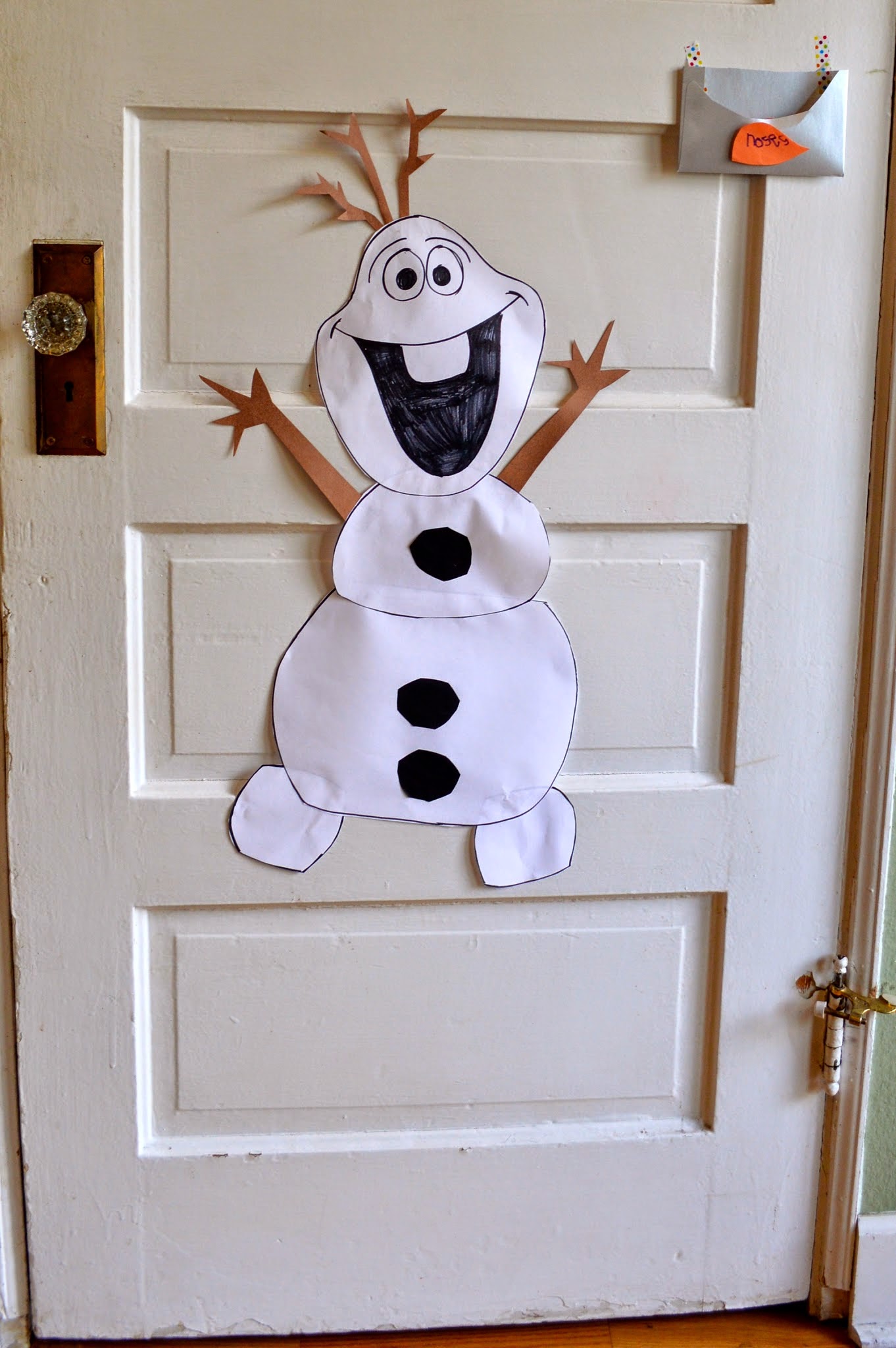 an Icecube balancing game (each kid had a partner and a spoon, I gave one partner an ice cube and they had to walk it to their partner, transfer it, and the partner came back the other way.) 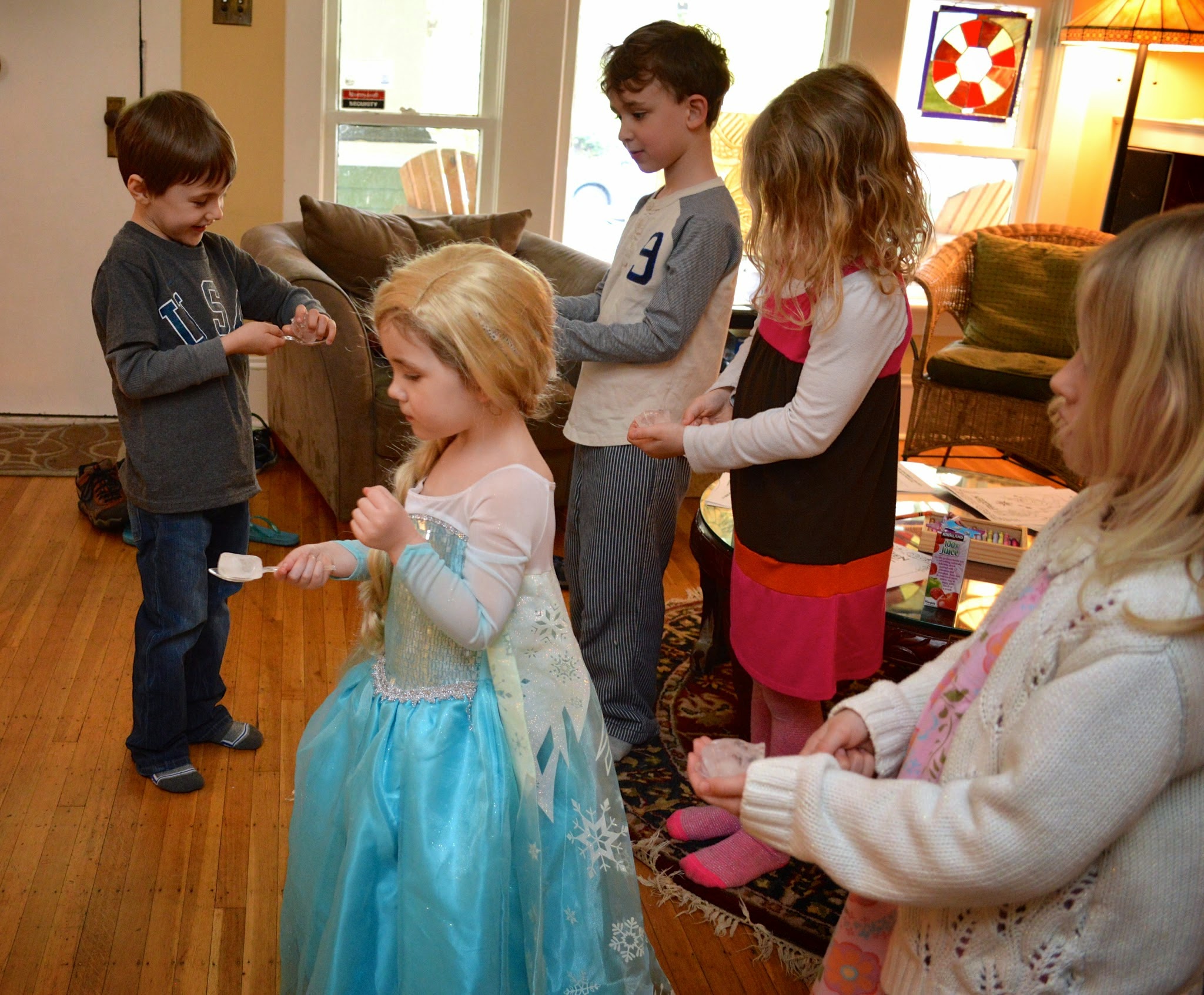 I liked it, and it was really cute to see the concentration on the kids' faces, but it wasn't the kid favorite.  Maybe with an outdoor party this would have worked better, but it was really rainy and soggy here that day.

And Cold Snowball, our version of Hot Potato.


What worked out really well was that we were using the Frozen soundtrack for the music (obviously), and as kids got "out" of the game, they joined a sing/dance-along to the music while the other kids finished the game.  We ended up adding another round of JUST sing and dance-along at the end. 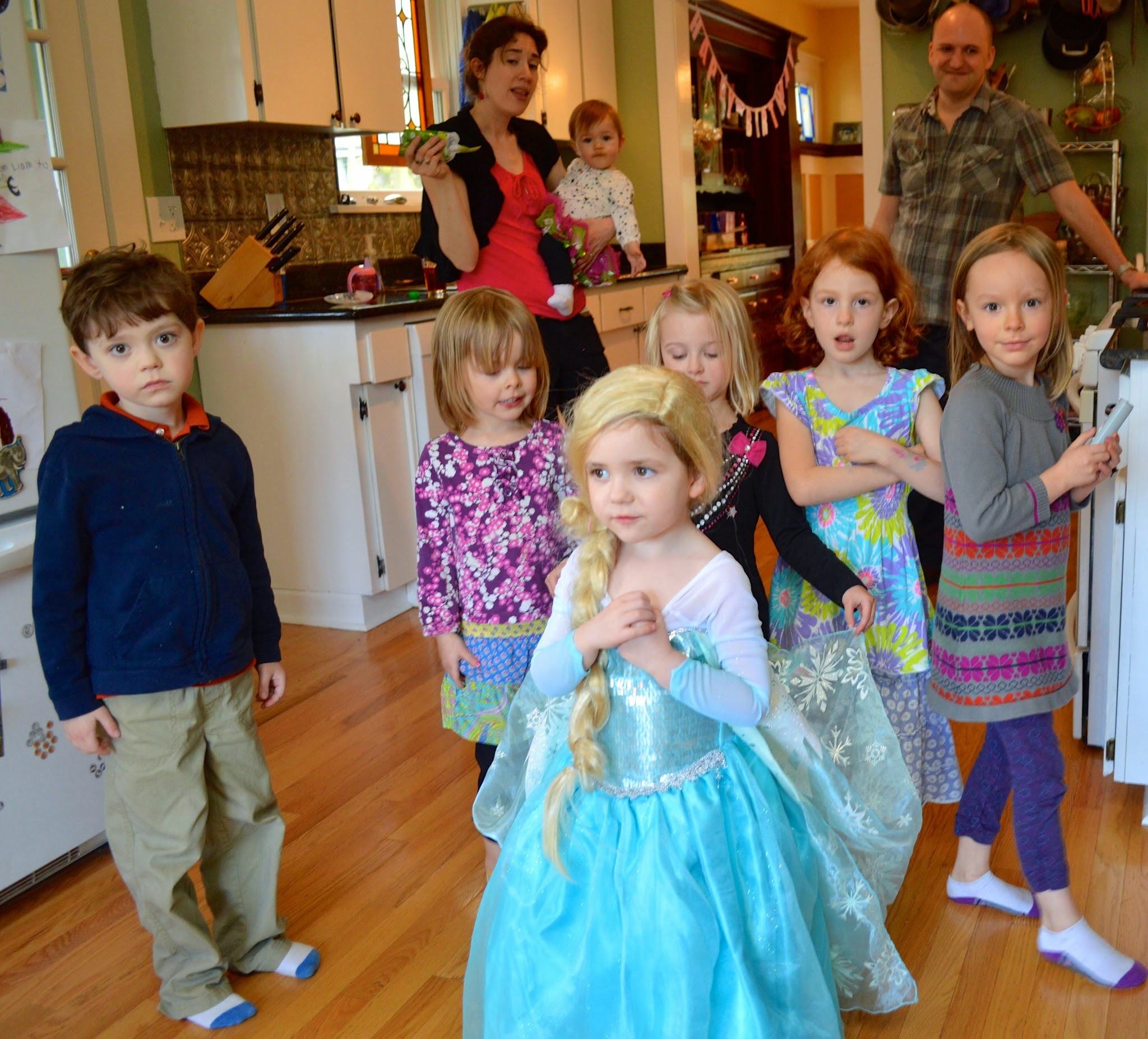 I also had a bunch of white balloons that I was planning to blow up to play "keep your snowball off the ground" in the backyard, but it was too muddy.  Particularly when the guest of honor had this outfit to keep clean:


We had so much fun, and Little Sister was totally delighted when the girls called her Elsa when she arrived at school this week.  None of the preparation I did felt like too much to me--it was all pretty simple and affordable, and I was having fun doing it, and the kids enjoyed it, so it was a win.  I know they would have enjoyed themselves even without the food labels and theme activities etc, but I get a kick out of coming up with that stuff in a manageable way, so we went for it.


Posted by bethanycavanaugh@gmail.com at 2:25 PM