The kids and I were all productive.

I FINALLY finished the stockings I have been planning since I got Christmas sweaters for 75% off at Goodwill after the holiday last year,


And many forts and bear caves were built. 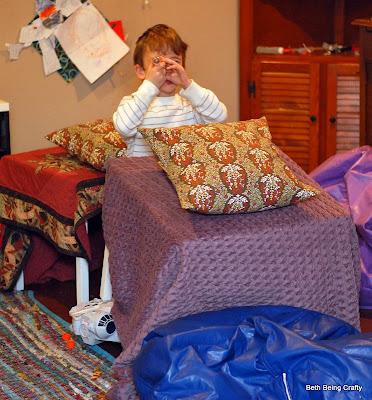 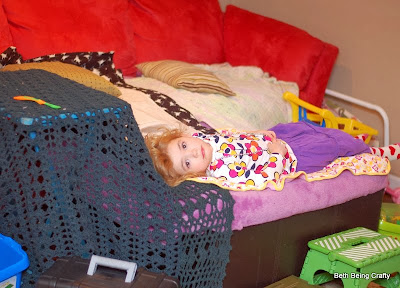 There are lots of stocking tutorials online, and I did get some inspiration there but ultimately ended up doing this my own way, as usual.  Since I made four of them in a row, by the time I was about to start the fourth one I thought I probably had enough information and expertise to do a tutorial.  So if you want to make stockings like this, read on!

Or if you  just want a better look at the end product, here you go: 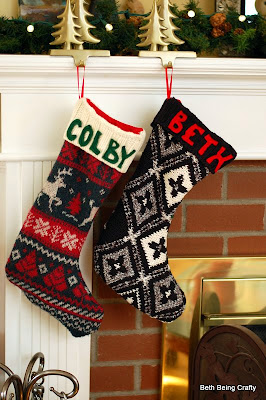 The Boy was primarily excited about the new stockings because that meant he could take his old one up to his room for Christmas decorations.  I hope he realizes that he does not have a chimney in his room, meaning that Santa will not be filling up his secondary stocking.  Honestly though, he just loves the holiday decorations and wants to spread the cheer into his bedroom--he asked me if he could bring some of the nutcrackers up there too; they are his favorite.

I had not anticipated how much more fun Christmas would be this year.  Our kids are now 3.5 and almost 6 and there is a huge difference between how a two-year old reacts to the holidays and how it is for a three year old.  Little Sister is SO EXCITED!  About EVERYTHING!  And it's not even about the presents--she is asking Santa for a Rapunzel doll, but other than that she told me that she doesn't want anything.  I asked her if her family should just choose something that they think she would like, since they know her pretty well, and she said "Yeah!"  She is way more interested in dancing in front of the lights, playing I-Spy with ornaments on the tree, and singing Christmas songs.  And The Boy had an opportunity to "shop" for his family at school, choosing presents carefully for all of us (nothing costing more than $1.)  He can't wait for us to see what he chose, and he was so thoughtful about it!  He has been making snowflake garlands and pictures of reindeer to put up around the house, and he can't stop talking about playing The Angel Gabriel in the annual church Christmas play. It is fantastic.

My personal favorite decoration--when he saw me about to recycle the scotch tape wrapping, he said "Don't throw that out!  I can use it to make Santa's sleigh!"  And so he can.

Alright!  Ready for the stocking tutorial?  Great!  These is such a Beth project:  Upcycled?  Check!  Clearance? Check! Figuring it out as I go?  Check!

You can easily find a printable stocking pattern online, but I just used our old stockings as a guide for cutting out my shape.  I had to be strategic about where to cut, since most of my sweaters were cardigans or had zip-fronts.  It's a lot more straightforward if you find a crewneck to start with.

I cut two main stocking pieces (one facing each direction for front and back), two lining pieces, and two cuff pieces cut from the hem of the sweater so it has a finished edge.  I then cut my letters out of felt and sewed them to the cuff piece that would be the front of the stocking. 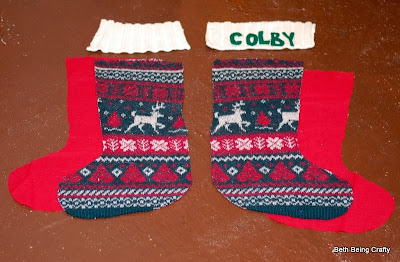 Attach the letters towards the bottom of the cuff piece, close to the finished edge. 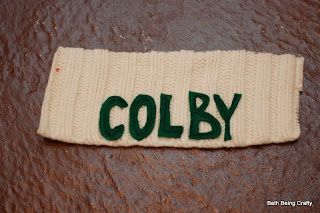 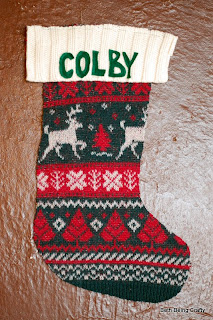 Do the same with the back piece and blank cuff. 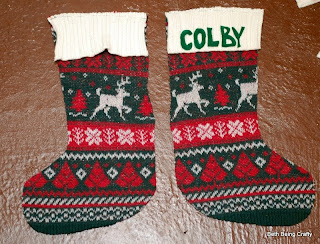 Now lay your lining panels on top of the stocking pieces, right sides together, and sew across the top of the cuff.

Flip the lining pieces up and lay flat, 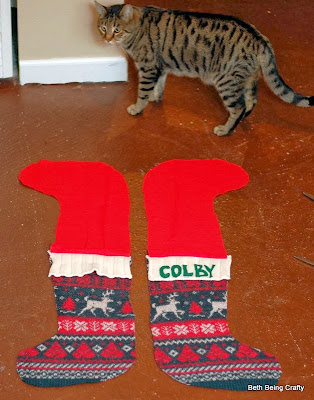 Then lay one on top of the other, right sides together, and pin. 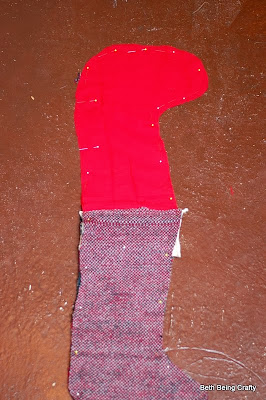 Leave an opening in the lining between the heel and the top of the stocking. 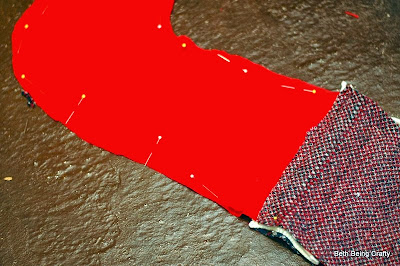 Before sewing, make a little loop for hanging.  I used ribbon and tied a knot in one end. 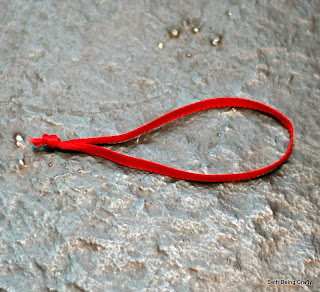 Insert the loop with the loop tucked in towards the middle of the stocking, close to the top of the cuff. 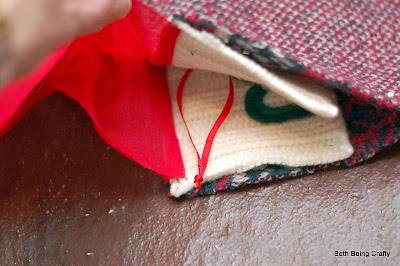 Pin the loop in place so that you will sew the knot or raw edges into the seam. 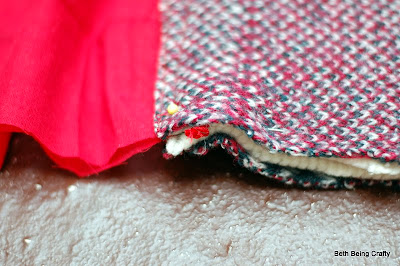 Sew around the outside of the stocking and lining, leaving the gap to turn the stocking right-side out.  Trim the edges, being careful not to get too close to the seam.  This is especially important for the sweater portion, since a cut sweater edge can unravel if not handled carefully. 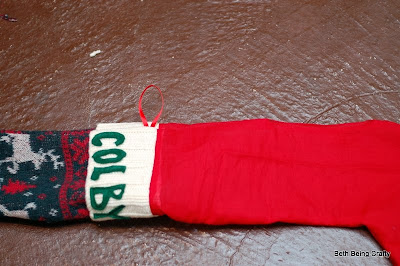 To close up the hole used for turning, I just sewed it shut on my machine, but if you'd like it to be invisible you can do it by hand.  I just thought that nobody would see the lining so it didn't matter. 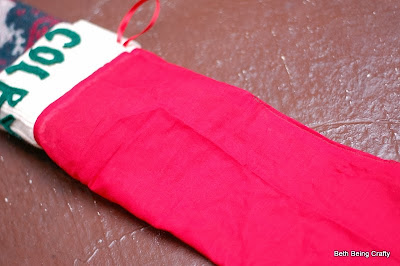 You could be done here, but depending on the thickness of your sweater/cuff, the lining may stick out.  This bugged me, so I decided to do a topstitch around the opening to tuck the lining down inside the stocking.


Here's how they look on the mantle!  The pets didn't get new stockings. 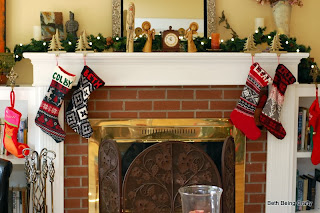 And luckily, each member of the family chose their own stocking as their favorite.  Phew!
Posted by bethanycavanaugh@gmail.com at 9:29 PM