Whooee--it's been over a week since I posted! Sorry about that!  I've got lots of projects to show you, but I just keep making them and not blogging them.  I may have to skip doing tutorials for a bit so that I can just get some stuff up here.  That said, I will throw in a few tips for making these big boy pj's: 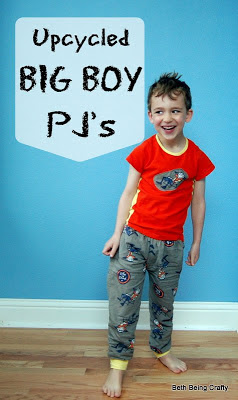 The sudden onset of summer weather made me realize that the boy only had 2 sets of short-sleeved pj's. I had to pass on all of his 5T shorts sets from last year when I realized that they were sort of like sausage casings when he squeezed into them.  But it's harder to find pj sets bigger than 5T--AND when you do, they cost double!  So it was time to try my hand at making some.

I had an old pair of men's pj pants that my dad had passed on, so that was my starting point.  I loved the idea of these cuffed pj pants from Behind the Hedgerow. I used a pair of slim-fitting knit pj pants for my template, but widened the legs by about  1.5 inches (cut on the fold, so 3" total).  Then I cut them off a smidge shorter and added cuffs made from fabric cut from an old t-shirt.  For the waistband, I used this time-saving method of adding elastic without making a real casing.  It was pretty cool!  But I felt like it looked a little bunchy for pants (it's meant for skirts), so I did end up adding a seam at the bottom of the elastic as well and I like it better. 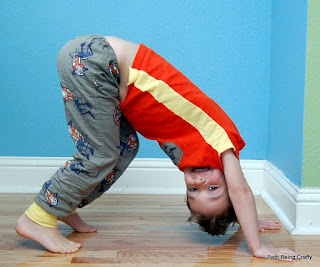 For the top, I used his slim-fitting pj top as a template to cut out a shirt from an old tee of mine.  I had used it before as a paint shirt, so there were some splatters on it, but it was the only one I had that matched the colors in the printed pants!  I had planned on adding some appliques from the leftover fabric anyway--I just had to be careful of my placement so I could cover the worst of the splatters.


Here's a good tutorial from MADE on making a kid's tee--if you're upcycling then cut the body and sleeve pieces so that you can reuse the original hem on the shirt and sleeve and save yourself some time!  PJ shirts are typically cut a little slimmer,so keep that in mind. Also, if you're upcycling a tee that has a ribbed neckline, like I was, you can cut off the rib knit right above the seam and use that for your new ribbing.  It will end up a little smaller than the original ribbed binding, but then you don't have to measure, cut, fold, and iron a piece of rib knit for your neckline. Another time and money-saving win for upcycling!

One problem--the knit in his pj top was thinner and stretchier than the tee that I was cutting up, so the top ended up tooooo small.

So, I cut out the side seam all the way up the sleeve and side of the shirt, and added a strip of the same fabric I had used for the cuffs and binding the neckline. Now it fits perfectly, and I think the racing stripe is kind of cool.  Might do it on purpose in the future!

Posted by bethanycavanaugh@gmail.com at 12:39 PM