Ok, this isn't so much me being crafty, but there are PROJECTS that have been ACCOMPLISHED, some with at least my input and most completed while I was wrangling the kids and keeping out of the way, and even a few coats of paint that I applied myself.  I have been waiting and waiting to share pictures until everything is finished and perfect (not to mention tidy and organized) and I have realized that that day may not come for a long, long while (I refuse to say never).  So, I have pictures to show of what we have done to our house!  These pics go waaaaay back--some of this is stuff we did before we even moved in two and a half years ago, but the big deal is the upstairs renovation that we have been working on for the last year and have finally gotten to a point where we can live with it, and the contractor is no longer coming to our house, and the rest of the projects are finishing work that we can (when we get the time and energy) do ourselves (and with the free labor of those who love us and want the best for us--yes, I mean YOU!)

So, without further ado, OUR HOUSE!


I'll do a quick tour of the main floor-that's where we did most of the work before we moved in--before moving on to the monster project that was our upstairs renovation.


Most of the "before" pictures were taken before the previous owners moved out.  We ended up buying it before it went on the market, so these are just some shots their realtor had snapped to show her colleagues.  So sometimes I don't have great angles for comparisons, but I did my best!  In the living and dining rooms, we pretty much just painted.


The kitchen was our biggest pre-move project--floors, counters, some new appliances, backsplash. 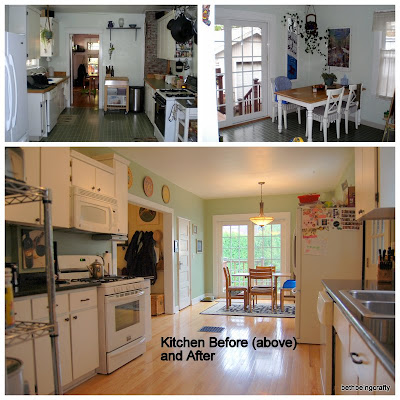 We painted our kitchen the same color green as the outside of the house.  (Clary Sage from Sherwin Williams, if you're curious). 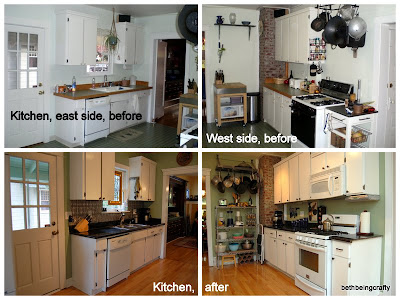 We've still got some more work to do in the bathroom--intending to install crown molding and need to replace the floors.


A quick peek at the basement--we painted, and eventually took out the carpet and painted the concrete floor.  The basement is the site of our next major project, which the husband speaks of as though it will be happening sometime before my children are in high school.  I am not so sure.


There is a play area in the basement too, as well as my sewing area.  I'm not showing it to you.  It's served as extra storage and staging area during the renovation, and it's still just embarrassing.  Just imagine a lovely open area with a train table and perfectly organized toy bins, and a sparkling sewing machine with labeled bins and folded color coded fabrics, and that's pretty much what's over there.  You'll just have to take my word for it.

Moving back to upstairs--the stairs themselves were a huge portion of this most recent project. 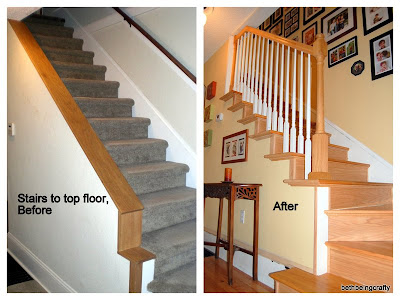 I am LOVING all the space to hang family photos!  Sure, I could have hung some before, but it was a bit awkward with the divided wall, and we also pushed back the wall over the end of the stairs so you don't hit your head coming up, which opened up the area and made the pictures easier to look at. 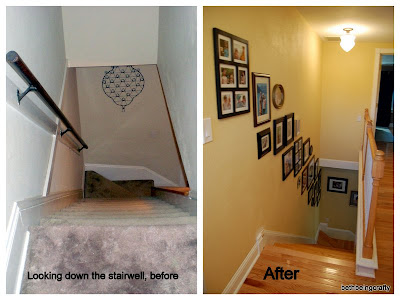 We put a hallway through the original master bedroom, allowing us to open up the landing/upstairs.  It feels so much brighter and more open up there now!


We stole some of the square footage from this room in order to give the master suite a good sized walk-in closet.  MUAH HA HA HA HA.  The funny thing is, it actually looks bigger now.


The original master suite became Little Sister's new room.  We put a new wall in this room in order to create the open hallway you saw before.


Previously, you had to walk through the master suite to get to a sitting area, which had doors to a small master closet and a bathroom.  The sitting room was being used as a master closet extension. 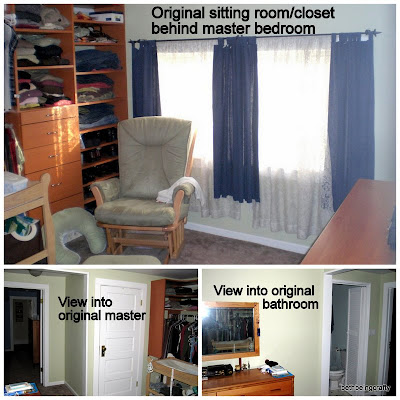 When we moved into the house, I was 8 months pregnant with Little Sister.  The sitting room made a perfect little nursery for her.


But even then we knew that it was not a long-term solution.  Having to walk through mom and dad's room to get to the stairs is great for a baby--not so great when she gets older.  So the main part of the project was figuring out how to maximize the space in the sitting room to turn it into a master suite.  We talked to a few people about doing a dormer, but it was not in the budget.  So we got creative with our contractor, and were able to turn an 8x10 sitting room into a 12 x 14 master bedroom!


The footprint of the bathroom stayed the same, but it's probably one of the most impactful changes in the space. 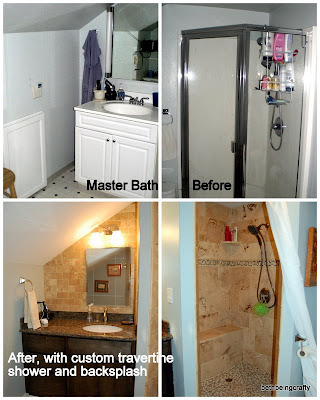 I love the color in here.  It's a little hard to see in the pictures, but it's Behr Rocky Mountain Sky, kind of a grey-blue.  Very peaceful. 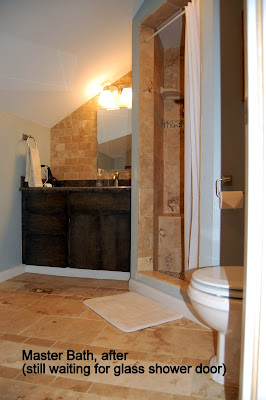 I mean.  It feels so luxurious now.  I LOVE it.

We didn't have room for two sinks in there, so...

Oh, and look!  I finally have a place to hang the awesome jewelry display my lovely friend Jill made for my birthday almost a year ago!  It's been tucked into a closet, waiting for its moment to shine.  And I must say--now that my jewelry is out where I can see it, I have been actually wearing it!  I'd pretty much been wearing the same necklace (maybe two) and pair of earrings for the last year, but now that I have all of my choices at my fingertips when I'm getting ready in the morning, I have been making good use of them.

The rest of the closet isn't finished yet (it's just an empty room with a dresser, and my clothes in a bunch of suitcases.  But man, you guys!  We are getting there!
Posted by bethanycavanaugh@gmail.com at 2:13 PM