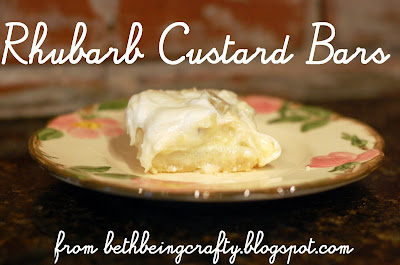 These bars are my favorite summer treat. I started making them when my mother-in-law supplied me with rhubarb from her garden, and they quickly became a staple.  Every time that I bring them somewhere, people ask me for the recipe--or, they just ask me to bring them again next time.

There are three main components to this dessert:

I mean, how can you go wrong?  And despite having three distinct parts, they really come together very easily.  You do have to plan ahead a bit, because the crust/custard have to come to room temp before you put on the topping, and then the whole thing should chill for an hour or so before serving, but actually making them is pretty simple.  Believe me, because I do not go in for complicated desserts--why should I, when there are so many easy ones that are fabulous?

These are adapted (barely) from a couple of different recipes.  I don't remember where I found the original one, but when I found another version from Cooking Light, I mixed and matched the lightened version and the original to come up with something in-between that worked for me.  My main complaint with the Cooking Light version was that it used Cool Whip, whereas I require real whipped cream for most things in life.  But I did like that it cut down on the butter without really changing the crust, and that it used lightened cream cheese and milk in the other parts of the recipe.

Topping:
1/2 cup sugar
1 cup (8 oz) reduced fat cream cheese (1 block)
1/2 tsp vanilla extract
Whipping cream (about 1/2 cup in liquid form, it will be about 1 cup once you whip it--and a little extra never hurt this recipe), with about a tsp of vanilla and a tablespoon of powdered sugar

Crust:  Combine 1 1/2 cups flour, 1/2 cup sugar, and salt in a bowl.  Cut in butter with a pastry knife or two knives until mixture resembles course meal.  You can also do this with a food processor if you think that washing a food processor is less work than cutting in butter--I go back and forth on that one.  Press mixture into a buttered (or cooking-sprayed) 9"x13" pan and bake at 350 for 15 minutes or until crust is golden.

Filling:  While the crust is baking, wash and chop your rhubarb.  Then combine 1/3 cup flour and 1 1/2 cups sugar in a large bowl; add milk and eggs, stirring with a whisk until well blended.  Stir in rhubarb.  Pour mixture over baked crust.  Bake at 350 for 40 minutes or until set.  Cool to room temperature.

Topping:  Whip your cream with a little vanilla and powdered sugar to taste.  You can do with a mixer, or I like to use my co-2 whipped cream canister (pictured below).  Can I take a minute to tell you how much I love this thing?  I just fill it with a pint of whipping cream, a spoonful of powdered sugar, and a teaspoon of vanilla, screw on the top, shake it up, put in the co-2 cartridge, shake it again, and I have the most beautiful whipped cream.  Then I just squirt out a cup's worth (or a bit more) when I'm ready for it in the recipe, and I have more whipped cream leftover for whatever I want.  Okay, sidetrack over.  Back to the recipe.  Place 1/2 cup sugar, cream cheese, and vanilla in a bowl, beat with mixer at medium speed until smooth.  Gently fold in whipped cream; spread evenly over baked and cooled custard.

Cover and chill for at least an hour.  Cut into squares.  Devour.

So of course, the last time I made these, I decided I had to have a cute little insulated carrier of my own to tote them to book club.  Have I mentioned how much I love coordinating prints? 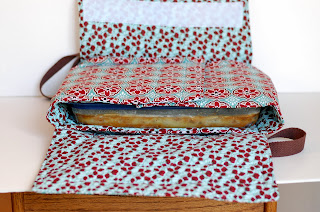 The only thing I did differently than the tutorial for this carrier was to only sew the two panels together on the short sides, leaving the long sides open in case I wanted to slip an ice pack or heated rice bags in there to add to the insulating properties of the Insul-Brite lining.  Genius, no?  Hmmm, maybe it would be even more genius to sew one of those long sides down and add a little velcro to the open side, so the heating/cooling element wouldn't slip out...something to think about.  I'm always thinking.

Posted by bethanycavanaugh@gmail.com at 3:12 PM