It all started when we were shopping for a bigger bike for The Boy.  If you've tried to buy a nice boys' bike on Craigslist, you probably will have noticed as you click through the listings that for every one good boys bike, there are five girls bikes in better condition.  Not too surprising, I guess--and it bodes well for the future when we are looking for used bikes for Little Sister.  But every time a photo popped up of a purple bike, Little Sister went crazy.  "I want a pupple bike!  I need a pupple bike!"   This soon extended into real life--we live on a busy bike lane, and every time a purple bike went by, Sis would point and shout, "Yook!  A pupple bike!"

Not pupple.  Not even purple.

So we decided that it was only fair if Little Sister was going to have to use her brother's old things (just wait, kid!), then we might as well spruce them up for her and give them a new life and new look.  Which brings me to.... 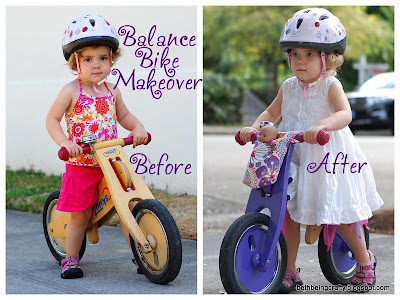 You may not be able to tell from the picture above, but this bike had seen better days.  The seat was worn, the tires were rusty, the wood was scraped and dinged.


It was due for this makeover.

Little Sister came to the store with me and picked out her color of spray paint, and we also got a can of enamel to keep it from scratching too easily.  We used Rust-oleum Painter's Touch with Extra Cover in Gloss Grape, and Krylon Crystal Clear Indoor/Outdoor Protective, Non-Yellowing Clear Finish, in case you're curious.

My hubby took the bike apart, which was not too hard to do, and gave it a light sanding before spraying with the purple.

He also removed the rust from the wheels with steel wool and taped them before spraying the inside of the wheels as well.  He gave each piece two coats just to be safe--your own results may vary.  Once those were dry, he put on the clear coat and let it sit for the rest of the day (so about 5-6 hours) before reassembling the bike.

In the meantime, I made a new seat cover and bike bucket so that the whole thing was looking brand spanking new!

For the seat cover, I traced the seat on a piece of paper and cut out a fabric oval that would wrap around it. 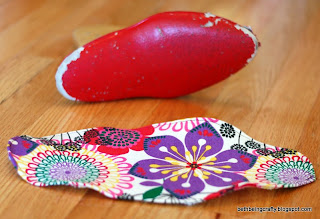 I used an outdoor canvas fabric, but I wasn't willing to spring for oilcloth.  I figured I would be more motivated to keep it inside and under cover this time around, so it should be better protected from the elements!  I ironed on a piece of fusible fleece that was the same size, then I did a tiny folded-over hem.  I would say you could skip this step--I think that with the fusible fleece it wasn't really going to fray anyway.


I just used my staple gun to fit the seat cover right over the old seat.

It definitely needed a bike bucket to show off more of that cute fabric, so I made a quick one.  It is not as functional as I would like, but I got to try again because what do you think her big brother said when he saw that Little Sister had a bike bucket?  Oh yes, I got to make one for him too.  I'll do a tutorial on that one because I think it turned out pretty great!  Here's a preview:

I may re-make hers in the same way, although her straps will need to be different, since the skuut doesn't have a center bar.  ANYway.

As is, it works for toting around one very tiny baby.  Or today's passenger, a circa-1982 wooden unicorn.  I can kind of squeeze a water bottle in there, which was the intended purpose, but Little Sister prefers to bring a friend anyway. 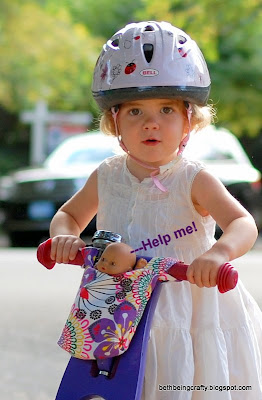 Anyway, isn't it cute?  And she's big enough to ride it with the body right-side up now! 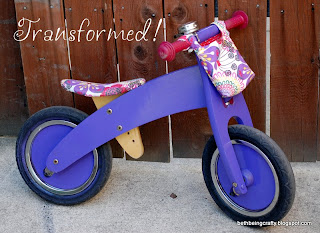 Posted by bethanycavanaugh@gmail.com at 3:24 PM