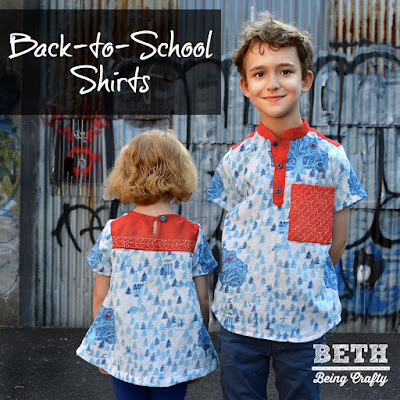 This month's Project Run and Play theme was handwork, something I typically don't do.  BUT one of the last things I did before leaving Tokyo was to sign up for a sashiko embroidery class.  It was such a fun experience--a friend and I did it together, and it really felt like sitting in on a sewing circle with several Japanese ladies.  Most of the people in the class were repeat customers, bringing their ongoing projects back to work on them with some company.  I started a great embroidered panel (that I've since finished; not sure what I'm going to do with it yet!) while getting tips on the technique from the woman teaching the class.

Those of you in Tokyo, I recommend it--the class is on the first Thursday of the month at the Blue and White Store in Azabu-Juban!

In any case, my new sashiko skills were fresh in my mind when the ladies behind Frances Suzanne posted their challenge for Project Run and Play this month.  So while a couple of months ago I probably would have passed on this one, I actually had some excellent inspiration. 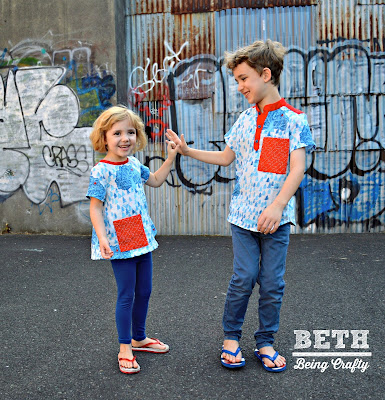 Unfortunately, the timing was a little difficult--on August 9th, we left Tokyo after living there for 15 months, so I sold my machine and packed up all of my fabric and kissed it goodbye until our shipment arrives in Portland in October.  But I held out a special piece of double gauze from Kokka--it's called Ihme Chamber, and when I visited the Kokka showroom in Tokyo I got to see the original watercolor for this print hanging on the wall!

I thought it would be perfect with my sashiko accents to make a really special item for returning to school this fall.  I was planning on making a top for The Boy, but Little Sister really wanted to get in on the action too, and so I made one for her as well.

I apologize in advance, but this is going to be a pretty long post since I used new patterns for both The Boy and Little Sister's tops, and I want to tell you about how they went together.  The pictures are really cute though--you should scroll through just for those! ;)


The Boy's shirt is the Prepster Pullover from Blank Slate Patterns in size 8, with some extra length (instead of doing a standard folded under hem, I just did a bias facing so I didn't lose any length from the cut pattern piece).  Otherwise I made the pattern exactly as written, and I really liked it!  I was nervous about doing the placket (I've never done one before), but it came out perfectly and the method was ingenious and very simple!  It made me want to start putting plackets on all the things.

My only complaint is that size 8 is the largest size, and I just bought the pattern--I wish there were more sizes so that it would last me longer!  My guy is 7 and a half and slim, and the size 8 fits really well in the body but I did add length as I mentioned--but he is tall for his age (and long of torso, which he gets from me).  I have to say, it was nice to start with the short sleeved version since the long sleeves do involve a lot more steps--although I wonder if the long sleeves will need extra length for him too?  The size chart doesn't give a shoulder-to-wrist measurement, just chest, waist, and hip, so you have to kind of guess on lengths.

I got the free printable sashiko embroidery pattern from the tutorial posted by Jo of Dotta on Imagine Gnats.  There are lots to choose from--I'm excited to try more of them!  I printed the pattern out at 100% and it was a perfect fit on my pocket pattern piece for the Prepster Pullover. 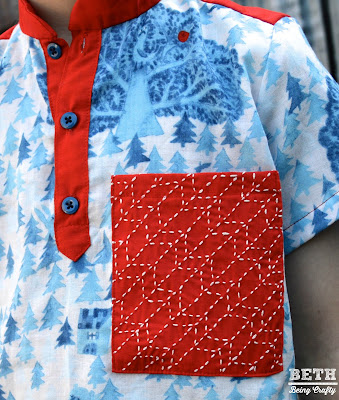 I can't remember now where I found this tip, but it worked so well--I traced the sashiko pattern on to a piece of the thinnest fusible interfacing I could find, then ironed it to the backside of my fabric.  Then I had the design right there on the back!


The embroidery on the back yoke was kind of an afterthought--as I was putting it together I thought that some extra detail would look nice there, but I had already partially sewn things together and didn't want to attach interfacing.  So I just traced the pattern with an air erasable marker and worked quickly!  I'm so glad I added it back there--I think it makes a huge difference. 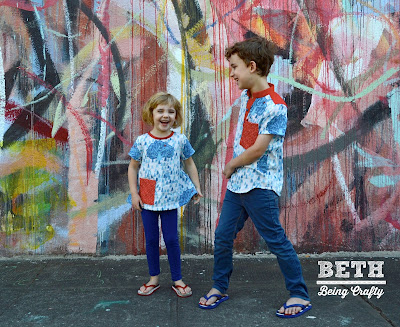 I had originally planned to make a dress for Little Sister.  I just bought the Norah pattern when it was a Friday Fiver (yay!) and showed all of the cute options for collars and sleeves to Little Sister.  She chose short sleeves, and she adamantly did NOT want any kind of collar.   I made a mental plan to make the short sleeved dress with a  center panel of sashiko embroidery down the front, and had my fabrics all cut and prepped for that, but...


She really wanted a shirt, not a dress, since she wanted hers to be a close match to her brother's.  She also vetoed the center panel (thankfully I hadn't started embroidering yet, or she would have been out of luck) in favor of a pocket like Big Brother's.  I re-cut the front to put that big tree front and center for the tunic length with no embroidered center panel.  Then she wanted a button placket too, but I didn't have enough fabric to cut another front panel out and I wasn't going to chop the focal point tree in half, so we compromised on the red bias tape neckline instead of the clean neckline with lining.  Honestly, even though I would have loved to do a few things differently design-wise on this dress, it's so worth it to listen to her input because then we end up with a garment that she will actually wear.  It's not worth it to make a dress my way that sits in the closet because I ignored what she wanted!

I did line the back yoke using the same method as in the Prepster Pullover, so it's nice and clean on the inside.  And of course she got the back yoke embroidery as well! 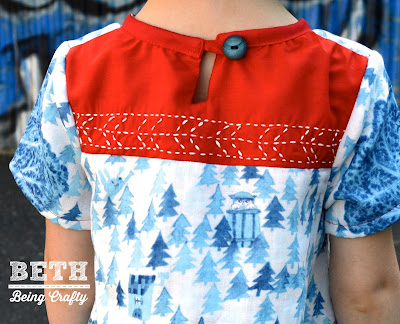 Oh, and speaking of fit, since I added the embroidery, I shortened the opening in the back of the tunic.  But I shortened it too much--oops!  I had to widen the neckline slightly so that Little Sister's head could fit through.  But all's well that ends well!

There was something so soothing about doing the embroidery.  First of all, the project was so portable!  We have been enjoying being back in our Portland house with a big front porch where we watch the neighbors go by, and it felt pretty idyllic to watch the kids eat ice cream on the porch swing while I sat and embroidered and drank craft beer.  It's also a great thing to do while watching a movie (although you may miss some key visual effects while you're looking at your stitching).  The longer I sew, the further down the path of special details and nice finishes I go--I'm working on being less slapdash and instant-gratification oriented, and this handwork inspiration project was really very enjoyable, and I love the results.

Posted by bethanycavanaugh@gmail.com at 11:16 PM 12 comments

Wow, moving from one country to another does not go well with blogging!  I have been out of it for a couple of weeks, what with getting ready to move back to our home in the US and then working through the settling-in process, and now I think I'm about ready to start catching up on blogging some of the projects I've finished in the last few months!

I'm taking baby steps--this first post will be a quick one on a simple elastic waist skirt I made.

I used the same proportions as when I made this double-gauze skirt, but I only had wide white elastic, and I didn't like the way it looked with the more muted color palette of this lovely Melody Miller print.  So I decided to make an easy encased elastic waistband this time, and I think it's a great look!


The waistband gives the skirt a little bit more professionally finished look, I think, than the exposed elastic waistband, although I think those have their place as well!  Rather than just folding the fabric over to make a waistband, I cut one that was about 1.5 inches longer than my hip measurement.  This reduces bulk at the waist while still allowing me to make an easy pull-on skirt.  To figure the width, I just doubled the width of my elastic and added about an inch for seam allowances.

I attached the waistband to the inside first, then topstitched it to the outside of the skirt so that there would be no raw edges on the inside.  I also did french seams on the sides, so everything is enclosed! These are the little things that I appreciate now as my sewing skills increase--my older garments with raw, fraying edges on the inside just aren't holding up as well as I'd like, plus they feel much more "homemade" rather than hand-crafted when the inside doesn't look nice! 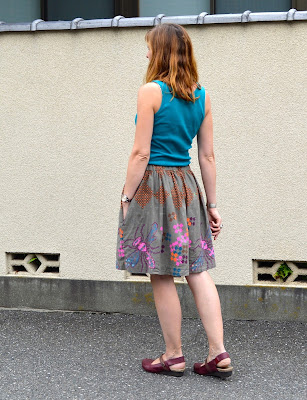 When I wear this skirt, I usually push the gathers to the back so that I get a flatter front and more poof in the back.  Just personal preference!  And I also like the way it looks with an untucked top, although I definitely only wear full skirts with fitted tops, unlike many of the Japanese women I see walking around!  They can pull off head-to-toe loose garments, but they just look like sacks on me. 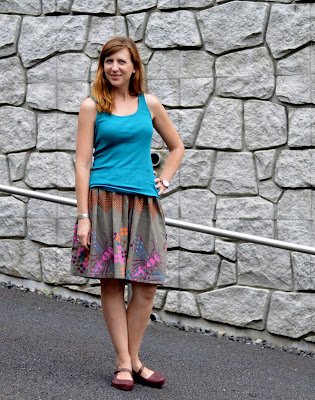 I had to finish this shoot quick, since I was really starting to get wet! 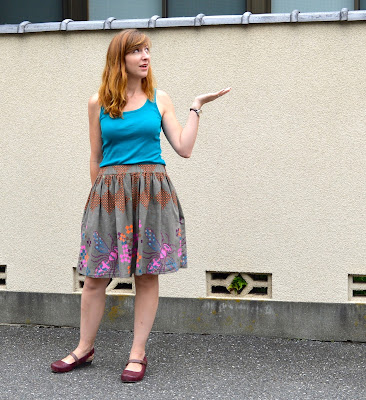 The people walking down this street thought I was crazy!

I've got a few more things to show you, hopefully soon!  I was pretty busy sewing things up before we left Tokyo since I knew it would be a few months before I saw all of my pretty fabric again.
Posted by bethanycavanaugh@gmail.com at 12:11 AM 4 comments