Let me get this out of the way:  It's been a while.

Clearly, I have not been blogging, but I'm trying not to let that bug me.  So what if I only blog every once in a while now?  Just because I have ignored the blog for the last 5 months or so doesn't mean that I'm not allowed to post when I DO feel like it, right?

It's just that I've been using Instagram (I'm bkcav, if you want to follow me there) to share my sewing lately, which has been more satisfying and engaging--I can immediately see what others are sewing, and there's such a huge active sewing community there.

But THIS project requires a few more words than what fits on an instagram photo, so I thought I'd accompany my instagram pic with an actual blog post to show off what I did here. I'm pretty pleased with myself!

First of all, I ordered a yard of this great rayon challis print with the intention of making a loose tank top (I've been perfecting my pattern for a while now--I started with the free Sorbetto Tank from Colette Patterns, and have tweaked and shifted and adjusted so many times that I'm not sure you can even count it any more!). 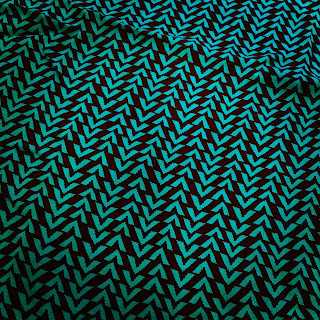 I was pleasantly surprised to get a bonus in the mail--I got the end of the bolt, so I got almost 2 yards of it instead of just one, but that meant I was faced with a dilemma--use the extra fabric to make a dress instead of a tank, or make the tank I originally had in mind and see what was left over?  I couldn't really let go of the tank, since that was what I pictured when I saw the fabric and I was anxious to use the tank pattern now that it was just how I wanted it, but I hated to waste the rest! 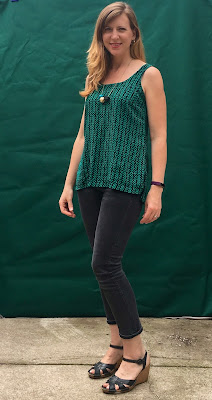 I have been doing a curved hemline on this tank pattern, but this time I wanted to try a vented side with straight hems on the front and back.  It was a nice break from the curves--I have been using bias tape to get curved hemlines to lay flat, and this time I could just fold, press, and hem the old-fashioned way! 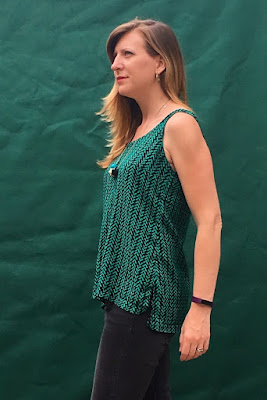 Well, it turned out there was JUST enough to eke out a simple gathered skirt.  I did a rolled hem on my serger to avoid using fabric in the hem, and gave it an elastic waistband, both for ease and again to save fabric.  I was able to make pockets (OF COURSE) from the scraps around the tank top pieces.

And now for the cool part--when I put the two together, it totally looks like a dress!

And not only that, I have dress OPTIONS!  Depending on where I put the waistband, I can also get a dropped-waist more slouchy style: 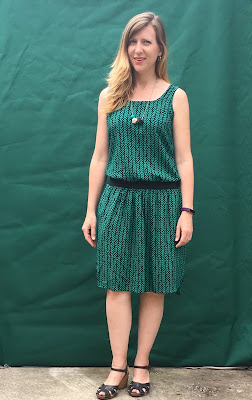 Honestly, this is less my style, but it's still nice to play around with it!

And I could wear the top out over the skirt as well, giving it a layered look, although one that I probably won't wear.  Maybe with a belt--a sort of peplum idea?

Anyway, I have been sewing with rayon challis a LOT this summer--it's so nice and soft and drapey, and easy to sew with!  But it definitely wrinkles, which means a lot more ironing that I am used to.  But I think it's worth it, so far!
Posted by bethanycavanaugh@gmail.com at 2:49 PM 2 comments