Going Global, so to speak...

This is it--the week we leave for our 2-year expat adventure in Tokyo!  We depart on Friday, so this week is full of packing, sorting, and dumping all kinds of stuff.  Sewing isn't really on the agenda, so luckily I finished this dress a couple of weeks ago but haven't posted it yet.

Tokyo summers get really hot and humid, so I knew I wanted to use this breezy fabric to make a blousy casual sundress (with pockets, of course) that I could wear once we moved.  This week is a"Going Global" theme over at Project Sewn, the women's online sewing contest I have participated in before, so I thought I could make this dress work, if I could just get some photos and squeeze in a blog post before we depart!  Bonus points for a fabric that makes me think of an Indonesian Ikat, although this print from Joann's is certainly not authentically global.

So here it is--a dress I made to wear when I "go global!" 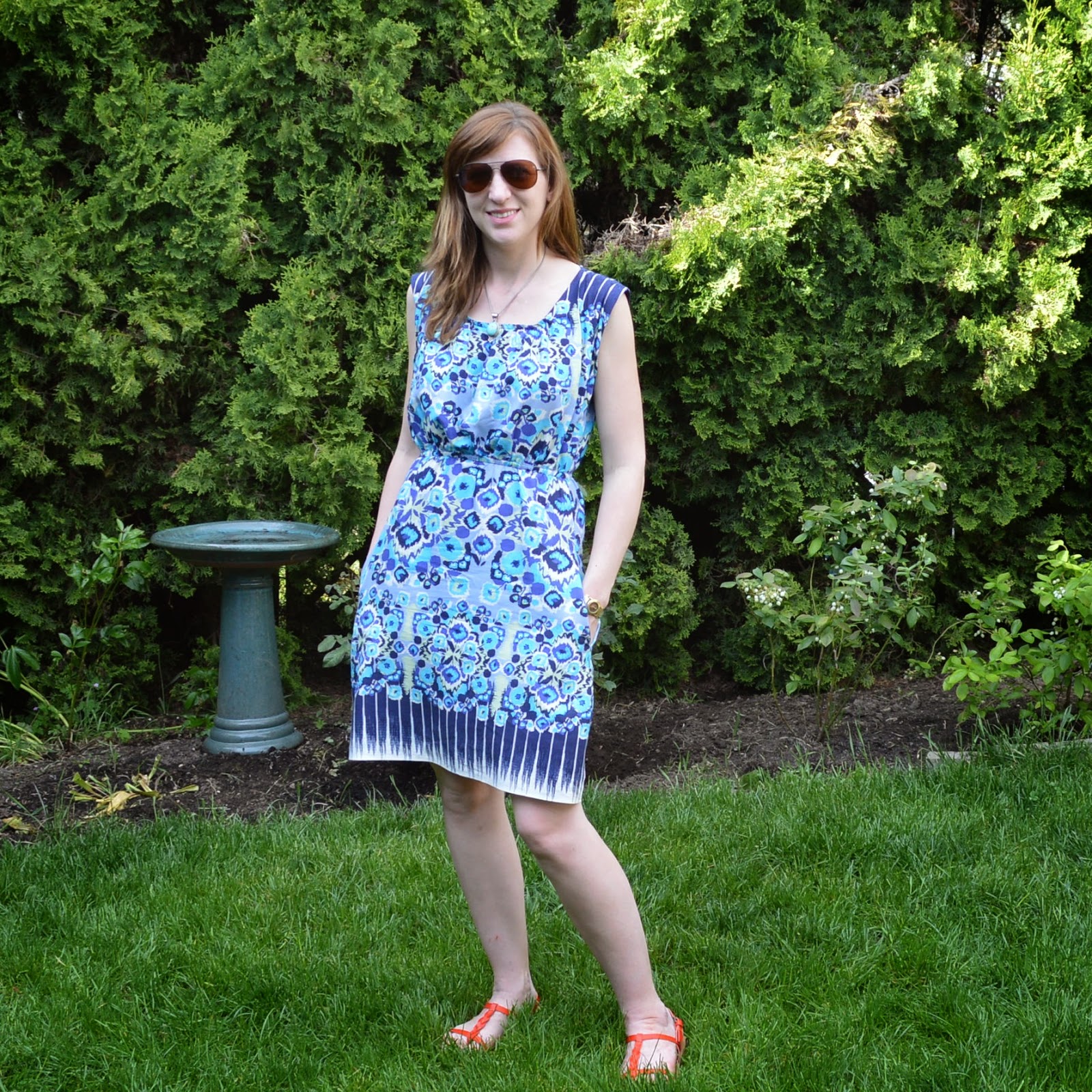 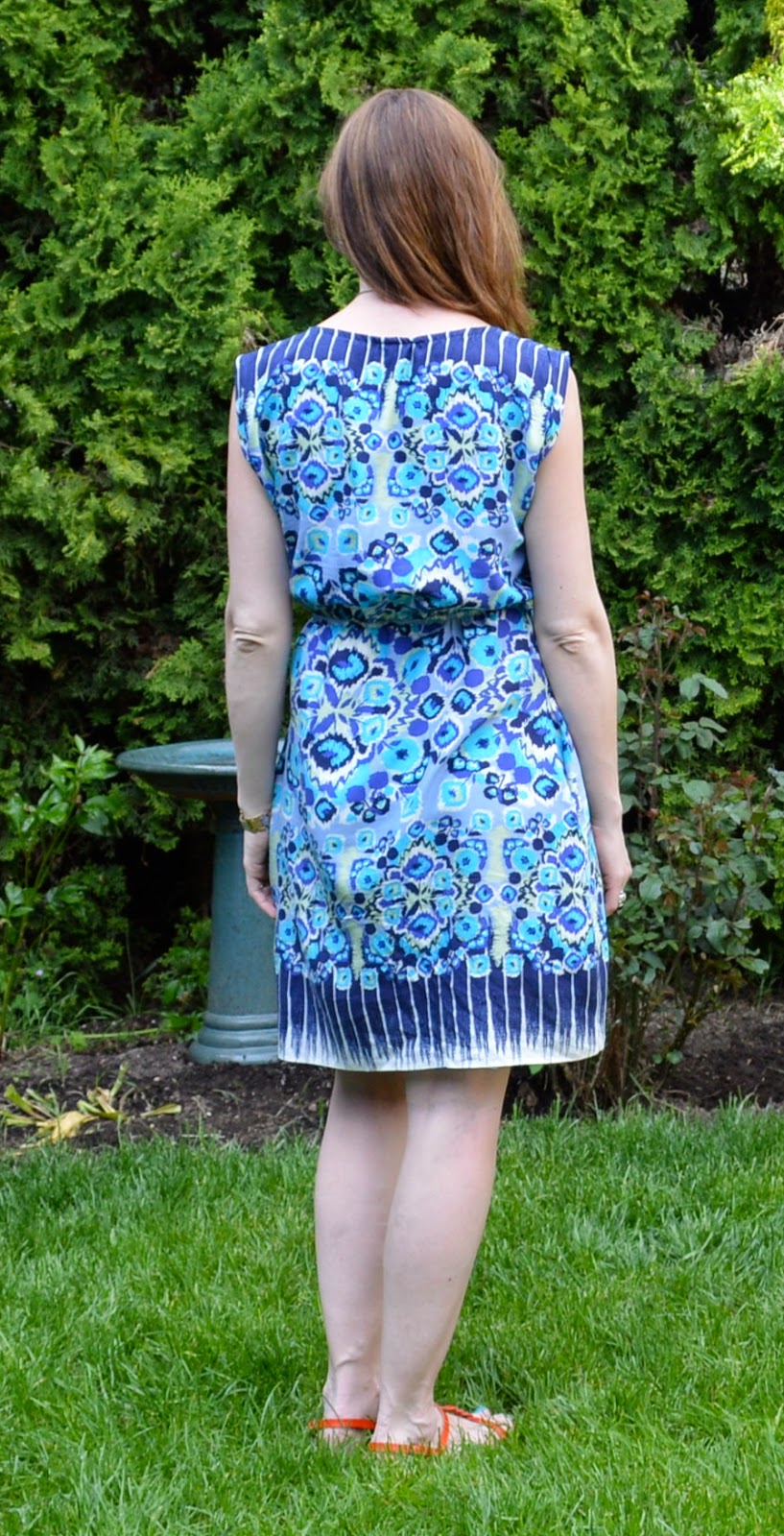 I loved the border on the fabric, so I used it for the bottom of the skirt, and turned the fabric the other way to repeat the effect at the shoulders. 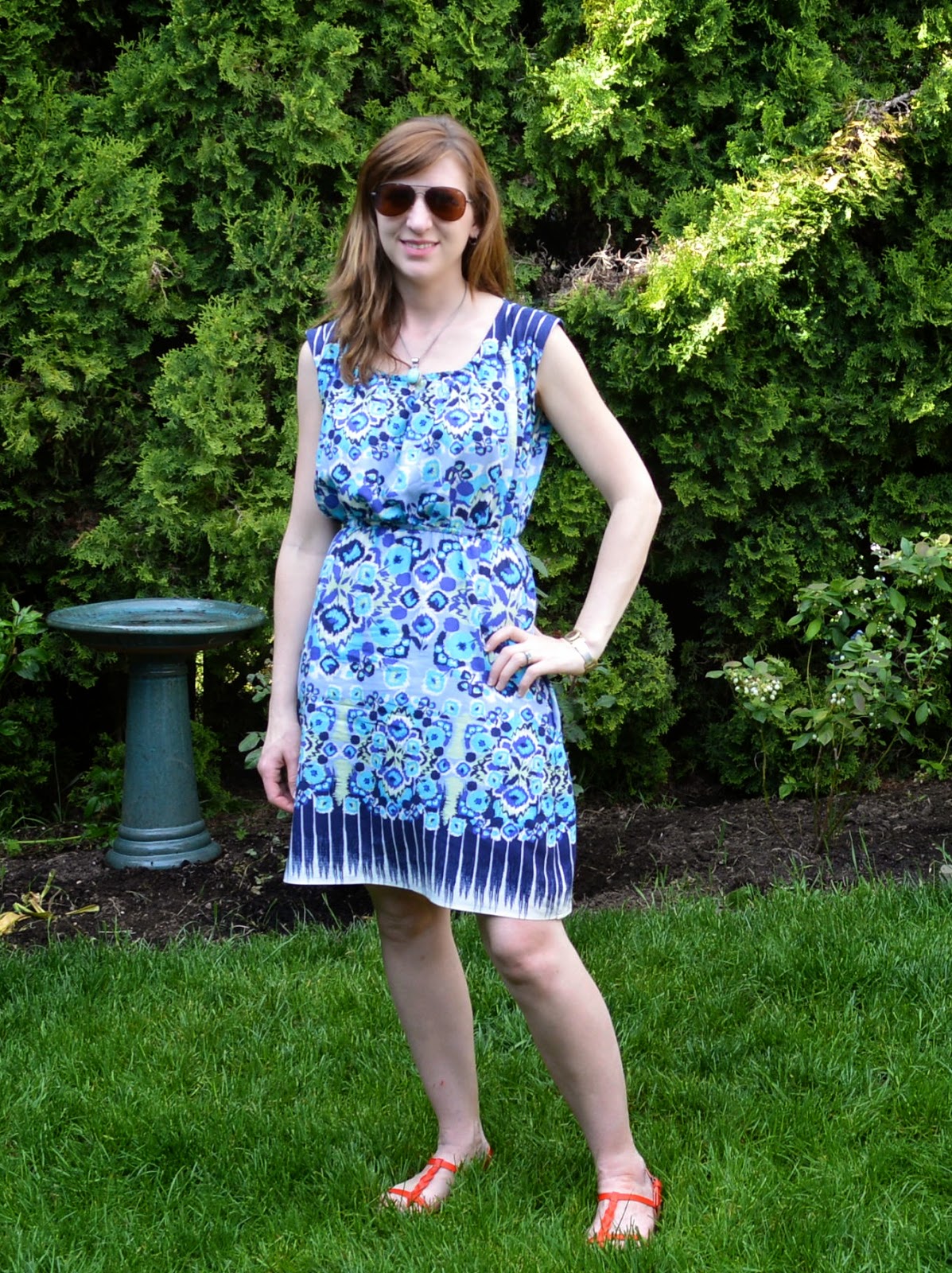 I drafted the pattern based on a dress I own, and wanted to try it out before I make it again with some lovely fabric I bought at Britex Fabrics in San Francisco last year.  I love the way the pattern came out--flattering and comfortable, and can be dressed up or down based on fabric choice!  This "ikat" is a nice light drapey rayon blend, and the stuff I bought at Britex is a thickish printed chiffon (so I'll need to make a slip/lining for it) that will look dressier.

You can vote for my global dress here starting this Friday, if you are so inclined!
Posted by bethanycavanaugh@gmail.com at 4:11 PM 2 comments

I bought this cute corduroy dress for Little Sister at a thrift store for $2, but she refused to wear it because it had cute 3/4 length sleeves, and she does NOT like sleeves that don't come all the way to her wrist (who knew?)  I wasn't ready to abandon the dress completely, so I cut off the dress's sleeves past the shoulder (so I didn't have to deal with setting in a new sleeve), found a few scraps of a cute knit print (not big enough to make a whole new sleeve anyway!) and made some tubes that I attached to turn it into a long sleeve, and voila, now she loves it! 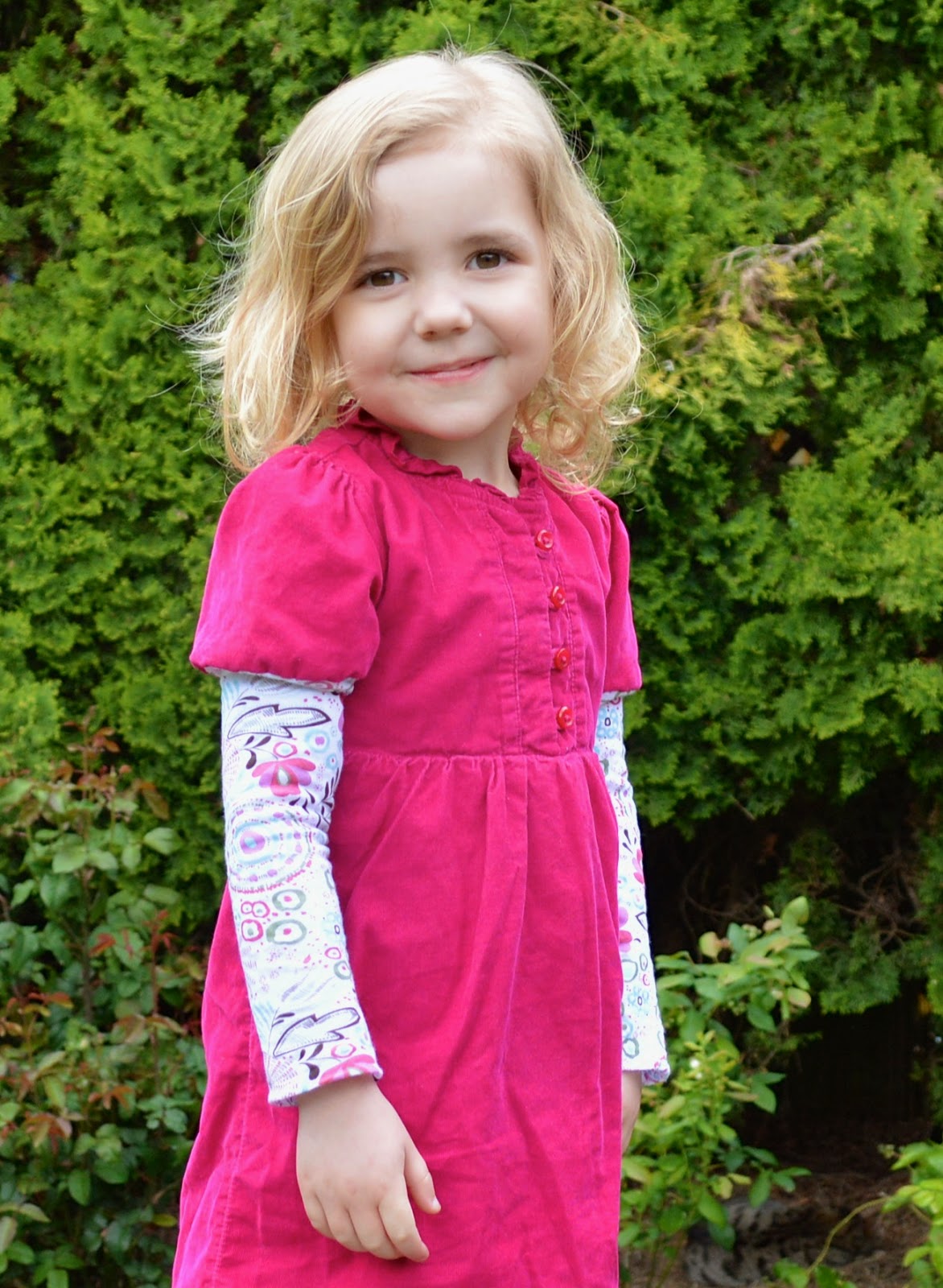 Plus, I couldn't resist putting on my matching shirt (that's where the scraps came from in the first place).  I can't do full head-to-toe matching, but sharing a fabric in our outfits is pretty fun. 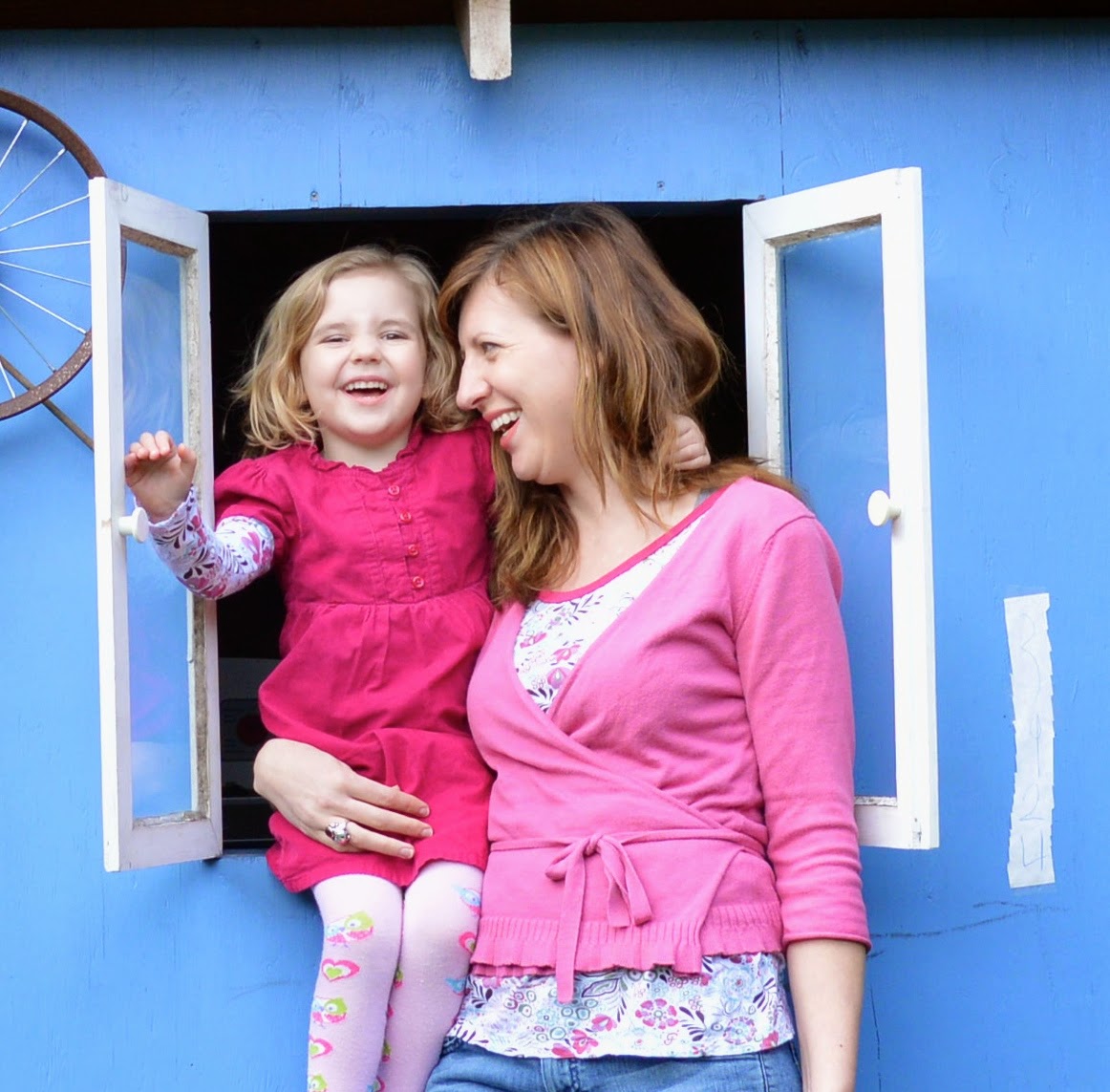 Little Sister had fun playing along with me taking some photos, but they were a little too hard to tell that the print actually matched.

Later today, we will be getting all dolled up to go see Fancy Nancy at the local children's theater--Little Sister has had her outfit and accessories laid out for days, and she has definite opinions about my outfit as well.  Jeans are definitely not allowed, and high heels will be involved.  Can't wait to see what I'll be wearing!

Edited--how could I leave you hanging like that?  Here we are, ready for our theatrical outing:

Posted by bethanycavanaugh@gmail.com at 2:24 PM 1 comments

Email ThisBlogThis!Share to TwitterShare to FacebookShare to Pinterest
Labels: alteration, quick project, use those scraps

I've just finished what will be my last sewing project before we move to Tokyo!  Well, probably.  Most likely.  Maybe some last-minute alterations or repairs.  But I have packed up my fabric, and there just isn't any more time!  I have several other projects that I have finished but not blogged about, so you may see a few more posts before we leave in a few weeks, but I will not be sewing anything new now that this dress is done. 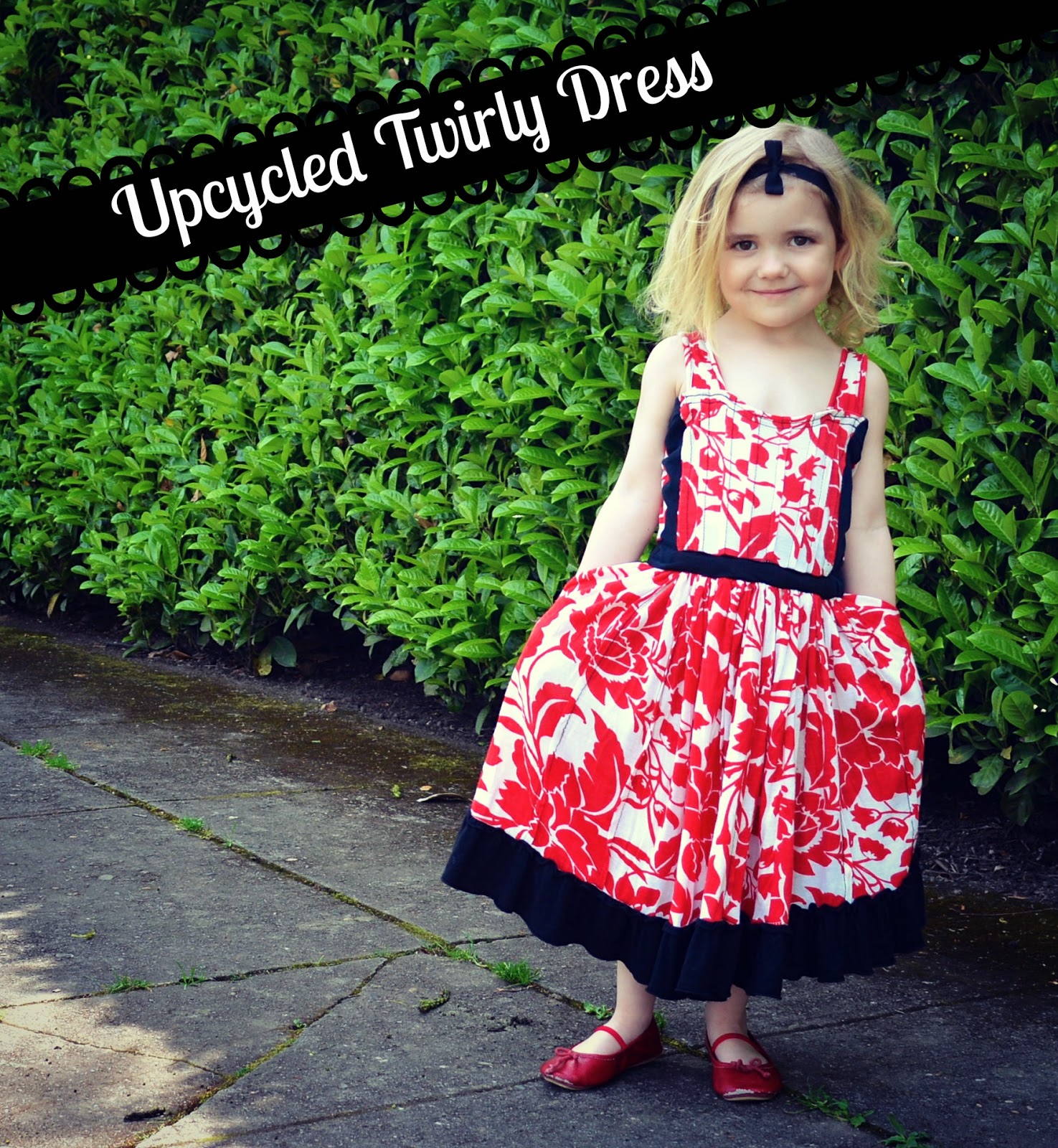 Little Sister wore this dress three days in a row after I completed it, so I would say she likes it.  And that's saying a lot these days, because girlfriend is PICKY.  I had a feeling, though, that she would be a sucker for this full twirly skirt.  I mean, who wouldn't be? 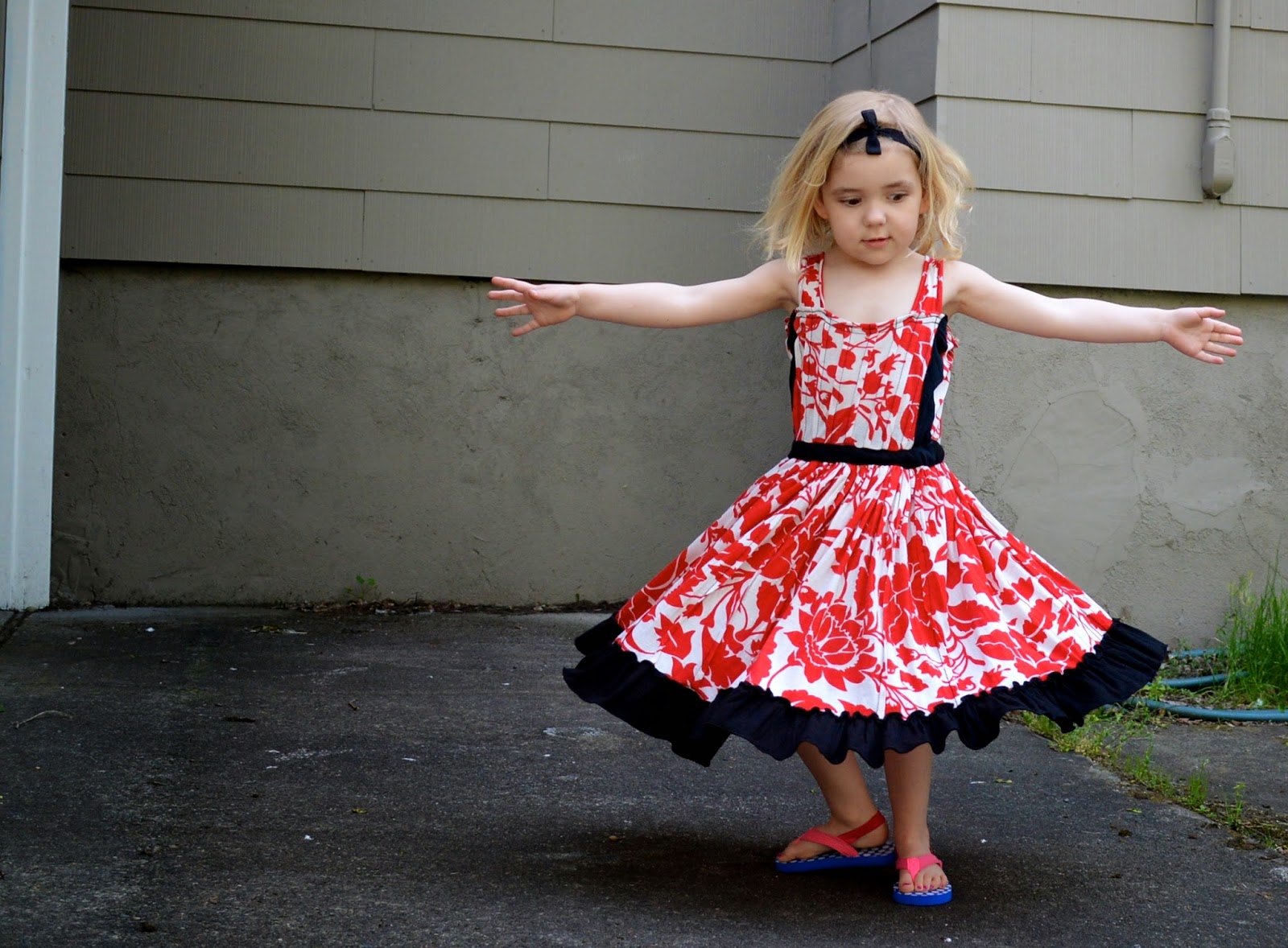 I have been wanting to make her something like this for a while, but I can't bring myself to buy enough fabric to make a skirt this full.  Especially in a  nice drapey knit like this--that would be so expensive!  But as I've been sorting and packing for our move, I came across this dress in my closet.  I think I shrunk it, because it's way shorter on me than I am comfortable with but I am certain this was not always the case.  I used to LOVE this dress, which is why I still have it--I couldn't bear to part with it.

But cutting it down for Little Sister--now I could live with that. 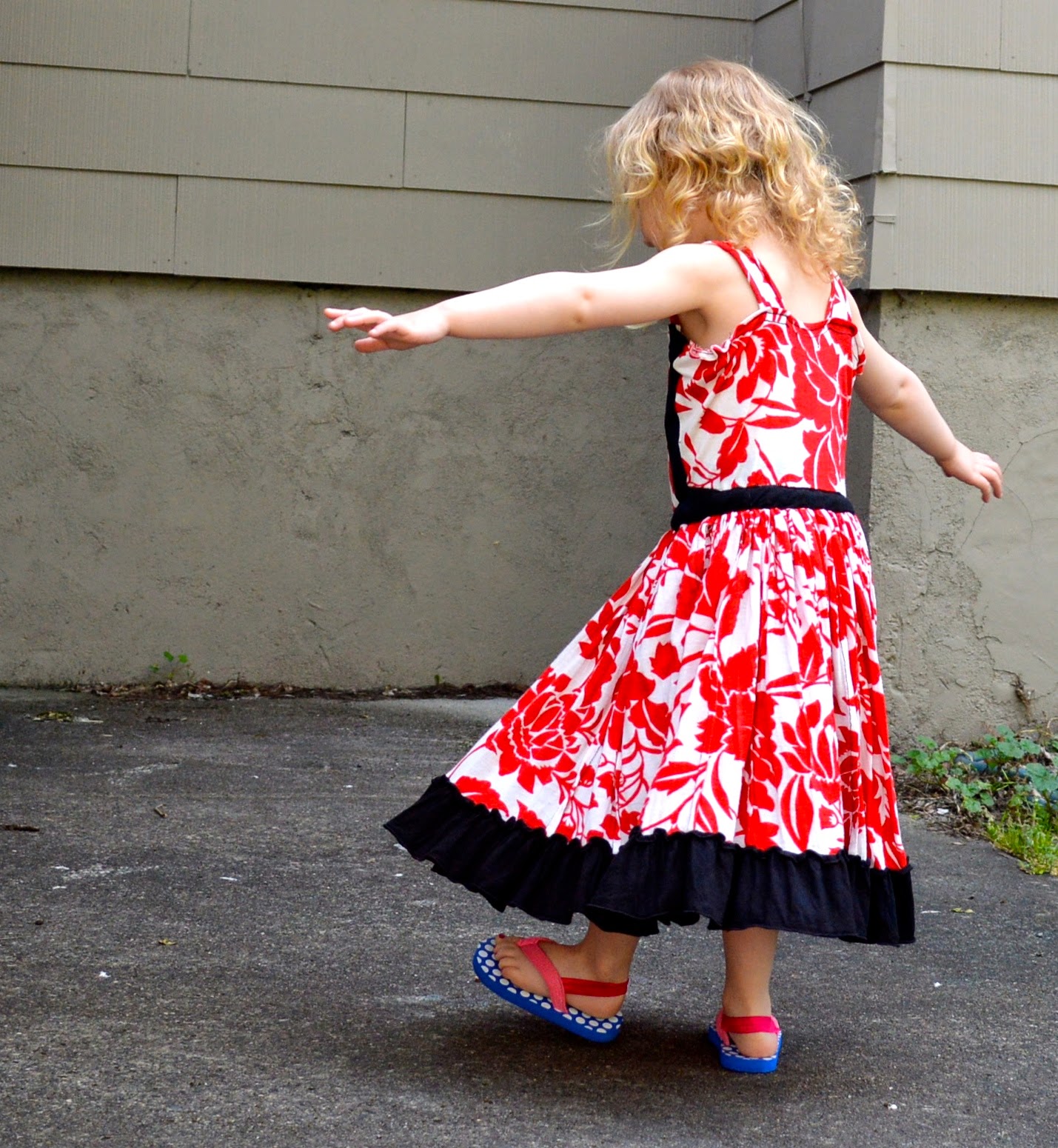 I kept all of the fullness in the skirt--the knit is lightweight, so it's not too heavy even with all that fabric.  I cut the skirt right at the top of the existing pockets (this was the first dress I owned with side-seam pockets--what a game-changer!) so that Sis could have pockets in her dress too.


Then I made the necessary modifications to bodice, straps, etc, added elastic to the waistband on the inside, and voila--twirly fancy little girl heaven! 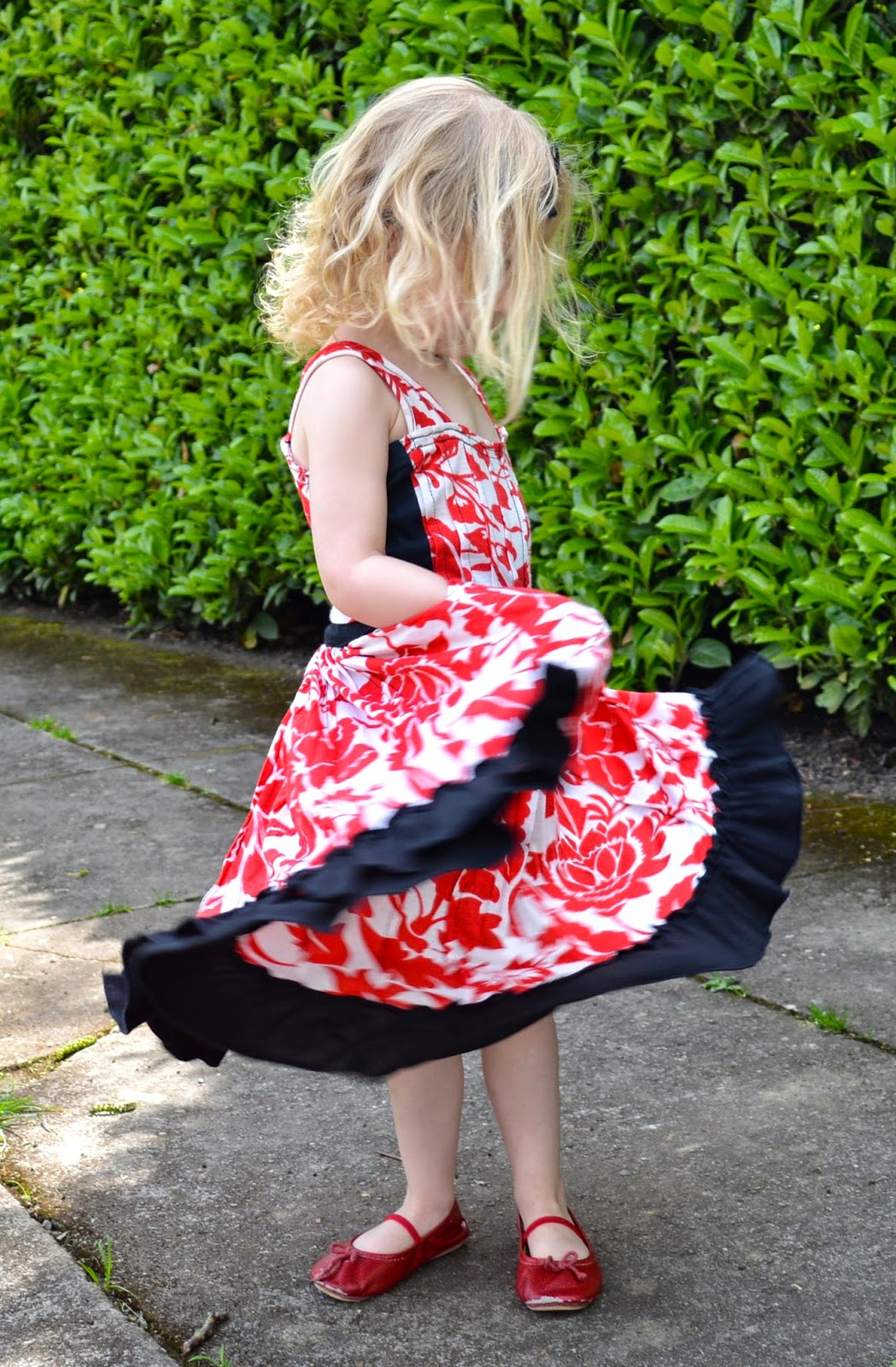 I love that it's long enough so that she doesn't risk exposing herself when she twirls, but short enough that she doesn't trip over it.  And I think the sizing is forgiving enough that it should last her a while!  Should be a winner.
Posted by bethanycavanaugh@gmail.com at 10:10 AM 1 comments