Last year, we had fun making/adapting our own halloween costumes, but I never got around to posting them.  I intended to take some good pictures but never did it, and here we are a year later with still no post about what ended up being a really fun set of costumes.

So, here's the rundown:  The kids wanted to be minions. 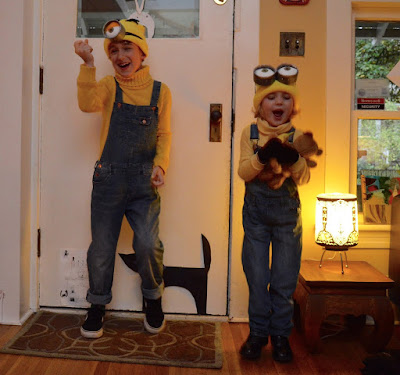 Thrift store overalls (luckily found in close-enough sizes), thrift store yellow turtlenecks (adult sizes that I cut down), goggles made from empty duct tape rolls and those rounded masks you wear to keep from breathing in dust, and stocking caps ordered on Amazon.

And then the most amazing thing happened.  We were eating an early dinner, getting ready to go trick-or-treating, when we joked about how great it would be if the hubs had a Gru costume.

Then we realized...it wouldn't take much.  He had a black wool car coat and scarf.  He had a pair of pants that he bought in Tokyo not realizing he had accidentally purchased very skinny skinny jeans.  I stuffed a long, narrow decorative pillow into his jacket's shoulders, and Voila... 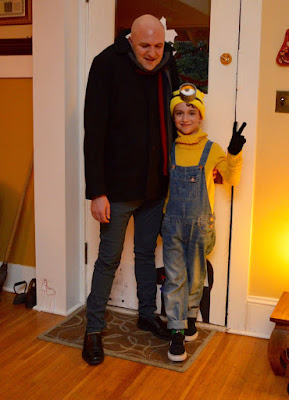 Is that amazing or what??

Since hubby had not originally planned to wear a costume, I planned my outfit separately and therefore don't fit in at all, but that's ok.  I was Kiki from Kiki's Delivery Service, a charming Miyazaki movie that you should watch this Halloween season if you've never seen it! 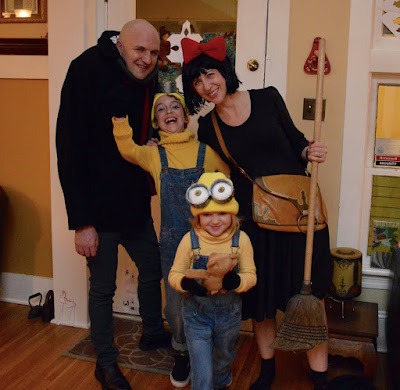 So that's it!  This year, we're not doing homemade costumes (sniff)...the kids wanted to be characters from Harry Potter, and it just didn't make sense to make Gryffindor robes when I could buy them so easily.  But there will be some surprises in store (if I get around to posting them before next year!)
Posted by bethanycavanaugh@gmail.com at 9:31 AM 1 comments