As promised, here is a tutorial for the bike bag that I made for The Boy!  Fair warning--he was fairly distracted by the bag the first few times he rode his bike with it on there, resulting in less-than-careful riding at first, so I recommend only riding the bike down the block while getting used to how awesome it is to have a bike bag. 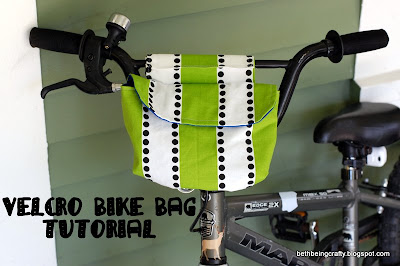 I used an outdoor canvas fabric for the exterior, and my lining fabric came from Grandma's fabric stash so I'm not sure the fabric content, but a quilting cotton or similar would work fine.  I didn't use any interfacing but you totally could if you like a stiffer look to your bag--just iron it onto the backside of your bag body and flap fabric and follow the directions below.  You won't want interfacing for the velcro tab.

So!  Ready to get started?

I based the size of my bag on the bike itself.  I wanted the end result to be about 10 inches wide and 6.5 inches long, so I cut my exterior fabric to be twice that plus seam allowance, for a total of 11 by 13 inches.  I would have just cut the interior the same, but since I was using scrap fabric I didn't have a piece that size--so I cut my rectangle long and skinny instead, making the fold on the side instead of the bottom--it ended up being 6.5 by 21 inches.

It actually worked out great to do it that way, because I could leave the hole for turning the bag right side out right in the middle at the bottom--if the fold was at the bottom, the hole would have been on a side seam which would have felt a little weird to me.  All that to say, you can cut your interior fabric rectangle either way.  In any case, fold the interior fabric in half, wrong side out, and make sure the top is open and sew the other two sides, making sure to leave a hole about the size of your hand for turning right side out.

For the exterior fabric, do the same, except no hole--fold in half wrong side out, and sew the two sides completely closed.

To create a flat bottom for the bag, you are going to fold out the corners for both the interior and the exterior--but I only took pictures on the interior, because you could see the thread better in the pictures.  Just know that you'll do this on both pieces!

With your bag piece still wrong-side-out, pinch the bottom seam to make a point at the corner.

Then sew a line perpendicular to the bottom seam across the corner, making that little triangle.  Do this on both sides of the bag, and then do it again for your exterior piece. 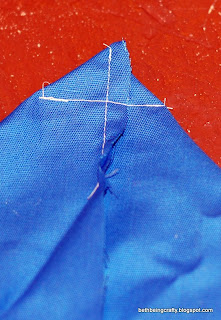 Set the interior and exterior of the bag aside for now--it's time to make the flap.

Your flap pieces will be a little narrower than the top of your bag.  Because I used such a bold print, I made sure that the print on the flap lined up with the bag body.  I am usually so bad about that! I cut mine 9.5 inches wide and about 4 inches long, and decided to curve the corners. 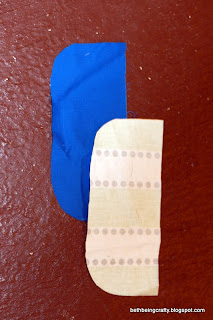 Now, I forgot to add my velcro until after my interior and exterior flap pieces were sewn together, so that's what you'll see in the pictures (it's possible to do, just more finicky).  What YOU want to do is add your velcro strip to the interior flap piece BEFORE sewing them together, so the seam from attaching the velcro won't be visible on the exterior of the bag.  Center your velcro and sew it on about an inch from the bottom on the RIGHT side of your interior flap fabric.

Now, place your two pieces right sides together, leave the top open, and sew the rest of the way around.

Flip the flap right side out and press flat.  Or if you choose to topstitch the edge like I did, you can skip pressing (one of the reasons I love to topstitch!)

And here's the front of the flap. 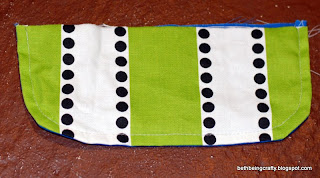 Next up is the velcro flap to attach your bag to the bike.  I cut a rectangle 6.5 inches by 13 inches (I wanted to end up with approximately a 6 inch square).   Again, I lined up my print to match the exterior of the bag.  Then I folded it in half wrong-side-out, sewed around the outside leaving a hole to turn it right side out, turned it, and topstitched it to close the opening and finish the edges.  Then I thought I was so smart to attach my velcro at this point.  After finishing my bag and realizing that I wanted my velcro flap to close in the opposite direction, I figured out that it would have been no more difficult to attach THIS velcro at the end, after everything is assembled.  I guess I was afraid of leaving the velcro until too late after my mistake with the flap, but in this case, you can just wait.  Unfortunately my only picture of this tab already has the velcro pinned on--so just ignore that. 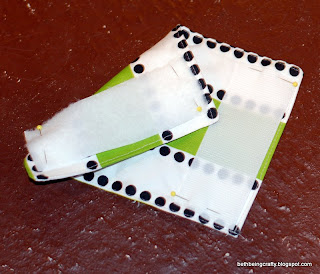 You could also make two smaller tabs and spread them out closer to the side seams of the bag.  If you do that, make sure to keep both tabs on the back side of the bag (don't go past the side seams)--otherwise, your bag will twist when you attach it.  The two-tab idea would work well for a Skuut bike since it doesn't have a bar in the center.


Now you're ready to assemble the bag.  You should have four pieces--the flap, the tab, the exterior, and the interior. 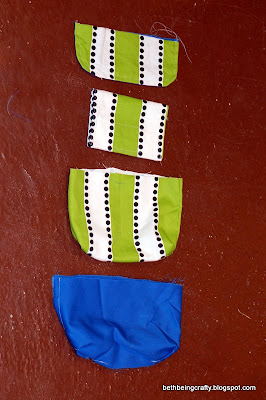 Start with the front flap. Then fold your tab in half and line the fold up with the raw edges of the flap.  Next, grab the outside of the bag with the right side out.  If it matters in your case, get your print lined up at this point. 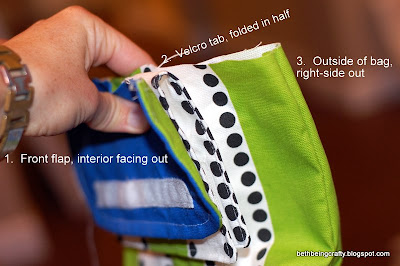 You might want to pin these three pieces together just to make sure they don't slip during this next step.

Next you will take the interior of the bag, still WRONG side out, and slip it OVER all of the other three pieces, lining up all of the raw edges at the top.  Pin all around, then sew all of those raw edges together.  It will be pretty thick where the flap and tab are attached (especially if you used interfacing), so go slowly. 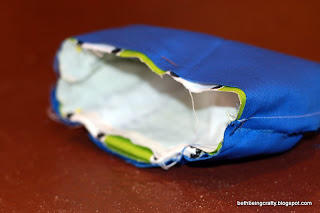 This is always the magical part of making a bag for me--reaching in to that hole I left in the interior piece and pulling out a practically completed piece! 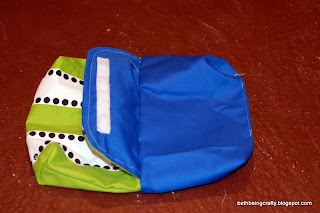 Because this is a bike bag for a kid, I didn't bother with an invisible seam for closing the hole--I just ran it through the machine.  I didn't even switch to matching thread! I can be lazy at times.  Once that's done, tuck the interior of the bag inside the exterior.

Next, line up your velcro for keeping the flap closed on the exterior of the bag and sew it in place. 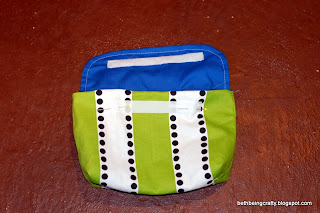 At this point, I topstitched mine around the top; again, this step is optional.  And NOW, you can try the bag on the bike and figure out which way to attach your velcro.  See below (and in the photo at the top of the post)--my velcro tab wraps around the BACK of the bar so that the edge sticks up in front.  That just bugged me, so I ended up taking my bag apart and flipping that tab around.  If you wait to attach the velcro, you won't have that problem.  Or maybe you are better with spacial relations than I am and figuring out which way the velcro is going to face when you sew the tab in place is not an issue with you--I don't know your life. 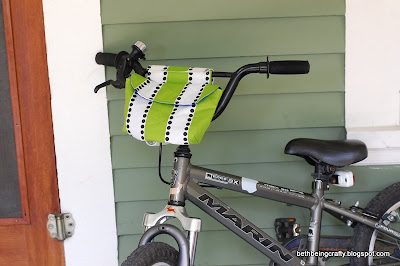 Here's how it looked after I flipped the tab around--no weird velcro edge sticking up at the top.  Much better. 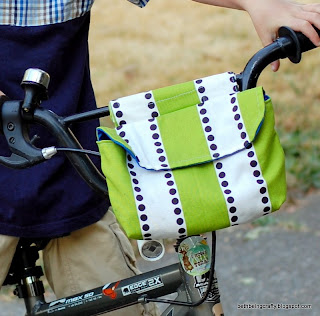 Definitely ready to ride on the first day of school! 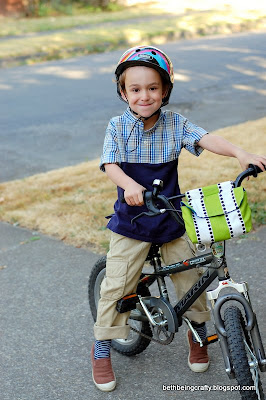 Trying to decide if I should do a tutorial on that shirt he has on.  He loves it, but then again he gets super excited whenever I make something for him since it's not nearly as often as Little Sister gets stuff.  His dad thinks it looks like he's got a dish towel over his shoulders.  I kind of think it looks like a crop top over a tank top--not exactly the look I was going for.  There are things I liked about making this shirt, but I would do the proportions differently if I did this kind of "upcycled button-down meets t-shirt" thing again.  OK, I think I've talked myself out of a tutorial.  I will do a proper "first day of school outfits" post so you can get a better look at it, but maybe the full tutorial by request?  Sound good?
Posted by bethanycavanaugh@gmail.com at 2:43 PM