For Little Sister's first day of school (ever!  My baby!), I made this little dress for her from this tutorial at Scattered Thoughts of a Crafty Mom. She has only wanted to wear "tank top dresses" lately, and I'm trying to make things that she will actually wear.  It worked out--she agreed to put it on for her first day of school, yay!  Although she has refused to wear it since. 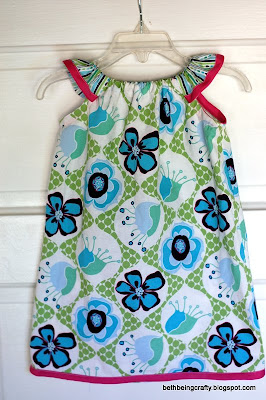 This was a great tutorial, and I love this dress.  The elastic neckline makes it really easy to construct and really easy to put on and take off of a squirmy two year old.  She says the pattern is for 3T and up, so I made mine a tiny bit narrower in the body (about 1/4 inch)--I think it would have been fine to just leave it though.  Oh, also, the tutorial is for a top, so I used one of Little Sister's dresses to figure out how long to cut it so that it would be a dress. 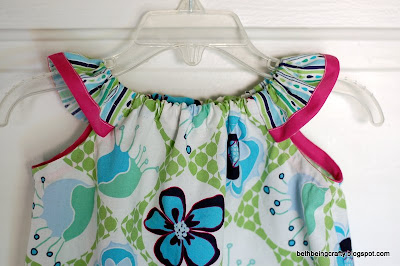 And I did one other thing differently--I added bias trim to the flutter sleeves and bottom of the dress rather than folding under and hemming, and I made my bias trim on the sleeves and hem visible for a decorative addition.  The main fabric has a tiny pink outline around some of the flowers which is hard to see in photos, but I promise, the pink trim doesn't come from nowhere!  You do this by applying your single-fold bias tape backwards, basically--rather than starting by sewing the bias tape to the right side of the fabric then folding it towards the inside of the dress and sewing it down, you start by attaching the bias tape to the wrong side of the fabric then fold it over to the outside of the dress and sew it down so that it's visible.  I like the pop of color it adds (especially because I rarely have matching bias tape and I hate making it), and the pink makes it much more likely that Iris would actually choose to wear this dress.

A note about adding the bias tape to the flutter sleeves and hem--since I wasn't folding under and hemming, I didn't need any seam allowance.  I wanted my flutter sleeves to be a little longer, so I just stuck with the original sleeve pattern.  Just remember that if you're using bias tape to finish the edges, the cut piece will be exactly the length that you cut it (well, maybe a SMIDGEN smaller).

I also added a tag, since the back and front of this dress are pretty much identical.  I could have just left it out since it really doesn't matter which way it goes, except that there is a little seam in my bias trim in the back.

Anyway, even though Little Sister was excited enough to put on the dress, she was NOT EXCITED about her first day of school.

She did agree to come with us once I allowed her to push the stroller herself (what a big girl, right?).  She carried the lunch boxes in the stroller--very helpful.

And I'm pleased to report that she was doing great at pickup (I snuck in a little early and spied on her for a minute), and while she cried at every drop off for the first two weeks, she is now running into school happily in the mornings.  Phew!

She was in a much better mood by the afternoon, and even agreed to pose for me without crying.  For about two seconds before she was off and running.
Posted by bethanycavanaugh@gmail.com at 10:00 AM