My brother's name is Matt.  When he was growing up, we'd tease him by saying things like,

So every time I work on this project, I can't help but think, "Get in the car, Matt!"

He totally hated it, by the way.  If I remember correctly, this was a surefire way to tick him off all the way into high school.  So of course it was employed frequently.


In any case, my parents had recently pulled out the felt car mat that my grandma made for me and my brother when we were kids, and The Boy totally loved it, so I thought it would be fun to make car mats for all of the little boys' January birthdays I had coming up (The Boy included).  So I googled "car mat" and checked out some ideas for images I could include.  I saw several really simple ones that were sewn, and thought, "Well, those are too boring and small."  Then I saw several more intricate ones that were hot-glued, and I thought, "Well, those are cute, but they'll come apart with the kind of vigorous play that I know my boy does."  So, of course, I decided to do one that was both intricate and sewn.  I dove into making a mat for our buddy Tate, who had the first birthday of the month, with a plan to make two more later in the month.

However, after designing and laying out the road and starting to cut out my "town,"  I realized why the mats I saw online were either intricate or sewn down but not both.  Why did this not occur to me earlier?  Sewing all of those tiny details down was going to be A TON OF WORK!  It's a good thing I LOVE YOU, TATE!  because now it was too late to figure out a new gift for his birthday.

The good news is, it came out great, and was very well-received.

The bad news?  Little D wasn't getting one for his birthday, because I was BURNED OUT on sewing all those little details, and I knew I still had to make one for The Boy.  Sorry D, maybe next year!

So The Boy loved his car mat, but he was full of ideas for "improving" the car mat.  His suggestions usually take the form of  "Mom, why isn't there a car repair shop?  Mom, where's the zoo?  Mom, the cars want to go to the library."  So now that the pressure is off and I'm having fun with the car mat again, we've been collaborating on some additions: 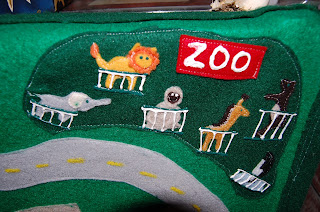 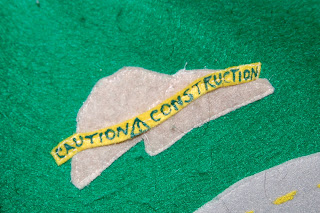 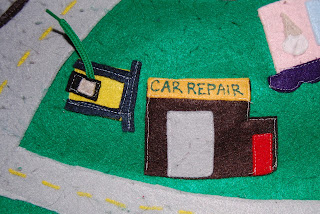 As you can see from some of these pictures, I also have an ongoing battle with pilling on this thing.   It gets a lot of car-rolling action.  I don't know if buying the $17.99/yard 100% wool felt would have made a difference in this scenario, but I wasn't willing to make that investment.  So instead, every time I play with The Boy on the mat, I can't help myself--I pick and pull at the pills whenever I can.

We've been having so much fun building this mat together, and it's so fun that The Boy and I both have ownership in it now.  I love it!  But I will probably not be making one for you.
Posted by bethanycavanaugh@gmail.com at 10:49 PM