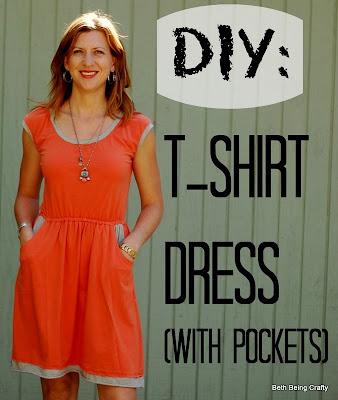 [Edited 9/28/13:  I am definitely cheating here, but there was no way I was going to complete a black dress for Project Sewn's Little Black Dress theme this week.  I already have two of them in my closet, and I rarely wear either, so it's just not something practical for me.  Plus, I am up to my elbows in sewing for the kids, and so I'm reposting this awesome dress that I love from two months ago, since the rules say you have to have sewn it in the last six months.  I just can't resist being involved!  AND, my book club just read Orange is the New Black by Piper Kerman, so it just kept going through my head.  Recommended, btw!  But I promise I will be sewing new things for the other themes.]

This dress was such a sewing win!  And I tell you, I needed one.  I feel like everything I touch lately turns into scrap fabric. This was low-pressure, since it was for myself (unlike the bridesmaid dress I was hemming and cut a hole in--maaaaaybe I'll tell you the story once I've figured out how to resolve it) and the fabric was picked up at a secondhand store for $4 for about 3 yards (unlike the leftover fabric from this dress that I attempted a tank out of, which totally doesn't fit in several weird ways).  I have also so far avoided getting any silly putty stuck in it.

But the happy ending is, this dress came together easily and quickly, it's super comfortable, and I LOVE it.  I want to wear it every day.  I will probably make another one. [When I do, I promise I will make it a tutorial!]

This probably isn't a color I would have picked out at the fabric store, but I think it's great.  It's a nice soft orange, not too harsh.  I love contrast bindings, so rather than using more of the orange I found this gray jersey in my stash that I had just barely enough of to bind the neckline and armholes, and luckily enough for a raw strip around the hem too, since I cut the dress shorter than I meant to.

I used the pattern I cut from a favorite t-shirt of mine for the top, which I recommend.  I have made several shirts from this pattern (see here, here, and here)--the original shirt and the ones that I have made have gathers in the shoulders, but I was feeling lazy so I just cut them straight across this time (curving down a bit actually to give a slight cap) rather than winging them up for the extra fabric to gather.  I skipped it for time, and because I wanted to do a simple armhole binding and not worry about hiding the gathered edges inside, but I actually like the simpler cap sleeve a lot.  I had marked my natural waist on my pattern, so instead of cutting the shirt full-length, I just cut it off about 5 inches below that natural waist point.

For the skirt, I used my trusty Milkmaid Skirt pattern, which I've also made several times.  It's such a great free tutorial from Crafterhours, and I thought there was no reason it wouldn't make just as good of a skirt for a dress.  I was right!  I cut out the pattern for the front and back of the skirt from the orange jersey, and made the pockets from the gray jersey.  I didn't cut out the waistband piece, since I'd be attaching it directly to my top.   And I waited to hem it until I could see the length of the dress as a whole.

Once I had finished the top and the skirt, I turned the skirt inside out (pinning the pockets shut so that they wouldn't shift around on me--you could also just stitch across the top of them to hold them in place).  The top of the skirt is much wider than the bottom of the shirt--on purpose. I pinned the side seams to eachother and stretched the top to fit with the bottom, pinning all the way around, then sewed them together.  This is the part where I wish I hadn't been so impatient to get it done, because I didn't take any pictures--wasn't really planning on a tutorial--but now that I've decided to explain it to you I'm really wishing there were pics to help.

So, what I did was turn the dress inside out.  To make a casing for the elastic, the raw edges from joining the top and skirt should be folded up toward the top, then fold up again so that the raw edges are hidden inside the casing.  Make sure to stretch the fabric gently as you go so that you don't get puckers in the front of your dress, and sew all the way around the top of the casing.  Then flip the dress right-side out again, and "stitch in the ditch" (sew on top of your other seam) where the top and bottom are joined together to hold the casing in place.  Make sure to leave an opening for your elastic.

Then run your elastic through the casing.  I used 1/4 inch.  Before sewing my elastic together and closing the opening in the casing, I tried the dress on to make sure the elastic was as tight as I wanted it.

I would save hemming for last--that way you know how short your dress will be once you blouse the top out a little.  I was planning to leave the hem raw, but since it was on the short side I added a second raw strip of the gray jersey, and I really like the added detail as well as the length!

[Also an edit--shortly after I posted this, Cate Blanchett wore this dress to an event.  Coincidence, or she saw my blog post and called her stylist?] 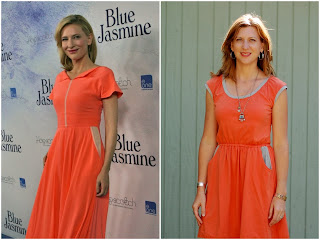 Posted by bethanycavanaugh@gmail.com at 4:36 PM

Email ThisBlogThis!Share to TwitterShare to FacebookShare to Pinterest
Labels: ideas/inspiration, links, tutorials, use those scraps, womens