I have a confession to make--this dress does NOT HAVE POCKETS.  Don't worry--my blog has not been hijacked, I really did make this, but it is a case of the pockets becoming too much hassle in light of every other hassle I encountered while making this dress, and instead of giving up and tossing it in the scrap bin, I decided to overcome everything else but leave the pockets out.  Maybe someday, after wearing it a few times and being irritated at the lack of pockets, I will figure out a way to work them in.  But for now, it is such a relief to say it is DONE that I am out of motivation to add one more thing.

Oh my goodness, this dress has been such a case of "Keep Calm and Grab the Seam Ripper."  Why is it that it's never just one or two little things that go wrong?  In my experience, putting a garment together either goes pretty darn swimmingly, or else it's a complete and total mess from beginning to end.  Guess which kind this project was?


Here's the part of this post I wrote before the dress was finished:    It's time to forget it for the night and hopefully have better luck when I start fresh tomorrow (or, as fresh as I can be after the kids have gone to bed for the night, my sewing time) [Edited:  I waited a good two weeks after this to pick it up again and hem the damn thing].  After inserting an invisible zipper TWISTED rendering it unusable not once but TWICE, I have to throw up my hands and give up.  And that's after taking off then reattaching the skirt, undoing the side seams, pulling the bodice through a narrow strap the wrong way, undoing and reattaching the waistband,  accidentally unpicking 6 inches of piping from the neckline while taking out the zipper for the second time, creating the lining as a muslin that ended up being ridiculously too small and had to be pretty much completely resized (actually a genius move in my opinion, since I don't mind a frankensteined lining and it allowed me to redraw the self-drafted pattern before cutting the dress fabric. [Edited to add--however now the side seams on the lining don't line up with the side seams on the dress, making on-seam pockets somewhat of a challenge])...um, let's see, I'm sure I'm forgetting something, but I'm also not finished yet.

On the plus side, putting the piping in was easy, and I love the way that looks.  Silver lining.

Did I mention that I even PLANNED some seam ripping in this project that I haven't gotten to yet?  Since I wasn't sure how the finished skirt was going to lie, I haven't inserted the on-seam pockets yet, so I'll be doing even more seam ripping before this is done, because I am NOT going to spend all of this time on a dress that doesn't have pockets.  [Yeah, that's the part I wrote while I was still optimistically thinking I'd come back and add pockets.  We'll see if it drives me crazy not to have them.]

So with all that, here's how it turned out: 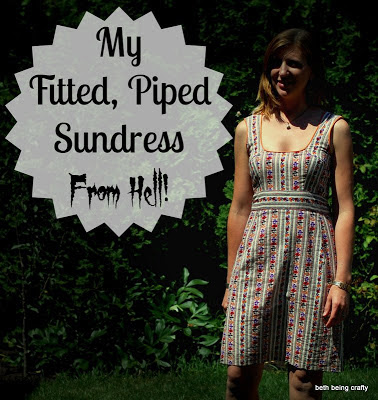 I started by printing out this pattern, which claims to be a size 6, but...I'm pretty sure she must mean size 6 TODDLER, because there was no. freaking. way this was going to fit my typically-size-4-to-6 body.  I should have known, looking at her photos, because she is clearly much tinier than me, but anyhoo.  I added four inches to EACH SIDE of the skirt.  EIGHT total inches.  And I actually really love the way the skirt fits now.  I can't remember exactly now, but I added I think somewhere in the neighborhood of 6 inches to the bodice, but there was a lot more tweaking going on up there so I'm not sure how much of that was the pattern's fault.  I also added the waistband, because the bodice pattern pieces I tried fitting together ended up being reeeeally short as well as not near big enough around, so rather than recutting them all longer, I just added the horizontal waistband strip, which ended up being one of my favorite things about the finished look.

Speaking of the bodice, though, I really wanted to have piping along the neckline and armholes, but once it was there it made adjustments to these areas really difficult.  So rather than taking things apart AGAIN once I figured out that the neckline that I cut was droopy, I did this:

Can you see how the piping is folded in on itself up there?  And harder to see is the seam going at an angle from the folded spot on the neckline down to a couple of inches under the armpit--that's just topstitched into place to keep it from bagging, and to hide an awkward bust dart.

Also, (and this one's really probably only obvious to me, so clearly I need to point it out): 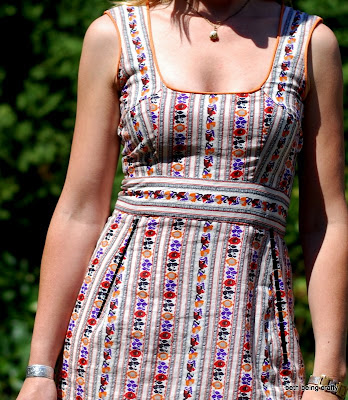 Somehow in my exhaustion, I failed to line the skirt up properly before attaching it, so the darts are not in the same place on both sides, nor does the print line up.  I highlighted the darts with a black dotted line above--see how the one on my left is way further over?  I vaguely remember now that when I was putting in the zipper, I had a lot more extra fabric on one side than the other...doh.  I totally didn't even realize this until I was putting the finished dress on.

Also, that waistband started its life about 2 inches wider than you see it now.  The proportion was just off, but instead of taking the skirt off I just tucked the waistband under and topstitched it down.  LAZY!  And now that I see that I attached the skirt crooked, it would have been even better to take the skirt off because maybe I would have lined it up right the second time around.


But in any case, it is finally done, thanks in no small part to the lovely Suzanne at D&T's Sewing.  She hosts a crafty social night on the first Friday of the month, which was motivation for me to haul it out and get it hemmed and over with.


I'm pretty glad I did too, because I wore it today and despite all of the issues that are mainly noticeable to me, I think it is a pretty flattering dress in a great fabric (it's a cotton lawn) with some nice details, and I think I will get some use out of it.  And I THINK I learned some things in the process--namely that I am not a pattern maker, so if a printed pattern isn't going to fit just start the heck over.
Posted by bethanycavanaugh@gmail.com at 10:26 PM