I decided that what The Boy really needed to complete his Easter outfit was an awesome jacket.  I found this free pattern in his size, and I found some interesting fabric for $1.50 a yard (more about that later), and with very little $$ at stake I thought it was worth a try.  I had a vision for how this jacket would turn out. Not sure if I accomplished it, but it definitely makes a statement. 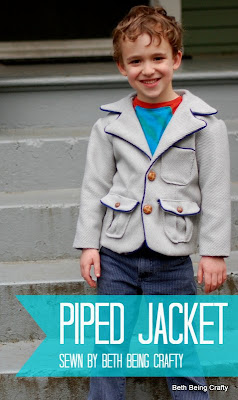 I don't know if "funky old man" was the statement I had in mind.  I really, really wanted to try piping.  I have seen so many cute boys coats that include piping, and I thought it would be a cool detail. I think in this coat though, with the jumbo lapels plus the kind of old-fashioned fabric I used, the piping was just a detail too far. 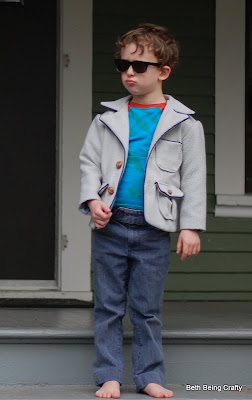 The Boy chose the buttons himself from the stash I got from the hubby's grandma.  I pulled out lots of buttons that I had four matching ones of-red, navy blue, antiqued silver--and he chose these retro brown ones. 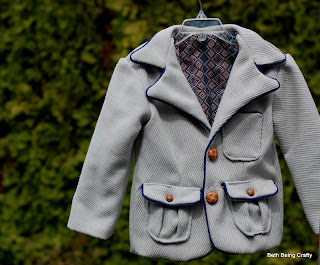 Now I'm really wishing I had included the elbow patches that are in the original pattern and gone all the way with this look! 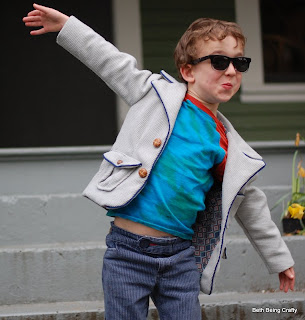 The biggest problem with the jacket is that it came out a little too small for my lanky guy.  My fault for not measuring--the pattern is supposed to be a 5/6, which is what he usually wears, but I should have checked. Mainly the sleeves were a little short.  I left out the back flap, so I should have widened the back panel a bit too, and I wasn't sure how to do the hem on the back since I was leaving out the flap, and I ended up cutting off some fabric that I shouldn't have cut, resulting in a slightly too-short jacket. 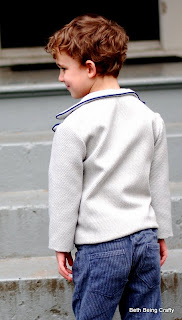 One of my favorite elements was the lining that I used.  I only had a remnant of this cool fabric, less than half a yard, so I was only able to line the body of the jacket with it. 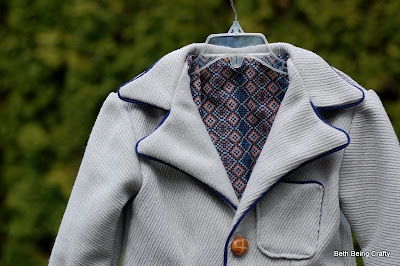 I used a different fabric to line the sleeves, and in retrospect I wish I would have pieced in some of that cool fabric at least for the cuffs, because when this jacket gets handed down to Little Sister I bet we'll need to fold the sleeves back at least for a little while. 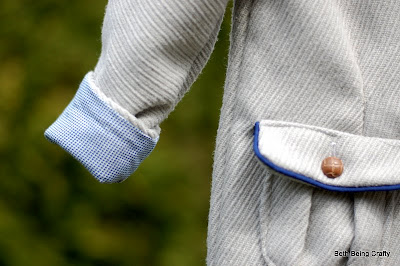 This was my first attempt at piping. It was much easier to do than I thought it would be! I followed this tutorial, for reference.  But because my outer fabric was so thick, adding the piping made the lapels reeeeeeally stick out.  It's thick.  And for some reason, I feel like the piping feminizes the jacket a bit.  Which will be nice when it gets handed down to Iris, but I'm not sure how it looks on a boys' jacket.  At least, on this pattern.  The original pattern didn't have piping, BTW--that was my own addition.  I bought one pack of piping (40% off coupon, so it was just over $1), and it just barely was enough.  Like, I was cursing my lax cutting for the pocket flap piping because it was soooooooo close on the collar and lapels.  But doable!

I am totally planning on trying this jacket in a simpler version with some adjusted sizing now that I know how the pattern fits my boy.

The directions were easy to follow with LOTS of pictures, and I love Sabra's writing style--it all made perfect sense to me.  I actually can't wait to do it again!


Oh, I mentioned that my fabric was only $1.50 a yard.  I bought it at Wal-Mart.  I pretty much only go there to check their $1.50/yard fabric shelves, which I assumed were clearance.  But as I chatted with the lady cutting my 14 yards of various fabrics (that I paid a total of $20 for, totally crazy!), she told me something that I'm not sure I can believe.  She said that the fabrics were not on sale, that was the regular price for that rack, but the reason it's so cheap is because the fabric company takes all of the remnants of similar colors, breaks them back down into fibers, and re-weaves them into these "unknown content" fabrics that are a combination of natural and synthetic fibers.  Does that sound right?  Or even possible?  If so, I think it's kind of cool--it's like recycled fabric.  And I was astounded by the pretty fabrics I found on this trip.  You'll be seeing more projects made from them soon.  Semi-sheer swiss dot, beautiful smoky chiffon, shimmery antique gold linen-esque stuff, white baby sweater-knit that totally feels like cotton, this bias-weave textured stripe that I made the jacket out of, and more.  I will totally keep checking back for that rack.

Back to the jacket, I do have a few pattern notes:

On the pleated pockets, the directions say to leave your hole for turning at the bottom of the pocket.  I did that for the first pocket, but on the second pocket I left the turning hole on the flat side at the top, and it was much easier--not to mention that the closed-up hole will be hidden by the flap so it doesn't need to be perfect.

I trimmed the points on the collar and lapel down by 1/2 inch or so.  Still looks huge to me!  I might use another jacket to help me figure out the shape I'd like next time.

Also, the collar wasn't quite tall enough for me.  Partially because my fabric is so thick (plus the piped edge), my collar won't fold down in the back on it's own.  I tacked it with thread, but next time I'd make the collar taller.


I skipped the back vent flap (Sabra mentioned she'd had some issues with getting it to lie flat), so I just cut my fabric on the fold for the back.  I should have cut the back a little wider since I left out the flap--Sabra said to move the pattern off the fold by 1" to add the width.  I think that would have been perfect.

I thought the sleeves looked a little wide in the photos, so I trimmed my pattern pieces down by about 1/2 inch.  I thought the width came out perfect.

I don't know if it was the way I cut it, or if I folded my pleated pockets in too much, or if it's just personal preference, but I thought the flaps for the pockets were too wide.

So, there you go.  I'll post pictures of the complete Easter outfits after we've all sported them!
Posted by bethanycavanaugh@gmail.com at 3:56 PM