When I was pregnant, I wasn't doing much sewing yet.  I learned to hand-sew doll clothes as a kid from my grandma, and then learned to use a machine in the college theater costume shop, but aside from sewing costumes for plays when I was a middle and high school drama teacher I hadn't done much sewing since college.  And I'd never done much in the way of sewing for myself.  Truly, nothing motivated me to get out the sewing machine like having a daughter--well, that, and Pinterest.  And since the girl was my second (and final) child, I never made any maternity stuff for myself.  And now, I keep seeing these great maternity projects on Pinterest and thinking, maybe I should get pregnant again so I can sew those things!  HAAAAAAAAhahahahahahaha oh my gosh I never want to be pregnant again.

Lucky for my, my dear dear friend IS pregnant!  YAY!!!!  I get to sew maternity stuff for her!  Oh yeah, and YAY that she's having a baby! But this is about me.


I saw this tutorial for turning regular pants into maternity pants on Pinterest, and it was from a blogger I liked, and I sent my pal a link to it to see if she had any pants she wanted me to try making over. And what do you know, she did!  A pair of too-big cords from the Gap and a pair of too-short-too-big jeans just languishing away.  We decided I would make the cords my guinea pig, and if they turned out I would hack into those Seven for All Mankinds.  Hmmm, in hindsight, maybe I should have just taken the Sevens for myself--they probably would have fit me just right!

The first step in the tutorial is to cut off the front two belt loops.  I have to give the Gap a slow clap for their belt loop attachment.  Those suckers are not just going to pull out on their own.  Of course, this is kind of a headache when making this particular transformation.  I didn't have a straight razor handy like the tutorial recommends--I think it would have helped.  The seam ripper took forever.

I started to get a sense of foreboding at this point, because when the part of the project that was supposed to be the easy part (Just take the belt loops off!  No big deal!) turns out to be a major pain in the butt, that rarely means that the more complicated parts will go more smoothly than anticipated.

But I needn't have worried!  Removing the belt loops was totally the worst part. As the tutorial mentions, you have to be careful when you're stitching around metal things (like the zipper and the rivets), but I just slowed down and hand-cranked through those parts and it was beautiful.  I used a denim needle and didn't have any issues.

I did do one thing differently from the tutorial.  Jessica from Running With Scissors, who created the tutorial, attaches the elastic waistband to the pants by lining it up exactly how it's going to lay when you're finished and topstitching the raw front edge of the jeans down to it (she then does a second row of stitching to really hold it in place).  I decided to try for a more finished-looking edge in the front of the cords, since I was making these for a friend.  I turned the waistband upside down and slid it over the top of the cords so that the raw edge of the cords where I cut them off was lined up with the raw edges of the bottom of the waistband.  Then I sewed them together right along the edge of the pants.  I had to be really careful near the rivets and the zipper because I couldn't see the metal as clearly as I could have if I'd done it Jessica's simpler way. Once I sewed all the way around, I flipped the waistband up into its correct position then topstitched another seam around the top of the pants, just to hold everything in place.


When I did the jeans, I realized that I didn't have to do it this way all the way around.  You don't cut the jeans in the back, so they look totally finished if you just tuck the waistband in and topstitch it down in the back.  But starting at the spot where I cut the front of the jeans down, I flipped the waistband and did it the same way I did the cords.  I was even happier with those results. 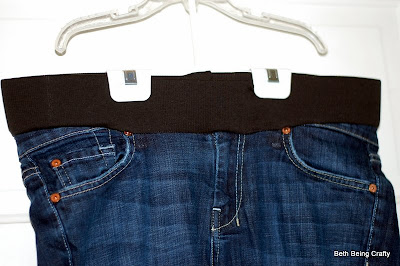 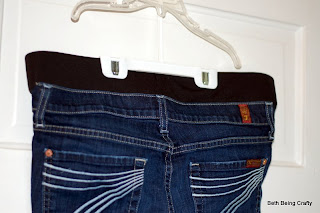 Oops, I forgot to take a picture of the inside of these.  Don't worry, they looked TOTALLY PROFESSIONAL.  I PROMISE.  (No, they didn't.)

But lookie here!  My friend dropped by wearing them, and I got to take some real photos of her modeling them for me--what a good sport.  They look like the real thing, don't they?  I'm so pleased!

The bonus is that those slightly-too-short pants turned out the perfect length, because the waistband drops the pants down just enough!  Anyway, if you didn't have pants in your own closet that you wanted to mangle, this would be a great use for thrift store pants too.  To make over the two pants, I bought a little over 2 yards of 2 inch elastic (with the coupon, that came to about $3) and I bought a remnant of black rib knit, which was another $3 or so.
Posted by bethanycavanaugh@gmail.com at 4:56 PM