So, totally too late to be helpful to anyone, but maybe you're planning early for next year...

This was a really easy DIY costume that was not too embarrassing for my husband to wear.

We went as Salt and Pepper. And when I say "went," I mean took the kids trick-or-treating in the neighborhood.  No fancy parties for us. So...I wasn't too motivated to pull out all the stops, you know what I mean?

I made the hats out of a gray button-down shirt that had silver metallic thread running through it.  I pulled it out of a free box a year or so ago and it's been sitting in my "to upcycle" bin.  I used another upcycling bin gray sweater to line it and make the band, because I wanted the band to have stretch and the woven fabric from the shirt was too thin to have structure on its own.  I didn't do any fancy lining though, I just cut out the pieces and laid them on top of each other and sewed the hat together as though they were one piece of fabric.

The hats also have black dots on top--hard to see in the picture. Sorry!  Oh wait--here you go: So maybe I'll add a few more dots further down the hats if we wear these costumes again.  You know, so that people can tell they are there when they are not suspended over our heads.

I cut the letters out of felt and used hot glue to stick them to these shirts that we already had.  Both of these shirts were rescued from my upcycling bin--good thing I hadn't started cutting any scraps out of them yet!

To make this costume even easier, you could obviously just buy gray hats and glue the dots on, but I didn't have any gray hats on hand and I wanted to spend zero dollars on this costume.  So, here's how I made the hats:

(Note:  I made the hats out of black fleece first.  Then they bore no resemblance to the tops of salt and pepper shakers.  So I remade them out of the silvery gray fabrics. But the process is the same.)

First, I cut the band to be slightly bigger than my head.  For me, that was a 24 inch band, for the hubby I needed 26 inches.

I divided that number in quarters and rounded up to figure out how wide to make the four "triangles" that would form the crown.  I made the ones for the 24" band 7 inches wide and the 26" band 7.5 inches wide, but I recommend 7.5 inches for either band length.  Mine was a little snug, and it would add to the rounded look of a shaker top if you had some extra width in the crown for gathering.

The "triangles" were 7 inches tall, and the sides of the triangle curve up slightly to the top.  The hats made from the ones pictured below came out a little pointy, so I made the curve a little wider when I made the gray hats.  More "arch", less "triangle," but still with a slight point at the top. 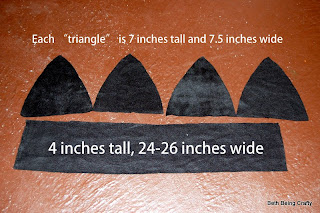 Sew the crown pieces together, right sides together, along the edges.  I pinned and sewed three of the seams first, like this: 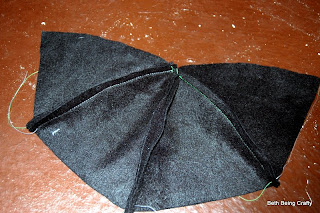 (If you want to sew your dots on rather than glue them, do it now--it's trickier once the four pieces are all the way closed up.)  Then I pinned the last seam together and sewed it to form the crown.

Then fold your band in half lengthwise, wrong sides together, and sew the loop closed. 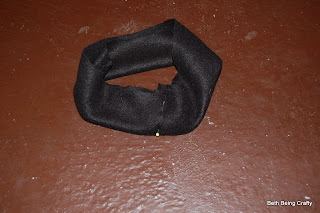 I just left my raw edges to the inside since it's only a Halloween costume, people, but you can finish yours more nicely if you like. 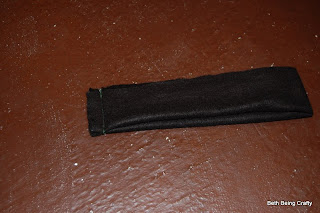 Next, turn the crown right-side out, and place your wrong-side out brim on the outside of that, with the raw edges all lined up. 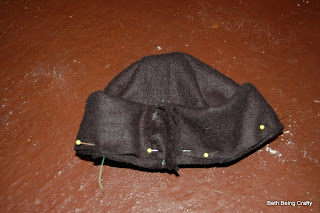 Sew around the raw edges, then flip the brim down and you're done!  Then you can glue on your dots to turn the hat into a shaker. 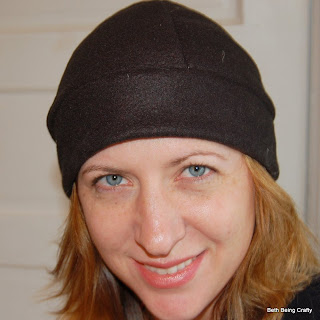 Or, you can just make this hat out of fleece, skip the dots, and have a comfy warm hat to wear.  No costume necessary.

Posted by bethanycavanaugh@gmail.com at 11:48 AM