I made a top a while back following the "Most Flattering Shirt Dress" tutorial from Prudent Baby, and I was really happy with the way it turned out.  I immediately made a dress version as well, and I love it!  I did the same kind of contrast "piping" edge using bias tape that I used when making my top--but this time I found a beautiful burgundy silk bias tape for 88 cents a yard.

It's great with a cardigan:

But of course I had to add pockets.  I just did a simple in-seam pocket, using a method like this one from BurdaStyle.

When I was about to add the elastic waistline, I realized that I planned to always belt this dress.  And I wanted options.  Sometimes a wide belt, maybe a skinny one; belt it higher on some days than others.  So I decided to skip the elastic waistline and just always use a belt to define the waist. That way I don't have to worry about the belt slipping off and exposing the elastic seams.  Leaving out the waistline eliminates the "most flattering" aspect of this dress, that's for sure--I won't ever be skipping the belt.  Another issue is that without the gathered waistline, you have to be careful to "gather" evenly yourself when adjusting your belt--the fabric can easily bunch under there.  I actually did go back and narrow the waist area a bit once I decided to skip the elastic shirring, which helps with the bunching some. 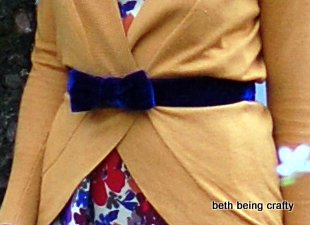 I'll do a tutorial on this belt soon--I had some scrap velvet from the hubby's grandma's stash, so I made a simple D-ring belt, but I put the d-rings in the back and tuck the tail end to the inside.  That way I can slip various decorations on the front. 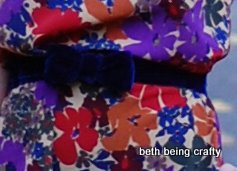 I started with this bow, and I also made a cluster of fabric flowers, but I'm not quite happy with the way it lays yet.  Once I've figured out some cute variations I'll post a belt tutorial, but in the meantime, I incorporated some of the ideas I found in these belt tutorials:

DIY Bow Belt from Momtastic
Bow Belt Tutorial from Dana's Fashion Blog (this one's in German, but between the photos and the Google Translate feature, I think I got the idea)

I can't wait to make more fun belts!  Oh, and on that subject, I have a question I've been meaning to ask.

Is this allowed?
It's just a patterned silk scarf, tied over the top of a t-shirt.  I felt like this outfit needed something, but I don't know if I can get away with pretending my scarf is a belt.  If I just make some more fabric belts, I won't have to worry about it I guess.

Oh, and as long as I'm throwing my belting questions out there--what do you do if you're belting over a cardigan, but you're also wearing pants that require a belt?  I fully wore two belts the other day.  Out in public.  Only one was visible, but still--I kept feeling like I was going to get caught.

So now you know my belting faux-pas.  I'm pretty sure there's a belting learning curve, but I'm getting better at it!
Posted by bethanycavanaugh@gmail.com at 10:23 PM