The Phoebe Bag (from www.rebekalambert.com)

I saw this bag in a blog post with links to several purse tutorials (several good ones in there), and at first glance I skipped right past it because it looked like it would be too complicated for me. Man, I am so glad I gave it a second look!  This is called the Phoebe Bag, and it's a free tutorial and printable pattern from Artsy Craftsy Babe--here's the link!

Not only am I really really happy with the way it turned out, but also the directions in the tutorial were really intuitive and easy to follow, the printable pattern is free, and you only need to buy 1/2 yard exterior fabric, 1/2 yard lining fabric, 1/2 yard fusible fleece lining, and a magnetic clasp, so it's a really affordable project. Especially if you have your fabrics in your stash, like I did--I spent $$2.40 on the fusible fleece and 66 cents on the clasp, so I feel like it was a great price for a birthday present for a friend (the reason I made this). I am so excited to make more of these, including one for myself. 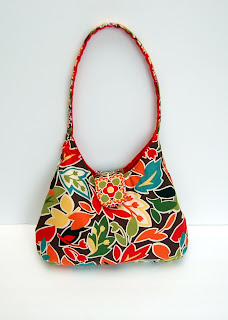 I bought these fabrics when I made my huge Amy Butler Birdie Sling, which is great for hauling diapers, snacks, water bottles, changes of clothes, and spare toys, but thankfully I don't always need all of that stuff anymore.  And since that Amy Butler pattern listed waaaaay more fabric than I actually needed (kind of annoying), I had lots of these three coordinating fabrics left over. I used the third fabric for the exterior of the handle and the flap.  Again, this was a perfect gift because I love these fabrics, but it would be a little silly to have a second bag that looks like the mini-me of my big bag, so I'll make mine in a different fabric.

I used the coordinating fabric for the interior pocket as well--and I added a seam to the center of the pocket (the pattern doesn't say to do that, but the pocket felt too wide to me otherwise). 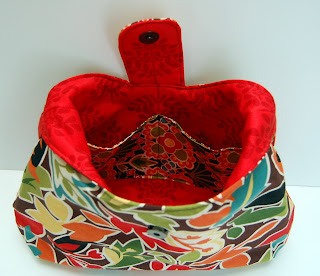 The magnetic clasp was really easy to install--I hadn't done one before, and the pattern doesn't really explain it, so I'll tell you what I did.  First, the fabric you put the clasp into should have fusible fleece or some other stabilizer so that the clasp won't tear through the fabric, since you'll be pulling on it to open and close the clasp.  This is one thing I would change about the pattern--it says to attach your fusible fleece to the lining panels, but the next time I do this I would attach them to the exterior panels since that's where you'll be attaching the clasp.  Since I didn't do that this time, I attached an extra little piece of the fusible fleece where I wanted the clasp to go.   I also cut out a rectangle of thin cardboard (maybe 1 1/2 by 2 inches) for a little more stability in the exterior of the bag--I really didn't want the clasp pulling out.  One half of the clasp goes into the underside of the flap, which has the fusible fleece, and the other goes on the exterior of the bag. The clasp has two prongs sticking out the back of each piece, so you press those into the fabric in the spot you want to install it to leave an indentation, then snip tiny holes in the fabric and stabilizer to shove the prongs through the fabric and the stabilizer (and the cardboard, if using--snip the holes in that ahead of time too).  Then slide the backing piece back into place and fold the prongs down.  The back side of the two halves of the clasp end up being covered by the other piece of fabric (the exterior piece of the flap and the lining piece of the bag).

It's a great size for when you're not hauling diapers around.


I made a few notes I made for myself while making this bag, so I'll list them for you here in case they are helpful to you.

1.  The pattern didn't specify if seam allowances were included so I assumed they were, and I like the finished size.
2.  The directions didn't say to do this, so it's probably obvious to most of you, but I had to think about it--you SHOULD trim off the little triangle you get when sewing the darts in the bottom corners.
3.   I already mentioned this, but I would iron the fusible fleece to the EXTERIOR panels rather than the lining, so you have that stability for attaching the magnetic clasp or snap.  Or, like the tutorial suggests, you could put fleece on both the exterior and lining panels, making a more structured bag.
4. I made the strap lining a little narrower than the strap exterior (just barely) so that it's easier to keep it from sticking out beyond the exterior fabric (personal preference).
5.  Since the fabric requirements are so small, wouldn't it be fun to make this out of a felted sweater?  Depending on how thick your wool was, you might not even need the stabilizer.

Anyway, I thought it was a fun and easy project with great results.  I can't wait to make my own, so it can be just how I want it--no more "I wish I could find a purse with this type of pockets" or "I just wish the strap was longer," you can customize it to be just how you want it!

Posted by bethanycavanaugh@gmail.com at 2:33 PM