This post should be sponsored by Pinterest, because this single project is an amalgamation of FOUR (wait, actually FIVE) ideas that I had pinned there. 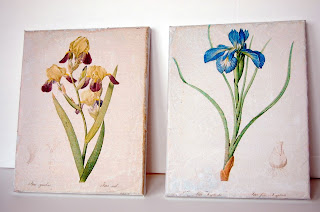 Pin #1: Since redoing Little Sister's bedroom, we've had some extra wall space. So when I saw this link to the New York Public Library Digital Image Gallery (free!), I went through and found these cool iris botanical prints. I wasn't sure how I was going to display them, but I thought they'd look neat on her wall.

Pin #2: Then I found a 3-pack of 8x10 canvases at Ross for $4.99, so I thought this would be a good opportunity to try this process of printing on tissue paper and using mod podge to apply the image to a canvas, allowing the canvas texture to show through the image.

Pin #3: I wasn't going to BUY mod podge though, so I used the stuff I made according to this recipe.

I followed the tutorial listed in Pin #2 exactly, I was so good. And it worked, but...

When I printed on the tissue, my printer got a few of these black gunky spots on my image. 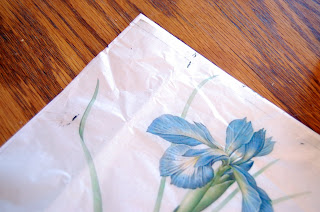 And this faint black stripe across the top. 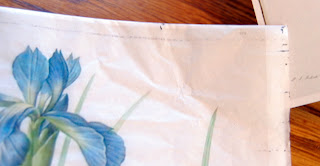 I thought maybe there was just some gunk in my printer, so I tried printing on normal computer paper, to make sure the gunk was all gone, and it didn't show up... 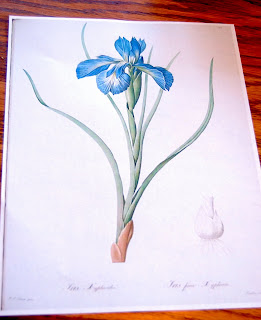 So I did another one on the tissue, but the gunk was back. It wasn't too bad, and mostly along the top so it was an area that was mostly being trimmed off in the end anyway, but kind of a bummer. Probably just my printer, but something to be aware of.

Anyway, smoothing out the tissue is kind of difficult, and mine tore in a couple of spots the first time around, so luckily I had my first trial tissue printout, so I used little pieces of that to patch the hole. 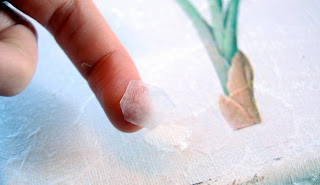 My next try went better--my advice is to use a VERY thin layer of the mod podge, because the wetter the tissue gets the more easily it tears.

But all in all, a quick and easy project--and I really like the way the canvas texture shows through, especially on this antique-looking botanical print. 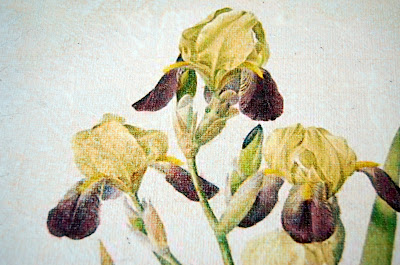 Pin #4: To hang these on the wall, I tried this technique, which works well as long as you can get the pop tab off the can with the little internal ring intact. The link above has a link to a method for getting the ring off every time, I guess.  To be honest, I don't even have this pinned--I remember seeing it on Pinterest, but couldn't find it there, so found the source directly, but for some reason it won't let me pin from that site?  I don't know.  Anyway, luckily we had pop tabs in the house from Liam's birthday party last weekend--normally we don't drink soda so the timing was right! 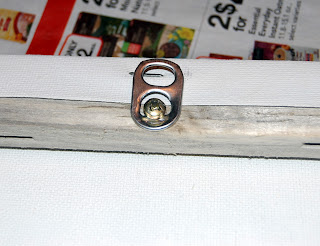 Here they are hanging on the wall above the changing table. Little Sister couldn't help getting in the picture.


And here they are straight on.


Pin #5: I had an extra canvas, so I tried this cool free printable I had pinned. I think it turned out good, but I do think the technique looks better with more "antique" types of images (to hide the imperfections better). This image is so clean it doesn't leave a lot of room for error.

Bonus Pin #6: Since we were having a pinterest kind of day, we went ahead and made these celery stamp pictures as well.

And then I made this crock pot shredded chicken with beans and salsa for dinner, also from Pinterest. How did I ever decide what to do with myself before Pinterest?  If you're not on there yet (and want to be), let me know--I'll email you an invite!

Posted by bethanycavanaugh@gmail.com at 12:16 PM