I can hardly believe it. Four years! That's the same amount of time I spent in college!  When did I get old enough to have a four-year-old?

I'm not so great with theme parties/decorations/coordinated thingamabobs, but I did my cheapskate/DIY best for this superhero party. As you may recall, we sent out these invitations: 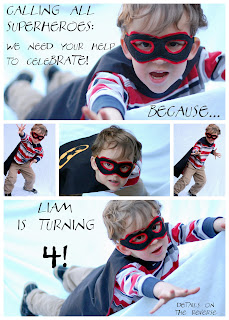 Luckily, all of the kids who were invited already had their own capes, so I just made masks to throw into the goody bags. The Boy chose colors for each friend, which was fun. 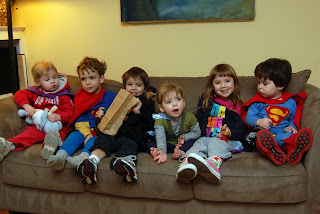 For goody bags, I printed out pictures of superheroes for The Boy to color, then we glued them to plain brown paper bags. This solved the problem that I was having finding any mixed superhero party supplies--everything was a 12-pack of Spiderman OR a 12-pack of Batman OR Superman, and we love them all! 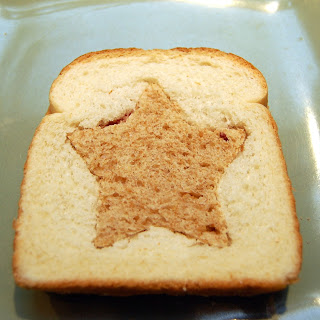 Unfortunately, I was totally not thinking about blogging this party, so my pictures are pretty lame from a "here's what I did" standpoint.  Below, Batman and Superman are standing next to one of the party games--I put a dark sheet over a card table and called it The Batcave (you can see the edge of it there on the left).  I threw some glow-bracelets in there and told them they had to find their power bracelets in the batcave.   You can also see our party decorations on the wall--I printed out extra superheroes for The Boy to color and we stuck them all over the place. 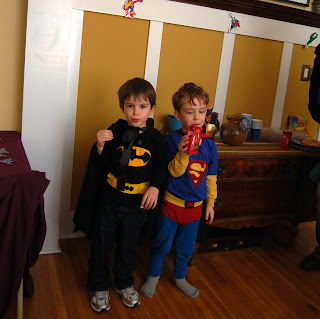 Our other party "activity" was to find the villains (more colored-in computer printouts) hidden around the room.  Each one had a "treasure" that he/she had stolen for the superheroes to rescue.  These were little gold boxes (an 8-pack from the dollar store), and each had a big plastic ring and a prism thingy inside it (also 8-packs from the dollar store).

I couldn't resist the adhesive mustaches I found at the dollar store, so I figured they could be "alter-egos" for any of the adults who didn't feel like coming in their superhero clothes.

And then there was the cake.  Oh, this cake.  I can't believe I wasn't thinking about blogging, because this was seriously the ugliest cake I have ever seen, and I didn't take any pictures of it before we attempted to rescue it.  So far, I have yet to bake a cake for a kids' birthday party--I just always feel like I have enough other stuff to do, and up until now we have gotten such great bakery decorations that I didn't even want to worry about it.  But this year, The Boy had really specific requests for his cake (various superheroes fighting bad guys), and there were all kinds of rules at the bakery (no licensed characters, no putting figurines on the cake that I brought in in case they weren't food grade, no improvising based on the book of sanctioned designs, etc) and I ended up reaching what sounded like a good compromise with the decorator over the phone--she would frost the cake using the "construction" scene, which had some hills and grass that I could use to place my figurines and stage a "fight" once I picked up the cake.  I had asked for bright colors for the writing.

But when we picked it up, this cake was...well, the hubby referred to it as "the dog park cake."  It was army green and brown swirls, with big piles of brown in the corners that resembled nothing so much as what you might see in the dog park before a responsible dog owner takes action.  I can't BELIEVE I didn't take a picture.  And then it had the same army green writing with The Boy's birthday wishes on it.

So we scraped off the brown frosting piles, poked our random assortment of superhero paraphernalia on top (along with a couple of dollar store ninjas, the best I could do for bad guys), used some old frosting tubes to add some "POW!"s and "BAM!"s, and even though it was still the worst birthday cake I'd ever seen, The Boy was totally impressed, so I guess it all worked out okay. 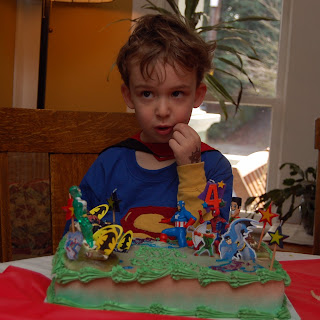 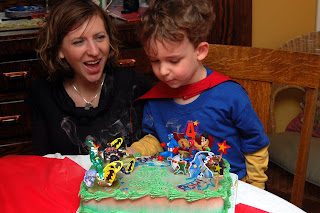 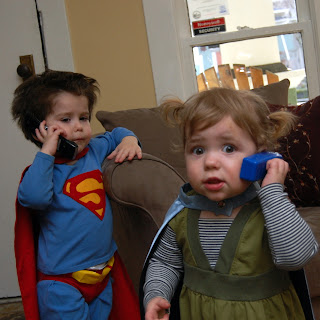